A Life-Line for the Pedagogic Goose: Harnessing the Graduate Perspective in Arts Education
Next Article in Special Issue

Japan in Spain. Japanese Culture through Spanish Eyes in the Film Gisaku
Previous Article in Journal

Intertextuality and Mise en Abyme in Nobuhiro Suwa’s H Story and A Perfect Couple. Between European Modernity and Japan

The Western ‘discovery’ of Japanese cinema in the 1950s prompted scholars to articulate essentialist visions understanding its singularities as a result of its isolation from the rest of the world and its close links to local aesthetic and philosophical traditions. Recent approaches however, have evidenced the limitations of this paradigm of ‘national cinema’. Higson (1989) opened a critical discussion on the existing consumption, text and production-based approaches to this concept. This article draws on Higson´s contribution and calls into question traditional theorising of Japanese film as a national cinema. Contradictions are illustrated by assessing the other side of the ‘discovery’ of Japanese cinema: certain gendaigeki works that succeeded at the domestic box office while jidaigeki burst into European film festivals. The Taiyōzoku and subsequent Mukokuseki Action films created a new postwar iconography by adapting codes of representation from Hollywood youth and western films. This article does not attempt to deny the uniqueness of this film culture, but rather seeks to highlight the need to reformulate the paradigm of national cinema in the Japanese case, and illustrate the sense in which it was created from outside, failing to recognise its reach transnational intertextuality. View Full-Text
Keywords: national cinema; transnational Japanese film; taiyōzoku; mukokuseki; ‘kimono effect’; youth icons; postwar film festivals national cinema; transnational Japanese film; taiyōzoku; mukokuseki; ‘kimono effect’; youth icons; postwar film festivals
►▼ Show Figures 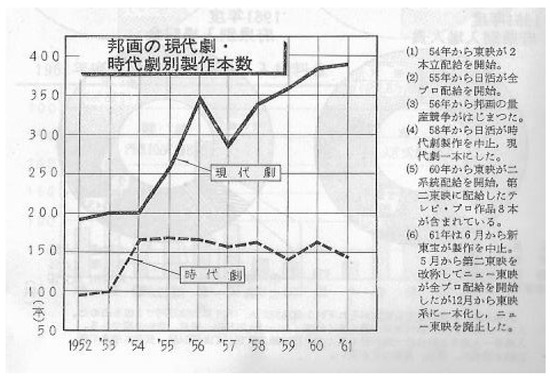