The optimal control of heating, ventilation, and air-conditioning (HVAC) systems in buildings can save a substantial amount of energy. Many variables can be controlled in buildings to achieve energy savings and operating an HVAC system with the optimal control variables within the operating conditions of the system is critical for saving energy and improving the system’s overall performance and efficiency. Researchers have conducted numerous studies in attempts to achieve such optimal control. The effectiveness of several typical control methods of HVAC systems has been demonstrated in a number of studies; these methods include near-optimal control [1], the ‘proportional integrated derivative’ approach [2,3], and model predictive control [4,5,6]. Recently, as the amount of data and information that can be obtained from buildings has increased significantly and the computational performance of computers has improved, researchers have actively employed artificial intelligence or machine learning techniques to optimize and control HVAC systems [7,8,9]. Among the machine learning techniques, genetic algorithms (GAs) are known to be suitable in complex conditions, such as large amounts of data and parameters, and are especially suitable for the optimization of HVAC systems in buildings [10,11].
In previous work, the authors conducted studies of optimal HVAC control methods using GAs that were applied to both a variable air volume (VAV) air-conditioning system and chilled water system to optimize the control variables in each system [12,13]. Two control variables for each system were analyzed in terms of time units, and the energy savings of the entire system for the cooling period were compared with the energy savings per component. Although the VAV air conditioning system and the chilled water system were divided into separate systems because they are composed of separate loops, the subsystem concept of an HVAC system affects its performance at the system level. So, with regard to the entire HVAC system, changes in the control variables and energy savings rates can show different characteristics according to changes in the setting or number of the control points.
The study of optimization using GAs is suitable for optimization of the complex composition of building and HVAC systems, and has already been verified in previous studies [9,12,13,14,15].
However, it has not yet been resolved whether the combination of the location or number of control points among the multiple control variables is more efficient when optimizing using GAs. When applying control to buildings, it is also very important to provide appropriate adjustment of control variables, and it is necessary to apply a control scenario in many cases and compare the effects of control. Based on the results of this study, a guide can be provided for selecting each effective combination of control variables and an adjustment within the HVAC system.
As a follow-up to our earlier studies [12,13], the main purpose of this study was to compare the characteristics of different optimal control methods by combining the two methods (air-side and water-side) with additional control variables in an HVAC system’s controllable points during cooling periods and organizing the control scenarios by setting and variables of the control points in the HVAC system. The method for deriving the optimal control variables for an HVAC system uses a GA in the same way as in the previous studies [12,13]. The main control variables in a ‘combined’ HVAC system that consists of both a VAV system and a chilled water loop are the supply air temperature, duct static pressure, chilled water supply temperature, and pump differential pressure, all of which are controlled simultaneously for the proposed optimization. After constructing three optimal control scenarios according to the setting and type and number of control variables, we compared the changes in the control variables and the energy savings percentages during the cooling season for each control scenario.

In order to derive the optimal control variables to save energy for an HVAC system using a GA, several input data for driving the optimization algorithm are required. In this study, a reference building proposed by the United States Department of Energy’s Building Energy Codes Program [16] and ASHRAE (American Society of Heating, Refrigerating and Air-Conditioning Engineers) Standard 90.1 [17] were simulated using EnergyPlus 8.9.0 to evaluate the model building’s energy performance. Among the choice of reference buildings, we selected the Large Office Building [18,19,20] of Commercial Prototype Building Models. The location of the building, weather data, internal heating, and operation schedule of the facility system all can be used to predict the airflow supply in the building. These variables were changed under the same conditions and used in a prior study to fit a domestic situation [12], energy consumption prediction [19], and optimization of a VAV system [12]. Table 1 summarizes the major information and simulation conditions of the reference building used also in the current study.
The human factor, such as the number of occupants and behavior [21,22], should be considered important because of its huge impact on the energy performance of buildings. In this study, the suggested typical occupancy schedule and metabolic rate in the ASHRAE model were used.
The reference building is divided into 19 zones, of which conditioned zones are 15 zones excluding basements and plenums. All conditioned zones are the same set point. Figure 1 shows a 3D view of the reference building used in this study.
The weather data were converted from the test reference year (TRY) format in Seoul to the EnergyPlus Weather (EPW) file format; the time-step used to generate the data was one hour. The simulation period for the reference building was 2928 h of data from May to September.

In this study, we employed the design conditions of the building and the operations provided by the system manufacturer (Trane Commercial HVAC) to select the ranges of the upper and lower limits, which are within the selection range of the solution, as controllable values while the actual system is operating. The control ranges were set in accordance with the literature and based on design conditions and actual measurements. Table 2 shows the ranges for the calculations of the control settings and GA set used in this study.

This study investigated how changes in the setting and type and number of the control variables affect the energy savings of the HVAC system during optimal control operations. Table 3 shows that the three operation scenarios (cases) of the HVAC system were constructed by changing the configuration of each control variable in order to understand the control characteristics.
‘Normal’ operations of a HVAC system, i.e., without any optimal control scenario, are considered to be as follows: supply air temperature of 12.8 °C, duct static pressure of 474 Pa, cold-water supply temperature of 6.7 °C, and pump differential pressure of 78.05 kPa.
Case 1 optimizes and controls the air-supply variables, i.e., the supply air temperature and duct static pressure. The other control variable is used as the set-point operation, which is a feasible control method for a building installed with a VAV system.
Case 2 optimizes and controls the water-side control variables, i.e., the cold-water supply temperature and pump differential pressure. The other control variables are operated as set-points. This control method can be applied when the chiller and the cold-water pump are controlled during cooling when using a chilled water system in a building.
Case 3 is a method to optimize all the control variables selected in this study at the same time.
The results of the optimal control operations for each scenario were analyzed by observing the changes in the optimal control variables calculated using the GA. The energy savings effects were evaluated by comparing the energy consumption of the HVAC system during normal operations with a certain control value and at the optimum control operation for each case. The target period of analysis was from June to September, which is the general cooling period applied in this study for the Seoul area.

Figure 7 shows the pump pressure differences associated with operation conditions from June to September. Both optimal control case 2 and case 3 operated while maintaining a lower value than the set value of 78.05 kPa, which is the difference in pump pressure during normal operations and the design value. The pump pressure differences for case 2 and case 3 averaged about 26.10 and 29.04 kPa, respectively. These scenarios can cool the reference building by maintaining a low chilled water pump pressure. When a low differential pressure is maintained in the chilled water loop, cooling is possible even with a small flow of cold water during operation of the HVAC system, which also results in the reduction of the head of the chilled water pump.

Figure 8 shows comparisons of the monthly energy consumption for normal operations as well as for each optimal control operation scenario from June to September, the period of analysis. Of all the optimal control operations in these months, case 3 saved the most energy by approximately 23.9% to 27.2%, case 2 saved approximately 16.6% to 17.53%, and case 1 saved approximately 4.2% to 9.6%. In other words, case 3, which uses all four control variables, had higher energy-saving percentages than case 1 and case 2; that is, as the number of control variables increased, the energy savings percentage also increased. The monthly energy saving ratios for case 1 and case 3 showed a difference of more than 2–3% in June and September compared to July and August when the cooling load was large, while case 2 showed similar savings rates within 1% of all months. The method of controlling the heat source side showed a constant variation in energy savings regardless of the change in cooling load.

Figure 9 shows a comparison of the overall energy consumption under normal operations and under each optimal control operation scenario from June to September, the period of analysis. The total energy consumption comparison also confirms the energy savings effect due to an increase in the number of control variables. Although both case 1 and case 2 were controlled using only two control variables, the energy savings ratio differed by more than 10% due to the larger proportion of energy consumed by the chiller than the AHU (including the fan) in the target building.

This work is supported by the Korea Agency for Infrastructure Technology Advancement (KAIA) grant funded by the Ministry of Land, Infrastructure and Transport (20AUDPB099686-06).

The authors declare that there is no conflict of interests regarding the publication of this article. 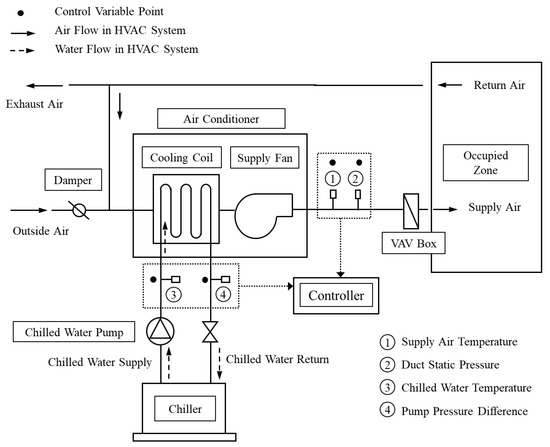 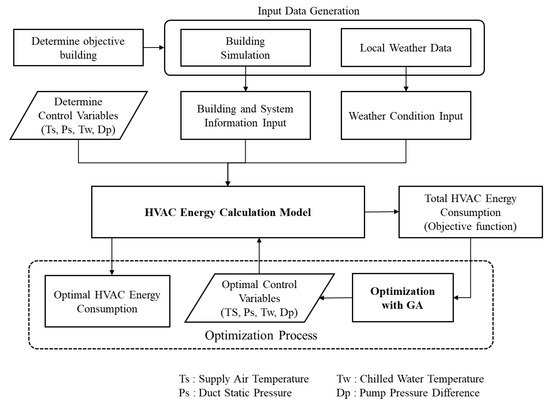 Table 3. Optimal control scenarios.
Table 3. Optimal control scenarios.
© 2020 by the authors. Licensee MDPI, Basel, Switzerland. This article is an open access article distributed under the terms and conditions of the Creative Commons Attribution (CC BY) license (http://creativecommons.org/licenses/by/4.0/).
We use cookies on our website to ensure you get the best experience. Read more about our cookies here.
Accept
We have just recently launched a new version of our website. Help us to further improve by taking part in this short 5 minute survey here. here.
Never show this again