The chemical composition of the two lab cast materials is presented in Table 1. Both materials have an identical composition, apart from the Mo content. Subsequent to casting, the materials were hot rolled to an overall thickness reduction of 84% in seven rolling passes. The materials were further austenitized for one hour at 890 °C to reach full austenitization and were quenched in water. The low Mo material was then tempered for one hour at two different temperatures, 670 and 700 °C, generating two different materials, i.e., low Mo (A) and low Mo (B), respectively. The high Mo material was tempered for one hour at 700 °C. A 0.2 offset yield strength (Rp0.2) of 638 MPa for the low Mo (A) material, 554 MPa for low Mo (B) and 706 MPa for the high Mo material was determined by performing tensile tests.
The materials were cut in samples with dimensions of 30 mm length, 10 mm height, and 4 mm thickness. All the sides of the samples were ground and polished to 1 µm. Immersion tests were conducted at 25 °C in solution A of the NACE test TM0284 [21]. This consists of 5.0 wt % NaCl (VWR, Leuven, Belgium) and 0.5 wt % CH3COOH (VWR, Leuven, Belgium) in deionized water, produced by a Milli-Q Integral System, saturated with H2S from Air Liquide with a global purity >99.5% (max. impurities 500 ppm CH4, 3000 ppm Carbonyl Sulfide (COS)). Prior to saturation, the test solution was deaerated with N2 gas from Air Liquide (purity > 99.99%) for 40 min. After saturation and before the start of every test, the pH of the testing solution was measured to ensure that the value was below 2.8. The pH was measured after every test as well, to check if the value has not increased above 4. Samples were then removed from the vessel after 1, 2, 3, 4, 5, 7, 14, 21, and 28 days. This was performed via special in-house designed shaft, which allowed for the removal of samples without interrupting the test.
In order to study the morphology and to determine the chemical composition of the corrosion products, SEM images were taken of the surfaces and cross-sections of several samples, using a JSM-7600F FEG SEM of JEOL (JEOL, Akishima, Tokyo, Japan). Before the analysis of the cross-sections, the sample was ground and polished to 1 µm. To further characterize the features of the corrosion products in more detail, EPMA was performed, using a JXA-8530F set-up of JEOL (JEOL, Akishima, Tokyo, Japan). Additionally, the samples were analysed with XRD (Bruker, Karlsruhe, Germany) using a Siemens D5000 diffractometer with Mo Kα radiation to identify the formed corrosion products.
Hot extraction experiments were performed using a G8 Galileo with Thermal Conductivity Detector (TCD) from Bruker (Bruker, Karlsruhe, Germany) at 300 °C to determine the amount of diffusible hydrogen, according to the definition for diffusible hydrogen, as proposed by Wang et al. [22], and frequently applied since [23]. After extracting the samples from the vessel, they were stored in liquid nitrogen to minimise the loss of hydrogen. Prior to the hot extraction measurements, the samples were thoroughly ground, using a rotary tool, to remove all of the corrosion products and rinsed with acetone.
The materials were also electrochemically charged to determine the hydrogen content. This cathodic charging was performed for one hour, using a 0.5 M sulfuric acid aqueous solution containing 1 g/L thiourea at a current density of 0.8 mA/cm². After charging, the materials were rinsed with water and acetone, dried, and the hydrogen content was measured using hot extraction, as described above.
Weight loss measurements were performed using the ASTM G1-90 solution, also known as the Clarke solution [24]. This consists of concentrated HCl with 2 wt % Sb2O3 and 5 wt % SnCl2. The samples were scrubbed before they were put in the solution for 30 min, while vigorously stirring, and rinsed with acetone.

The authors wish to thank the Special Research Fund (BOF) (BOF15/BAS/062 and 01P03516) and Ghent University. The authors also acknowledge the technicians and staff working at the sour laboratory at OCAS (ArcelorMittal R&D Gent) and the technical staff from the Department of Materials, Textiles and Chemical Engineering, Ghent University, for their help with the experiments and sample preparation. 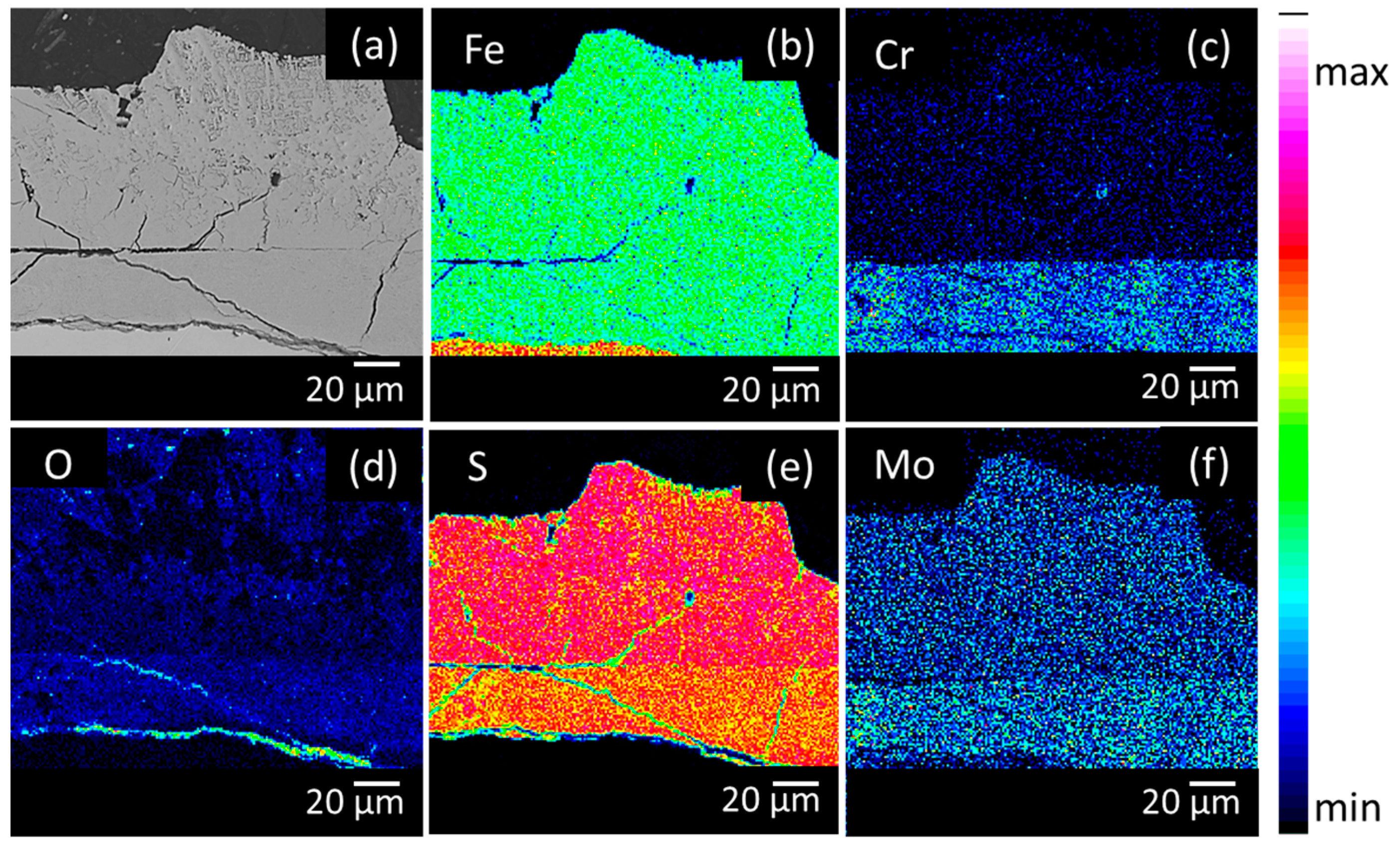 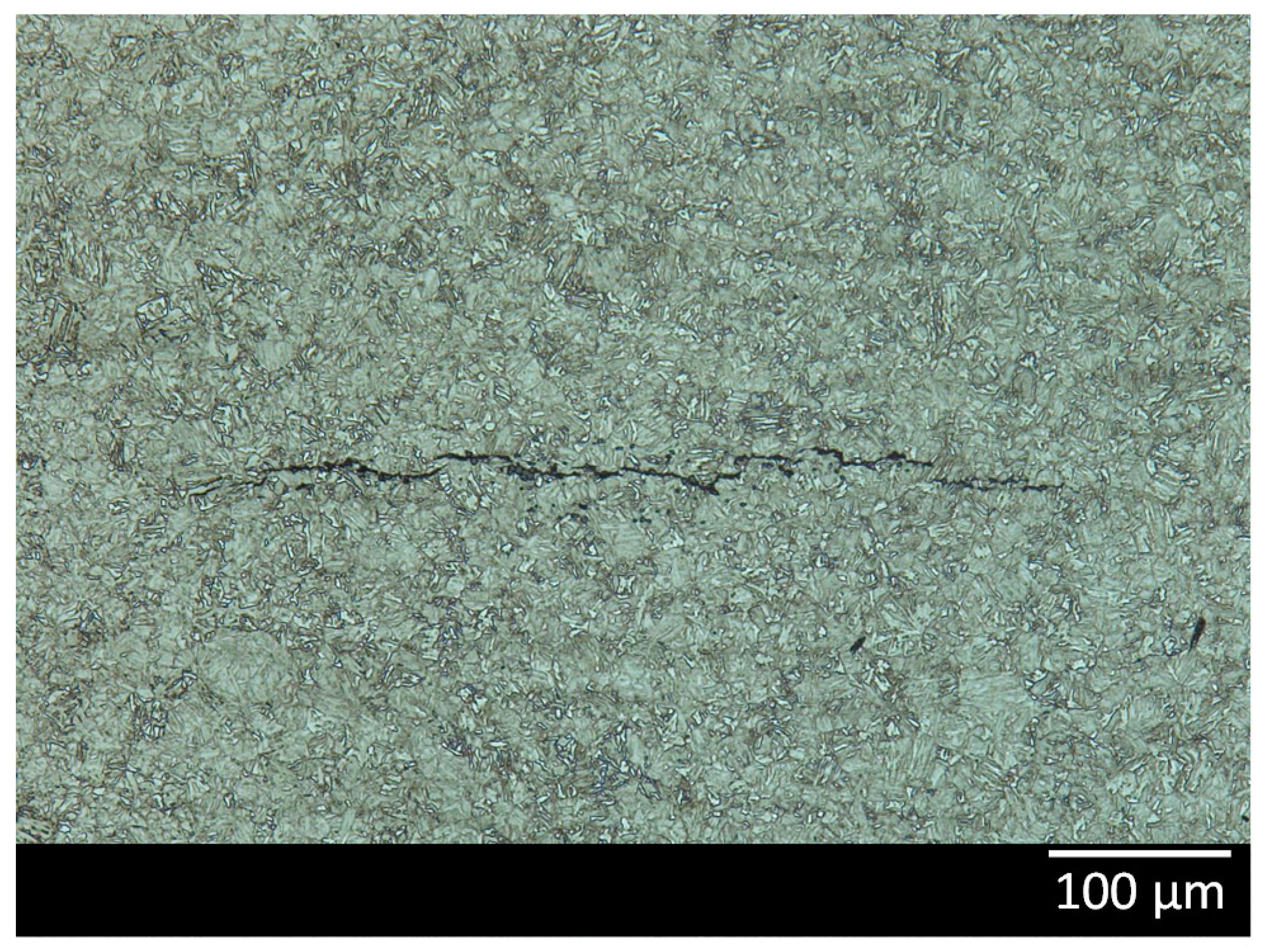