The size of the welding specimen used in this study was 150 mm × 300 mm and the weld joint shape was a lap fillet joint. The overlap length was fixed at 25 mm and the weld length was 300 mm. In order to fabricate various shapes of welds during GMAW, the welding process, wire feeding speed, and joint shape were changed. The four different types of welds with different shapes were fabricated by controlling the welding parameters. The details of the welding methods and conditions are shown in Table 3.
In the case of type 1, the base material with 2.3 mm thickness was used for the lap fillet joint of geometry A as shown in Figure 1a. In this case, the welding process used a tandem metal active gas (MAG) welding process. MAG direct current (DC) is applied to the leading torch and a MAG DC pulse is applied to the trailing torch. The wire feeding speed of the leading MAG and trailing MAG was fixed at 3 m/min and 4 m/min, respectively. Type 2 was welded to the same material and type of joint as type 1. Single MAG DC was applied to the welding process, and the wire feeding speed was 7 m/min, which was equal to the wire feeding speed of type 1. In the case of type 3, welding was performed on the joint shape of geometry B, as shown in Figure 1b, using a base material with a thickness of 2.6 mm. The tandem MAG welding process was applied, and the wire feeding speed was fixed at 3 m/min for the leading MAG and 5 m/min for the trailing MAG. Type 4 used the same base material and joint shapes as type 3. The welding process used was a single MAG DC and fixed at a wire speed of 8 m/min. In all types, the welding speed was fixed at 80 cm/min, the working angle was 45°, and the shielding gas was 90% Ar + 10% CO2. As mentioned above, for the tandem MAG process, two gas metal arc welding (GMAW) processes were applied. Under the tandem MAG process, the shape of the welds varies greatly depending on the angle and distance between the wires. In this study, the angle between the wires is 40°, in which the drag angle of the leading MAG is 20°, the push angle of the trailing MAG is 20°, and the distance between the wires is fixed to 5 mm, as shown in Figure 2.

During arc welding of the zinc-coated steel sheet, zinc is vaporized and defects occur inside and outside of the weld as shown in Figure 3. In this study, the fatigue test specimens were obtained in the welds without any weld defects through the visual inspection and radiographic test of welds. Fatigue test specimens were prepared in accordance with ASTM E-466. The fatigue tests were carried out with an INSTRON 8801 (Instron, Norwood, MA, USA) with a 5-ton capacity, as shown in Figure 4. In Figure 4, a schematic diagram of the stress loading during the fatigue test, Smax means the maximum load in the fatigue test, Smin means the minimum load, and the stress range Sr means Smax − Smin. Mean stress is the maximum load (Smax) and the minimum load (Smin) mean value. In this study, the Y axis of the S–N curve is expressed as max load stress (Smax). In the fatigue test, the load stress decreased by 60% to 10% compared to the tensile strength (610 MPa) of the base material, and the maximum stress was decreased by 5% at 20% load stress or less. The fatigue test was repeated three times for the same load stress to ensure reliability. The frequency of the load stress was 20 Hz and the fatigue test was performed under the condition of the stress ratio of the minimum loading to the maximum loading stress (R = Smin/Smax), which was tested to 0.1 in the sine waveform. The fatigue strength was set to the maximum stress-satisfying fatigue cycle, reaching 2 × 106, which was regarded as the permanent fatigue limit value in the general weld fatigue test. When comparing the fatigue strengths of different components subject to a similar loading, it is convenient to express fatigue strength in terms of the stresses corresponding to particular lives, for 105, 106 and 107 cycles on the S–N curve. The choice of reference life is quite arbitrary. Traditionally, 2 × 106 cycles have been used, and indeed some design codes refer to their S–N curves in terms of the corresponding stress range. For these reasons, in the discussion later in this study, the fatigue strengths of the welded joints in steel at 2 × 106 cycles are taken as a basis for comparison [14].

Figure 5 shows the weld bead shapes and cross-sections of the weld according to the four welding conditions in Table 3. In all types of sample, good weld beads could be obtained. It was difficult to distinguish bead shape differences according to joint geometries A and B. However, weld beads of type 1 and 3 using a tandem MAG process show a more gentle slope than that of type 2 and 4 using a single MAG process, as shown in Figure 5.

As mentioned above, the welds showed similar tensile shear strengths, but dissimilar fatigue strength and life. Figure 6 shows the S–N curve for each weld type. As can be seen in Figure 6, the S–N curve is different depending on the weld type. Fatigue strength was 110 MPa for type 1, 122 MPa for type 3, and 62 MPa for types 2 and 4. The highest fatigue strength values were obtained from type 3. In order to analyze the fatigue behavior of the material, it is also necessary to investigate the correlation between the fatigue strength and the thickness of the material. The thickness of the base material of type 4 is 2.6 mm, which is larger than that of the base material of types 1 and 2. In the case of butt welding, it is known that the fatigue strength increases as the thickness of the base material increases. However, lap fillet joints exhibit different behaviors compared to the butt joint. In the case of type 4, the fatigue strength was 62 MPa which was lower than that in type 1 or the same as type 2, even though the thickness of the base metal was thicker than types 1 and 2. The reason for this is that when the lap fillet joint is welded, the stress concentration effect on the welded part is considered to be more dominant than the effect of the base metal thickness compared to the butt joint. The fatigue strength of the overlap joint with fillet welds presented in the International Institute of Welding (IIW) specification is a double overlap joint, which is different from the case of this study. However, in the case of the overlap joint proposed in the IIW specification, stress is concentrated on the weld toe, and the toe crack is generated. In this case, it is stated that the fatigue class (FAT) 63 should be satisfied. In addition, it has been proposed that if the stress is concentrated on the weld throat and a root crack occurs, it should satisfy FAT 36 [15]. For comparison with this study, FAT 63 and FAT 36 are presented in Figure 6. In the case of tandem MAG welding, the shape of the weld bead tended to be more gentle and wider than that of single MAG. The fatigue strength was improved as the shape of the weld bead became gentler and the fatigue life was increased at the same maximum stress. For this reason, it is considered that the slope of the fatigue line is reduced compared to the single MAG when welding with tandem MAG. Therefore, the slope of the fatigue line varies depending on the welding process.
Figure 7 shows the cross-sections of the fatigue fracture of the welds according to each type of load stress. The fatigue fracture occurred in the weld throat at 183 MPa or greater in type 1, 122 MPa or greater in type 2 and 4, and 244 MPa or greater in type 3. Also, the fatigue fracture of the weld toe occurred at 122 MPa for type 1, 92 MPa for type 2 and 4, and 183 MPa for type 3. As shown in Figure 6, the cracks in the weld throat satisfy the line of FAT 36 and the cracks in the weld toe satisfy the line of FAT 63. In fatigue tests of the lap fillet joint, besides tensile stress, a secondary bending moment is also present. In the case of higher loads, the effect of the secondary bending moment at the weld root increases, and at low stress, the influence of the secondary bending moment becomes relatively smaller, and therefore the position of the stress concentration changes from the weld root to weld toe [4]. A high-speed camera was used to confirm the crack initiation point due to load stress during the fatigue test.
Figure 8 shows images taken with a high-speed camera in the type 2 specimen during the fatigue test at load stresses of 92 MPa and 366 MPa. The shooting speed of the high-speed camera was 1000 frames per second. Figure 8a shows the fatigue crack initiation at the weld toe when the load stress was 92 MPa, and Figure 8b shows the fatigue crack initiation at the weld root at the load stress of 366 MPa. As mentioned above, if the load stress is low, the stress is concentrated on the weld toe, and if the load stress is high, the stress is concentrated on the weld root and the crack is initiated and propagated.

This work was supported by the Ministry of Trade, Industry and Eergy (MOTIE, Korea). 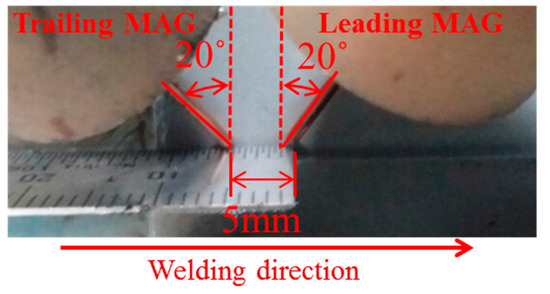 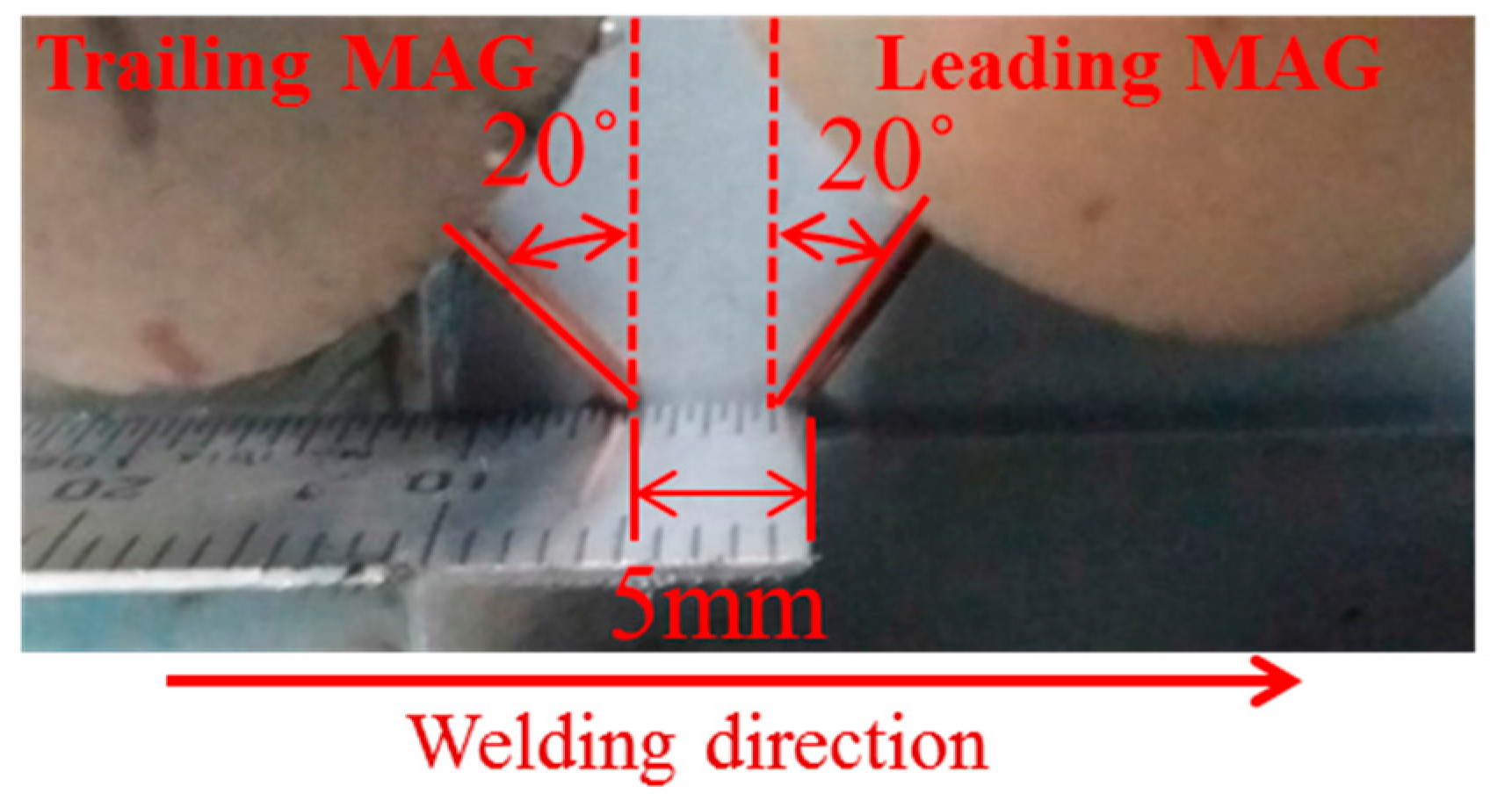 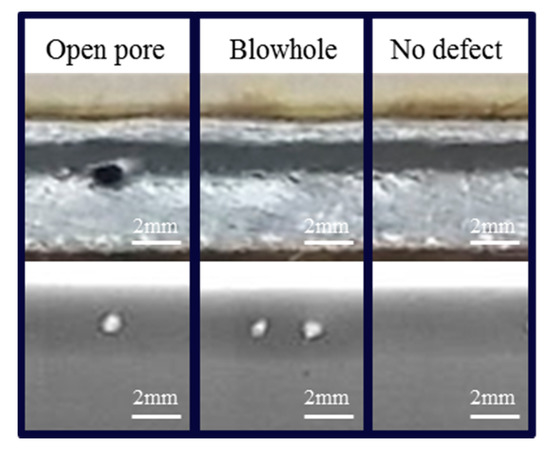 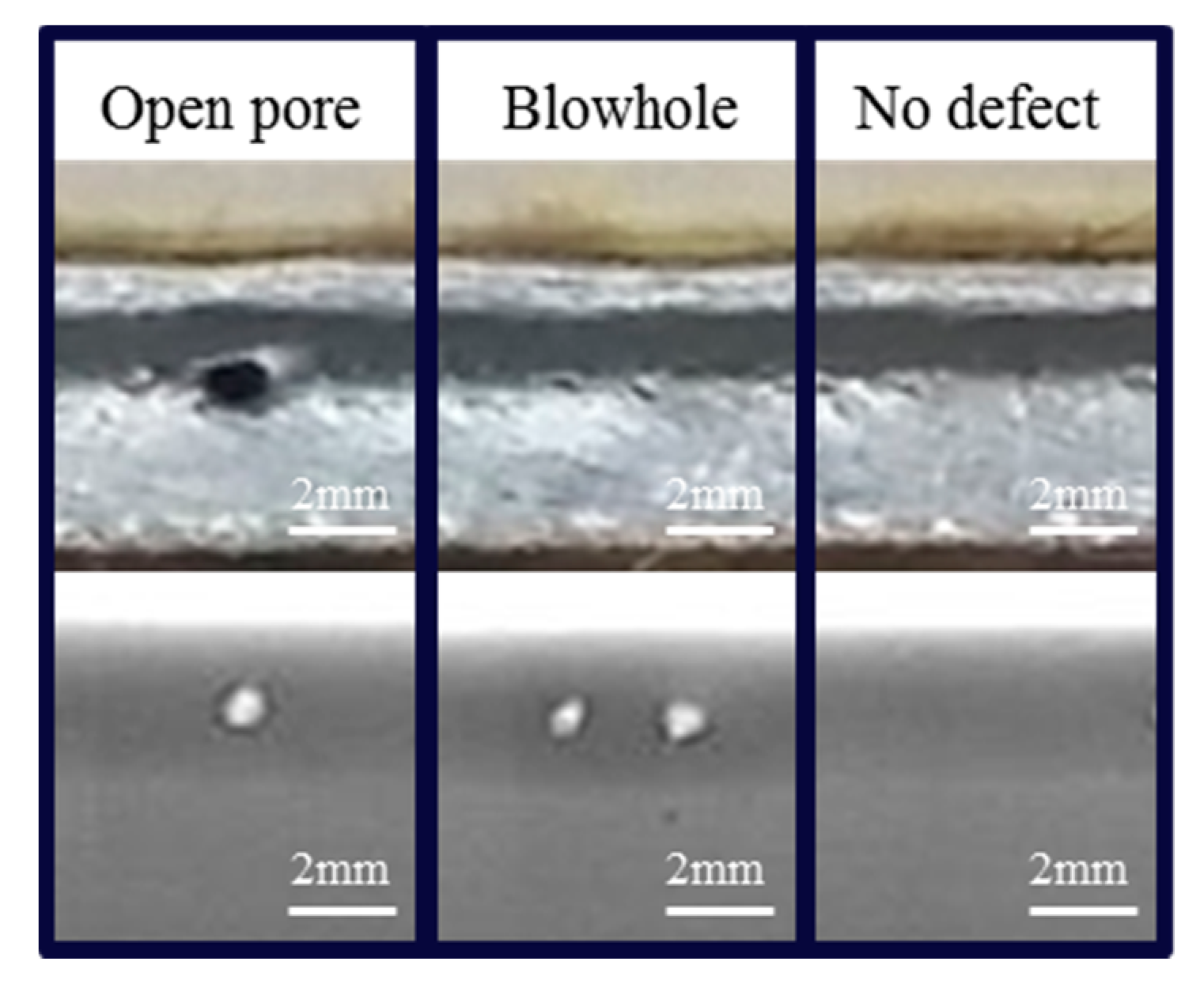 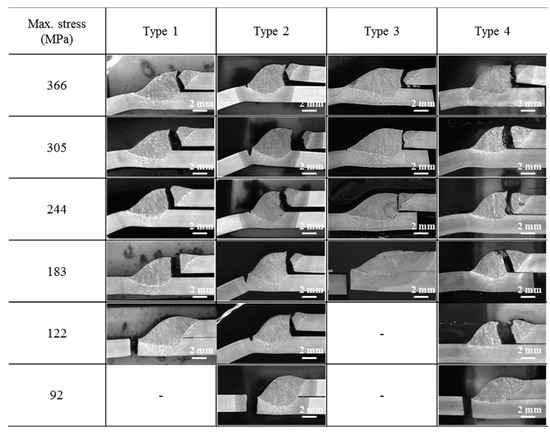 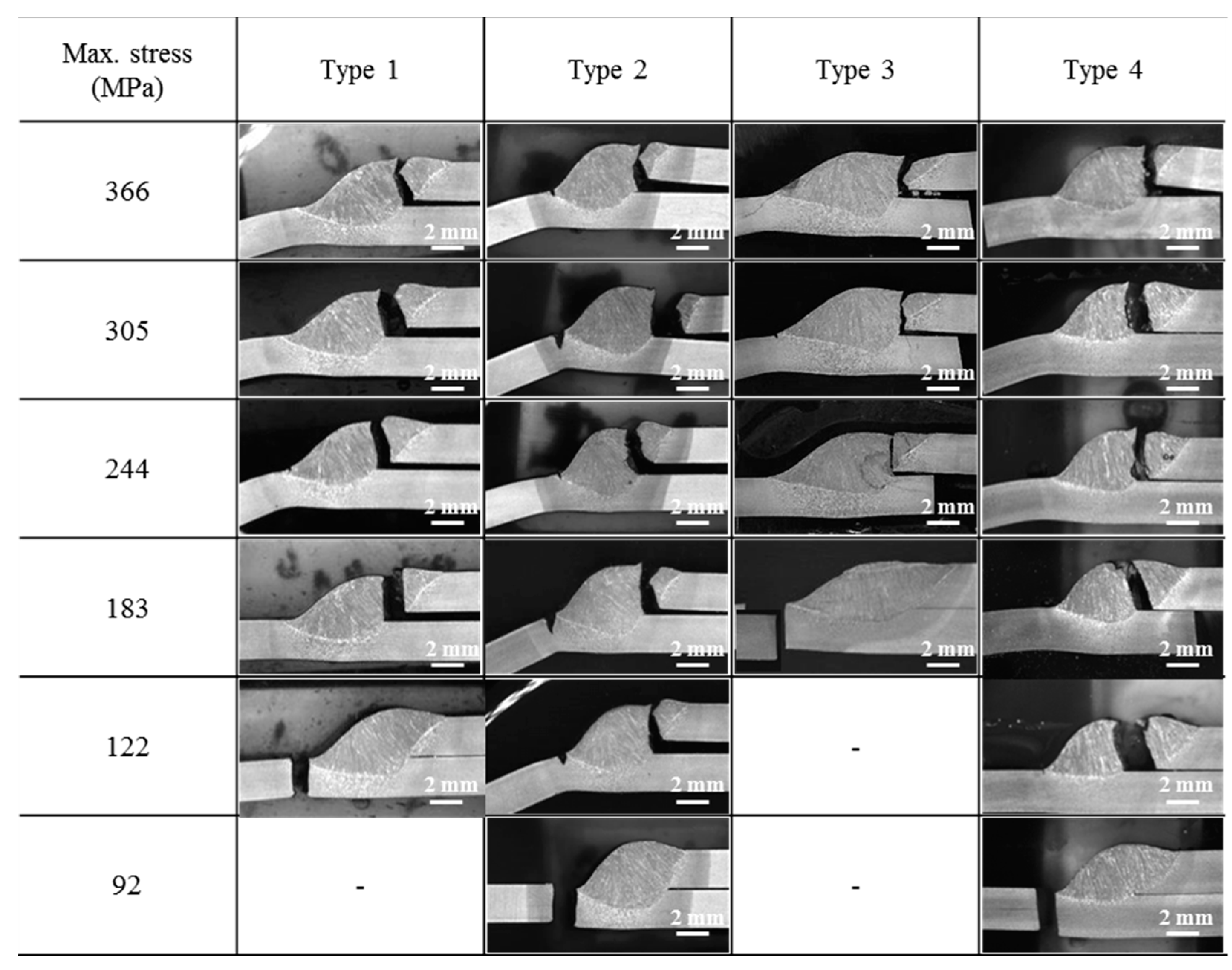 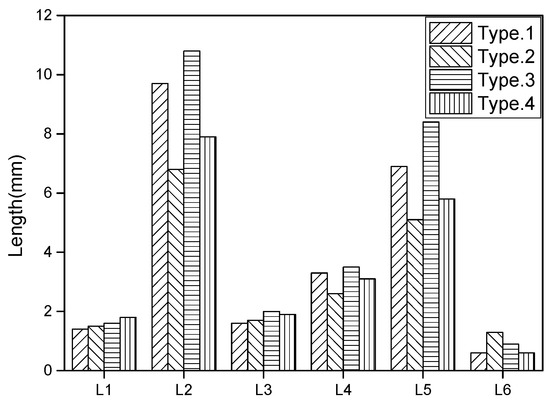 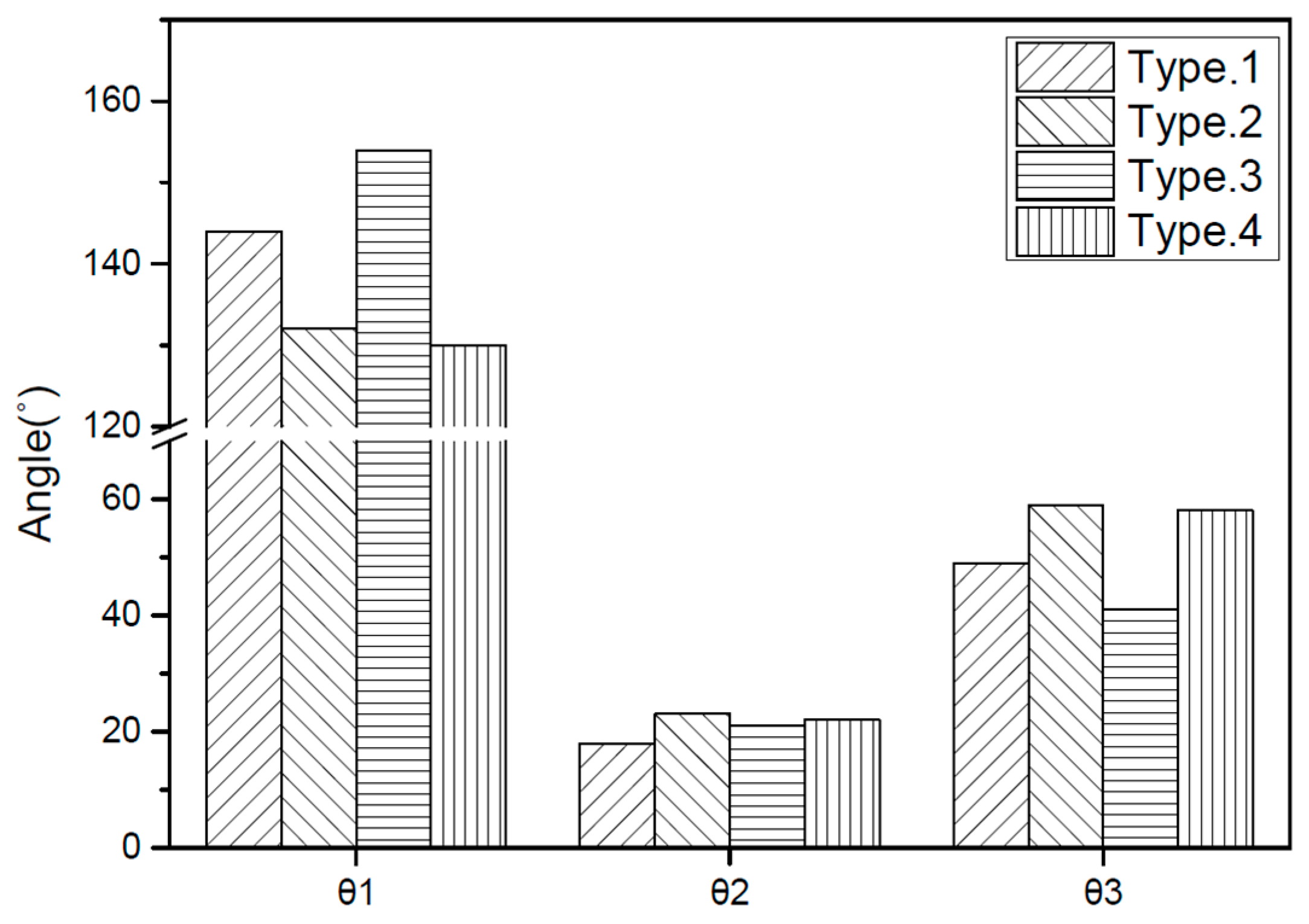