Effect of the Sputtering Power on the Structure, Morphology and Magnetic Properties of Fe Films

In this paper, the radio frequency (RF) magnetron sputtering (MS) method was utilized to fabricate multiple sets of the iron film samples under different sputtering powers. With the help of X-ray diffraction (XRD), scanning electron microscopy (SEM), atomic force microscopy (AFM) and vibrating sample magnetometer (VSM), how the sputtering power affected the structure, morphology and magnetic properties of the iron film was studied. XRD results showed that all Fe films have a polycrystalline bcc structure and (110) preferred orientation. According to the Bragg equation calculation, the larger the sputtering power, the larger the average grain size, which is consistent with the results of AFM particle size analysis. The main reason is that the sputtering power affects the grain growth mode. As the sputtering power increases, it gradually changes from a small island-like growth to a thick columnar growth. However, from the surface morphology and height profile, we saw that the iron film deposited under 230 W had the most uniform grain size distribution and the grain size was relatively small. This is why thin films deposited under this condition have the best soft magnetic properties. The saturation magnetization (Ms) reaches 1566 emu/cm3, coercivity (Hc) is 112 Oe, and squareness ratio (Mr/Ms) is 0.40. Therefore, iron film prepared under 230 W has good comprehensive properties (highest Ms, lower Hc and Mr/Ms) that provide an experimental basis for further thin film research work. View Full-Text
Keywords: Fe films; sputtering power; crystal structure; surface morphology; soft magnetic properties Fe films; sputtering power; crystal structure; surface morphology; soft magnetic properties
►▼ Show Figures 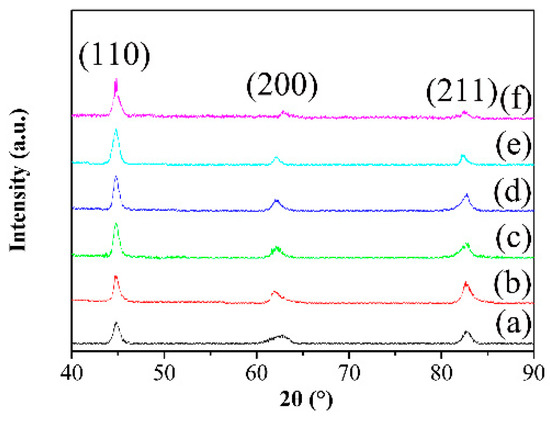