Ball burnishing is a superfinishing operation whose objective is the enhancement of surface integrity of previously machined surfaces, hence its appropriateness to complement chip removal processes at the end of a production line. As a complex process involving plastic deformation, friction and three-dimensional interaction between solids, numerical solutions and finite element models have typically included a considerable amount of simplifications that represent the process partially. The aim of this paper is to develop a 3D numerical finite element model of the ball burnishing process including in the target workpiece real surface integrity descriptors resulting from a ball-end milled AISI 1038 surface. Specifically, its periodical topological features are used to generate the surface geometry and the residual stress tensor measured on a real workpiece is embedded in the target surface. Secondly, different models varying the effect of the coefficient of friction and the direction of application of burnishing passes with regards to the original milling direction are calculated. Results show that the resulting topology and residual stresses are independent of the burnishing direction. However, it is evident that the model outputs are highly influenced by the value of the coefficient of friction. A value of 0.15 should be implemented in order to obtain representative results through finite element models. View Full-Text
Keywords: ball burnishing; FEM; residual stress; topology; steel ball burnishing; FEM; residual stress; topology; steel
►▼ Show Figures 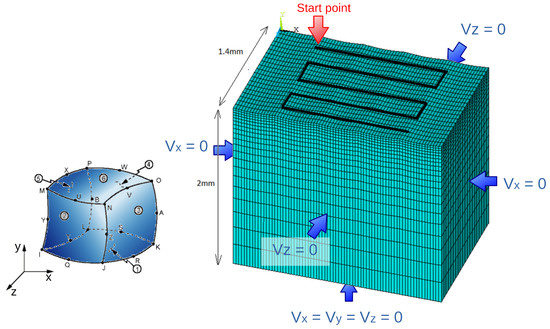