2.1. Workpiece Preparations and the FSDC Process

Medium carbon alloy steel ASTM A516-70, designated for use in low-to-medium pressure vessel processing equipment and boilers, was selected as the substrate to be cladded. The cladding material Al 5052-H32 is a mildly tempered, work-hardened aluminum alloy used in marine and seawater environments due to its enhanced corrosion-resistance properties [18,19]. The chemical compositions of the substrate and cladding materials are illustrated in Table 1. Rectangular specimens with dimensions, 200 mm × 55 mm were machined from 7-mm-thick substrate and 2-mm-thick cladding materials. The samples were then milled to ensure dimension uniformity, matching, and proper alignment. The mating surfaces of the specimens were ground using 400 grit size sandpaper to remove surface contaminations, oils, or adhesive oxide layers and thereafter cleaned with acetone before the FSDC processing. The details of the unidirectional FSDC processing utilized in this study have been fully described in an earlier work by the authors [4]. The FSDC tool (Figure 1) comprises of two parts: a tool shank containing the tool shoulder, made of 4140 alloyed steel, and a 1.9-mm-long adjustable cylindrical pin made from H13 tool steel. Concentric circular grooves were machined on the 23-mm-diameter tool shoulder (Figure 1b) to increase the surface contact area and enhance the frictional heat generation and material flow during the FSDC process. The FSDC tool shank and pin were heat-treated to a hardness between 54 and 56 HRC.
The FSDC process was performed on a fully instrumented research-based friction stir welder (RM-1, Manufacturing Technology Inc., South Bend, IN, USA). Tool rotation speed was varied from 250 to 1000 rpm and the traverse speed from 50 to 150 mm/min. The specimen designations are defined in Table 2. For example, FM-3 represents the FSDC cladded sample with a rotation speed of 500 rpm and a traverse speed of 150 mm/min. During the FSDC process, the tool plunging depth and tool title angle were kept constant at 2 mm and 0°, respectively. As shown in the last column of Table 2, only five (5) out of the nine (9) cladded samples passed the interfacial shear tensile tests [4].

The five selected cladded samples, were then sectioned and prepared for microstructural, microhardness, X-Ray diffraction (XRD), and corrosion resistance evaluation. The samples were extracted from the steady-state section from the middle of the cladded workpiece. Standard sample preparation for microstructural analyses was followed. Cladded samples were sectioned across the tool traverse motion and mounted using a cold molding technique to avoid any tempering/aging effect. The mounted samples were then grounded using SiC papers of 240 to 600 grit sizes. These samples were thereafter polished and etched. A two-step etching procedure was adopted for revealing the grains according to the technique proposed by Taheri [19]. The technique involved a pre-etching step whereby the samples were etched in a solution of 1 g of NaCl in 50 mL of 40% H3PO4 at an elevated temperature of 70 °C for a duration of approximately 5 min before etching in Weck’s solution consisting of 1 g of NaOH and 4 g of KMnO4 in 100 mL of H2O, for a similar duration.
Thereafter, the samples were examined under a digital optical microscope (DSX510 upright microscope, Olympus, Tokyo, Japan). The microhardness of the processed surface was then measured using a micro-indentation hardness tester (MicroCombi, CSM Instruments, Peseux, Switzerland), with an applied load of 500 mN, and 10 s dwell time. A multipurpose X-ray diffraction (XRD) apparatus (Ultima IV, Rigaku, Tokyo, Japan) was used to analyze the structural evolution of the cladded systems. The XRD samples were of the same thickness and were placed on the sample holder ensuring that they were aligned properly with the sample holder. The XRD was conducted to study if the process conditions resulted in phase variation, as well to estimate the average grain size using Scherrer’s formula as presented in Equation (1).
Average grain size = (0.9 × λ)/(FWHM × cosθ)
where 0.9 is the shape factor (spherical shape assumed), λ is the wavelength of the X-ray used (λCuKα = 0.154059 nm), FWHM is the full width at half maximum height, and θ is the Bragg’s angle.
Corrosion tests were conducted in a saline environment with 3.5 wt.% aerated aqueous sodium chloride (3.5% NaCl) solution as the electrolyte, where the processed surfaces of the cladded systems were covered with an electrochemical mask (GAMRY, Warminster, PA, USA) with a circular area of 1 cm2 to define a specific area for the analysis. All corrosion tests were conducted at room temperature using the typical Gamry flat cell. The electrochemical data were collected using a potentiostatic/galvanostatic instrument (Gamry 600, GAMRY, Warminster, PA, USA). The electrochemical cell used consisted of the cladded steel sample as the working electrode, a graphite rod as the counter electrode, and the saturated calomel electrode (SCE) was used as the reference electrode. The protective behavior against corrosion was studied by conducting electrochemical impedance spectroscopy (EIS) analysis with a frequency range between 100 kHz and 10 mHz. The number of points taken was 10/decade with an AC voltage of 10 mV. The effect of immersion durations of 1, 7, and 21 days was also investigated using the EIS technique. Data fitting and electrochemical simulations were carried out using the Echem Analyst software (Gamry, version 6.04) Potentiodynamic polarization (PDP) was performed after 21 days of continuous immersion in the saline medium. The potential was scanned from −0.25 V to 0.25 V with respect to the open circuit potential (OCP) at a potential sweep rate of 1 mVs−1. After the 21 days exposure duration and the corrosion (EIS and PDP) measurements, the exposed surfaces were characterized using scanning electron microscopy (SEM) coupled with energy dispersive spectroscopy (EDS). Both techniques were applied to study the corroded surface morphology and developed corrosion products on the processed surface and unprocessed cladded material.

A number of process variables were monitored during the FSDC process. These parameters included tool reaction forces, torque as well as plunging depth, tool location, and feed rate. The estimation of heat input can be calculated following ASME (BPVC) Section IX-Welding [20]. Equation (2) evaluates the heat input per unit length of the weld.
H = (P/v) = (T × w)/v
where H represents the heat input in J/mm, P power in watt, v is the traverse speed in mm/s, T is tool torque N.m, and ω is tool angular speed in rad/sec. In this equation, heat transfer efficiency is ignored, and 100% of the mechanical work is assumed to convert into heat. Note that heat generated due to tool advancing was also ignored. Table 3 presents the tool advance per revolution (APR), the average measured values of tool forging force and torque, while the heat input evolution is presented in Figure 2. It can be seen that the heat input for samples FM-2 and FL-1 is relatively close, but forging force is higher for sample FM-2. This explains the difference in joint strength as reported in Table 1. The full characterization of the aluminum-steel interfacial bonding has been reported in [4], it also discusses the formation of intermetallic layer at the joint between the clad material and the base. For sample FM-2, the average thickness of the intermetallic layer was around 4 µm, while for sample FL-1, the average thickness was around 2.5 µm [4].

After completing the corrosion tests, the corroded surfaces of the cladded samples, as well as unprocessed cladding material were examined using SEM, and the corrosion products were also analyzed using EDS analyses. The low magnification SEM images showing the exposed area to the medium are provided in Figure S4 (supplementary data). The ranks of the corrosion protection performance of all samples obtained from the EIS analysis, PDP, and visual inspection of the corroded surfaces were found to be in good agreement. Figure 11 presents the SEM images of the exposed areas. Besides the unprocessed Al (Figure 11a), significant accumulation of corrosion products can be observed on the samples with samples FL-1 (Figure 11c) and FM-3 (Figure 11f) exhibiting improved passivation behavior. Figure 12 presents the EDS results of the corroded sample FL-1. It can be inferred from the results that the corrosion products are possible mixtures of oxides of Al, Mg, or combination and NaCl deposits. The formation of the corrosion product can hinder further corrosion of the underlying metal when the formed oxides are well dispersed, compact, and firmly adherent oxides. This is indicated by the almost vertical anodic curve (better passive region stability) of sample FM-3 as well as sample FL-1 after being anodically polarized to higher potentials.

In this work, the effect of FSDC process parameters on the corrosion protection of cladded system AA 5052-H32/ASTM A516-70 was studied. Both EIS and PDP electrochemical techniques were used to study the corrosion resistance of the cladded system as compared to bare steel. In summary, the cladded system exhibited enhanced corrosion resistance in a 3.5% NaCl environment as compared to bare steel under all processing conditions. This indicates the great impact of process parameters on the corrosion protectiveness of the cladding system. Based on the experimental results, the following conclusions can be drawn:

This research was funded by King Fahd University of Petroleum and Minerals, grant number IN161049.

The authors declare no conflict of interest. The funders had no role in the design of the study, in the collection, analyses, or interpretation of data, in the writing of the manuscript, or in the decision to publish the results. 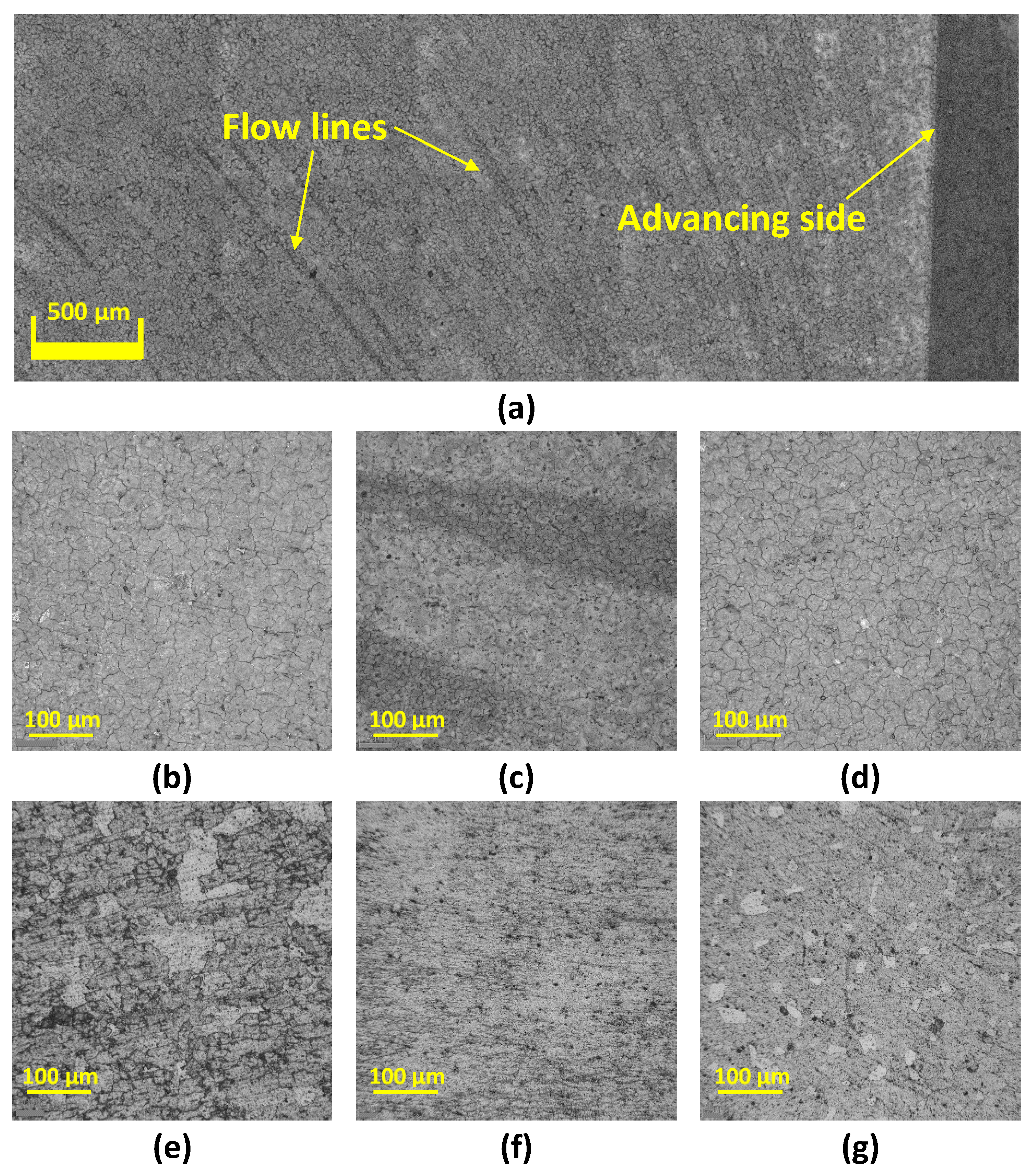 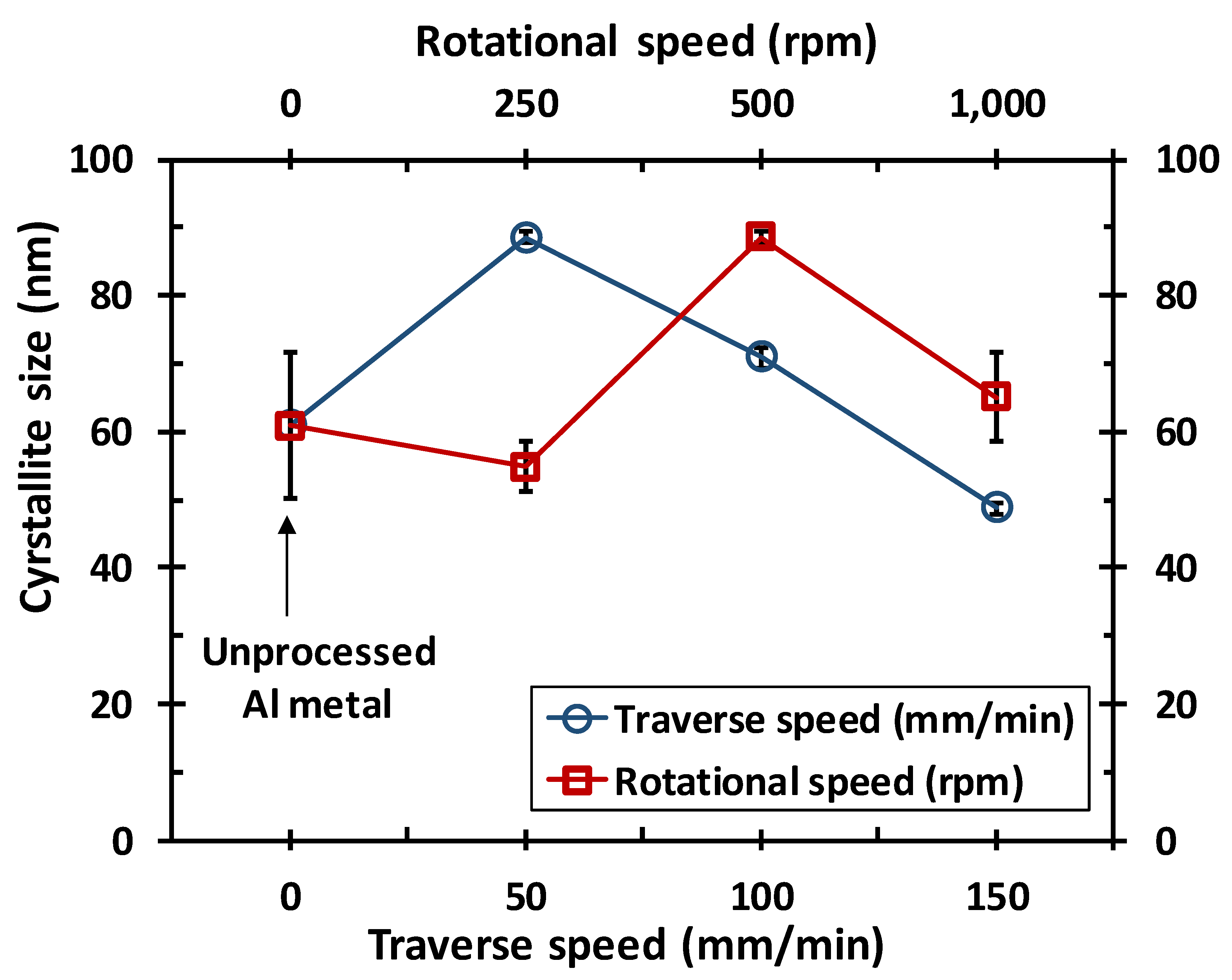 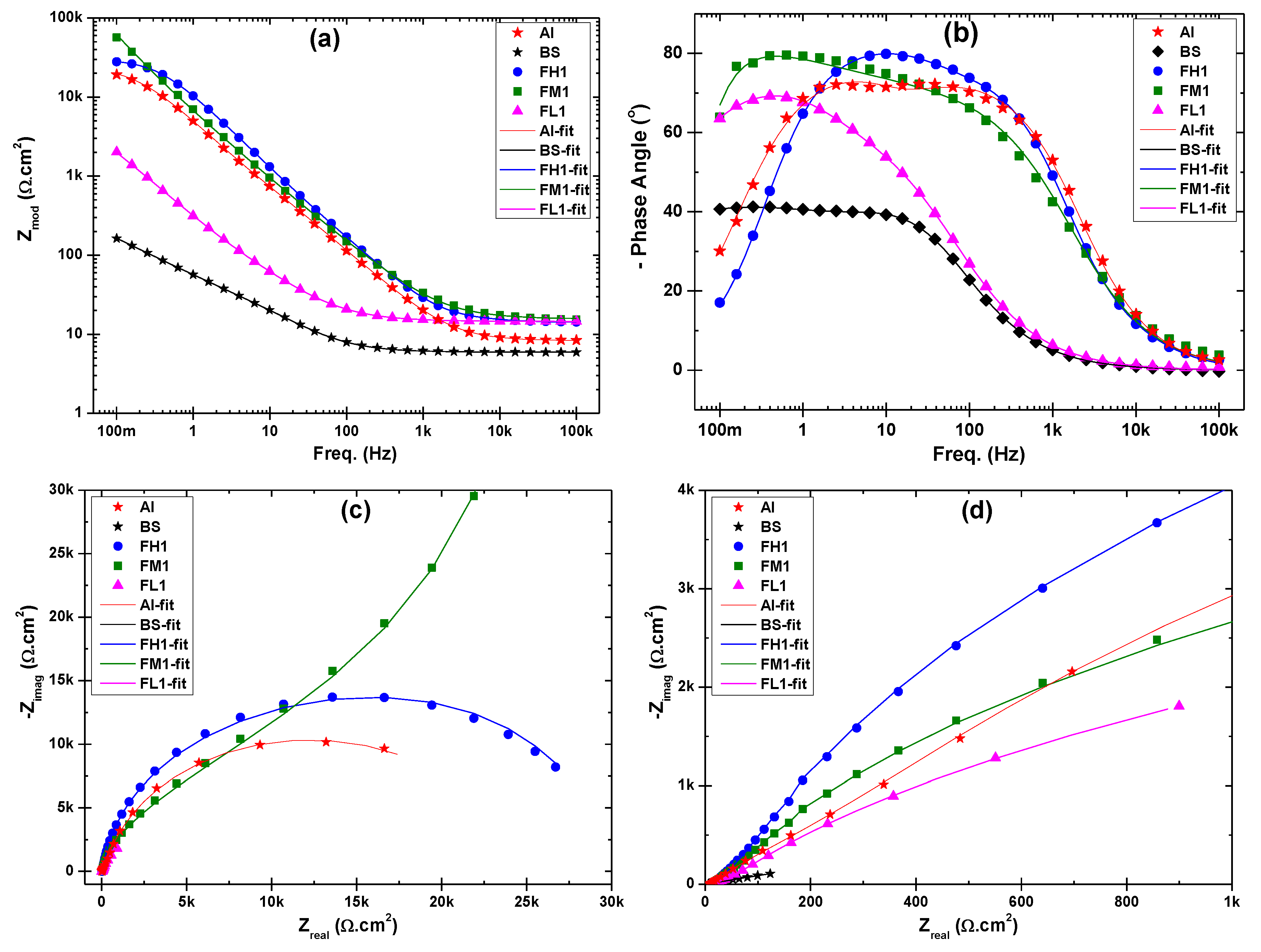 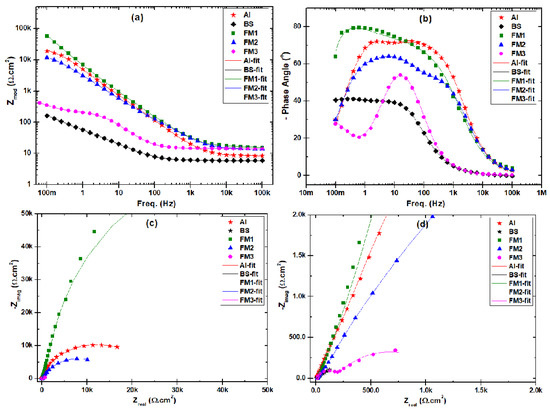 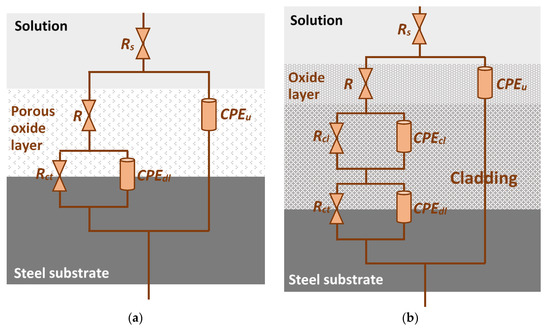 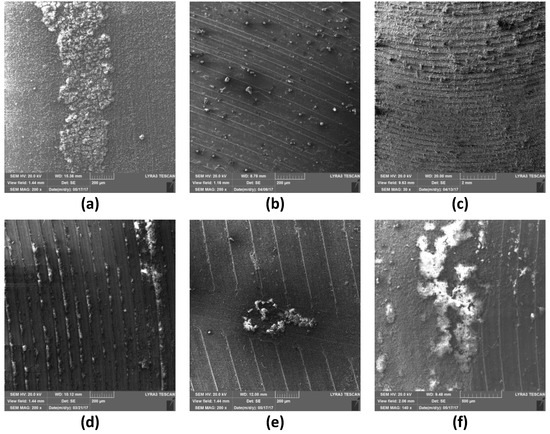 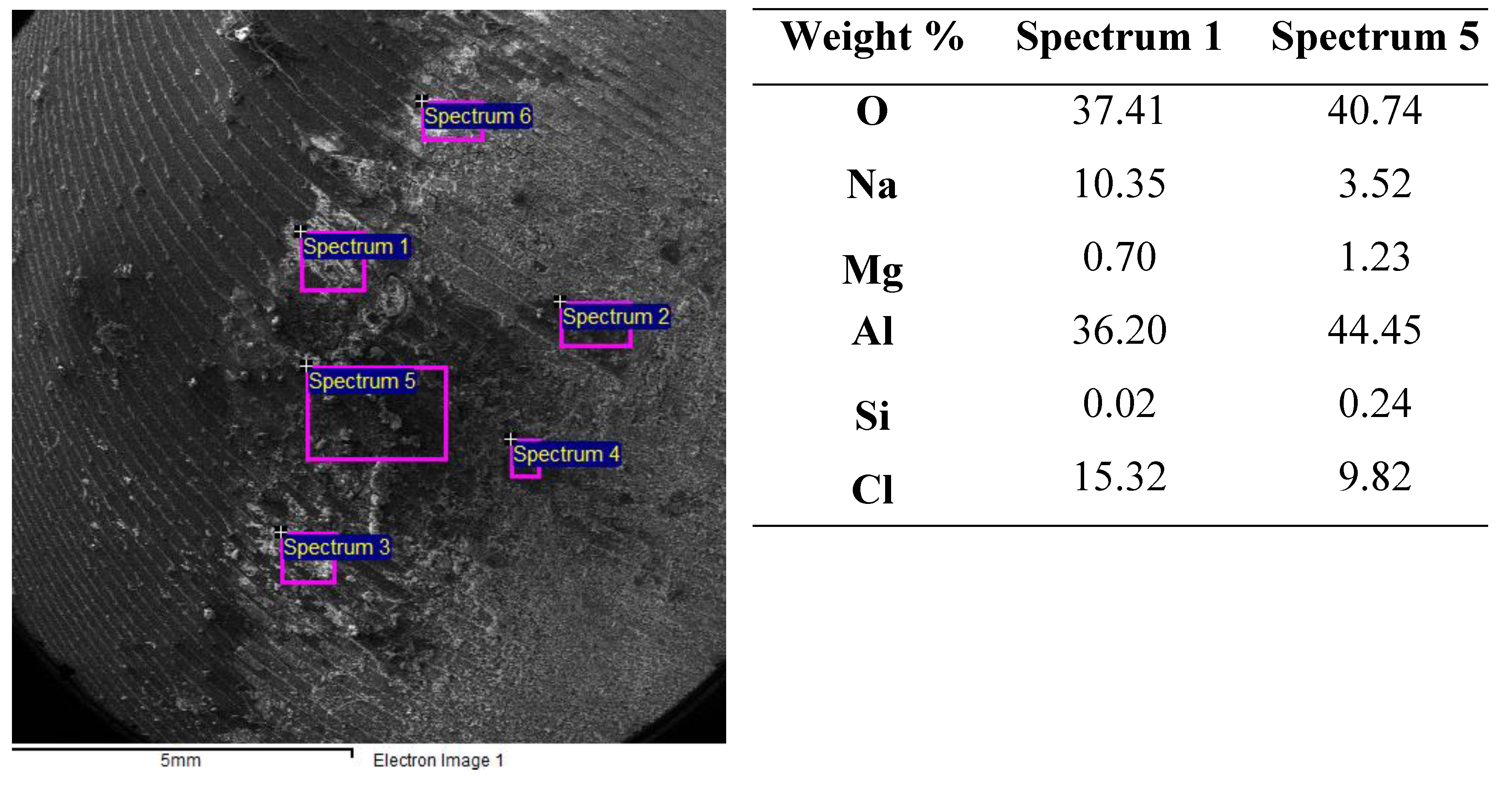