The hot deformation of 18Cr-5Ni-4Cu nitrogen-alloyed austenitic stainless steel was tested with a Gleeble-1500D simulator in the temperature range of 1273–1473 K and in the strain rate range of 0.01–10 s−1. The Zener-Hollomon parameter method was used to construct a constitutive equation for high-temperature plastic deformation. The energy dissipation diagram of the material was calculated based on dynamic material modelling (DMM). The microstructural variations were characterized via X-ray diffraction (XRD), field emission scanning electron microscopy (FESEM) with energy dispersive spectroscopy (EDS) and transmission electron microscopy (TEM). The thermodynamic calculation results showed that the addition of nitrogen to 18Cr-5Ni-4Cu steel promoted the formation of Cr2N and gas phases and expanded the austenite phase region; these results were consistent with the XRD test results of the solid solution sample. The hot deformation activation energy after nitrogen addition was 556.46 kJ∙mol−1. The processing map predicted that the optimum hot working regimes were in the temperature range of 1416–1461 K, where was 0.75–1 on the power dissipation map. At high temperatures and a small strain rate, dynamic recrystallization easily occurred. The TEM analyses showed that nano-scale M23C6 and Cr2N precipitated at the grain boundary, and NbC with a diameter of approximately 150 nm appeared along the grain boundary, resulting in grain boundary strengthening. The phase precipitation results were consistent with the Thermo-Calc calculation results. The nitrogen solid solution in the steel promoted the precipitation of nitrides, which caused grain boundary strengthening. Thus, the grain boundary stress increased and wedge-shaped grain boundary cracks formed. View Full-Text
Keywords: constitutive equation; precipitation; dynamic recrystallization; flow curve; hot deformation constitutive equation; precipitation; dynamic recrystallization; flow curve; hot deformation
►▼ Show Figures 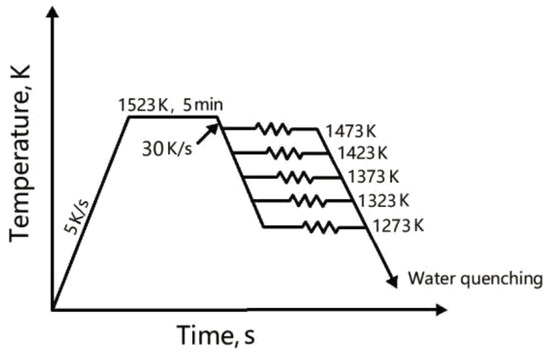