The Effects of Loaded Plyometric Exercise during Warm-Up on Subsequent Sprint Performance in Collegiate Track Athletes: A Randomized Trial

The Relationship between CrossFit® Performance and Laboratory-Based Measurements of Fitness

To date, research has examined the physiological determinants of performance in standardized CrossFit® (CF) workouts but not without the influence of CF familiarity. Therefore, the purpose of this present study was to examine the predictive value of aerobic fitness, body composition, and total body strength on performance of two standardized CF workouts in CF-naïve participants. Twenty-two recreationally trained individuals (males = 13, females = 9) underwent assessments of peak oxygen consumption (VO2 peak), ventilatory thresholds, body composition, and one repetition maximum tests for the back squat, deadlift, and overhead press in which the sum equaled the CF Total. Participants also performed two CF workouts: a scaled version of the CF Open workout 19.1 and a modified version of the CF Benchmark workout Fran to determine scores based on total repetitions completed and time-to-completion, respectively. Simple Pearson’s r correlations were used to determine the relationships between CF performance variables (19.1 and modified Fran) and the independent variables. A forward stepwise multiple linear regression analysis was performed and significant variables that survived the regression analysis were used to create a predictive model of CF performance. Absolute VO2 peak was a significant predictor of 19.1 performance, explaining 39% of its variance (adjusted R2 = 0.39, p = 0.002). For modified Fran, CF Total was a significant predictor and explained 33% of the variance in performance (adjusted R2 = 0.33, p = 0.005). These results suggest, without any influence of CF familiarity or experience, that performance in these two CF workouts could be predicted by distinct laboratory-based measurements of fitness. View Full-Text
Keywords: high-intensity functional training; aerobic fitness; body composition high-intensity functional training; aerobic fitness; body composition
►▼ Show Figures 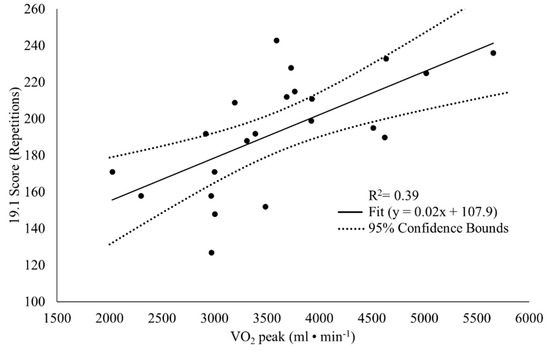