The load-depended loss of vertical barbell velocity at the end of the acceleration phase limits the maximum weight that can be lifted. Thus, the purpose of this study was to analyze how increased barbell loads affect the vertical barbell velocity in the sub-phases of the acceleration phase during the snatch. It was hypothesized that the load-dependent velocity loss at the end of the acceleration phase is primarily associated with a velocity loss during the 1st pull. For this purpose, 14 male elite weightlifters lifted seven load-stages from 70–100% of their personal best in the snatch. The load–velocity relationship was calculated using linear regression analysis to determine the velocity loss at 1st pull, transition, and 2nd pull. A group mean data contrast analysis revealed the highest load-dependent velocity loss for the 1st pull (t = 1.85, p = 0.044, g = 0.49 [−0.05, 1.04]) which confirmed our study hypothesis. In contrast to the group mean data, the individual athlete showed a unique response to increased loads during the acceleration sub-phases of the snatch. With the proposed method, individualized training recommendations on exercise selection and loading schemes can be derived to specifically improve the sub-phases of the snatch acceleration phase. Furthermore, the results highlight the importance of single-subject assessment when working with elite athletes in Olympic weightlifting. View Full-Text
Keywords: biomechanics; barbell velocity; performance; training; load–velocity relationship biomechanics; barbell velocity; performance; training; load–velocity relationship
►▼ Show Figures 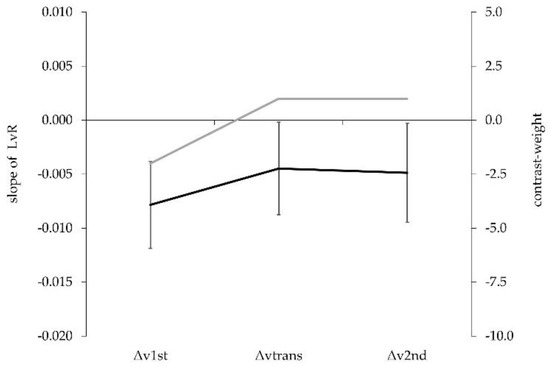 Sandau, I.; Granacher, U. Effects of the Barbell Load on the Acceleration Phase during the Snatch in Elite Olympic Weightlifting. Sports 2020, 8, 59.


Sandau I, Granacher U. Effects of the Barbell Load on the Acceleration Phase during the Snatch in Elite Olympic Weightlifting. Sports. 2020; 8(5):59.


Sandau, Ingo; Granacher, Urs. 2020. "Effects of the Barbell Load on the Acceleration Phase during the Snatch in Elite Olympic Weightlifting." Sports 8, no. 5: 59.