Background: The aim of this study was to investigate the effect of descent velocity during two-legged full back squats upon muscle activation and squat ascent performance. Methods: Eleven healthy resistance-training males (age: 24 ± 6 years, body mass: 89.5 ± 21.5 kg, height: 1.84 ± 0.10 m) performed 4-repetition maximum (4-RM) two-legged full squats with slow, normal, and fast descent phases. Kinematics and muscle activity of ten muscles divided into five regions were measured. Results: The main findings were that maximal and minimal velocity were lower and maximal velocity occurred later in the slow condition, while there was no difference in second peak velocity or ascent displacement when compared with the normal and fast conditions. Furthermore, no differences in muscle activation were found as an effect of the descent velocity. Conclusion: It was concluded that the slow descent velocity had a negative effect upon the ascent phase, because of the lower peak velocity and peak force increasing the chance of failure. The lower velocities were not caused by lower pre-activation of the muscles but were probably a result of potentiation and/or utilization of stored elastic energy and/or the stretch reflex. View Full-Text
Keywords: sticking point; sticking region; EMG sticking point; sticking region; EMG
►▼ Show Figures 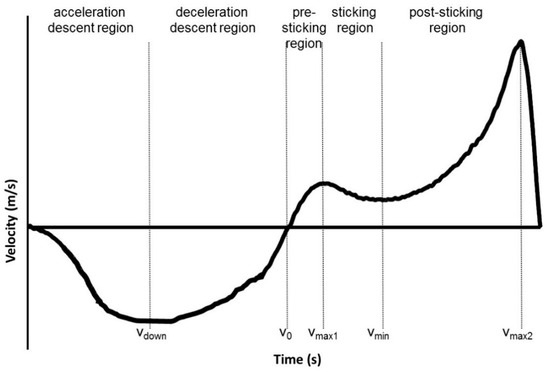