The aim of this study is to clarify the effects of 3-week work-matched high-intensity intermittent cycling training (HIICT) with different cadences on the VO2max of university athletes. Eighteen university athletes performed HIICT with either 60 rpm (n = 9) or 120 rpm (n = 9). The HIICT consisted of eight sets of 20 s exercise with a 10 s passive rest between each set. The initial training intensity was set at 135% of VO2max and was decreased by 5% every two sets. Athletes in both groups performed nine sessions of HIICT during a 3-week period. The total workload and achievement rate of the workload calculated before experiments in each group were used for analysis. VO2max was measured pre- and post-training. After 3 weeks of training, no significant differences in the total workload and the achievement rate of the workload were found between the two groups. VO2max similarly increased in both groups from pre- to post-training (p = 0.016), with no significant differences between the groups (p = 0.680). These results suggest that cadence during HIICT is not a training variable affecting the effect of VO2max. View Full-Text
Keywords: aerobic capacity; graded-exercise test; total workload aerobic capacity; graded-exercise test; total workload
►▼ Show Figures 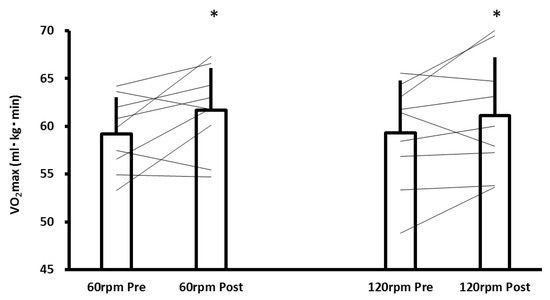