The Effect of a Curved Non-Motorized Treadmill on Running Gait Length, Imbalance and Stride Angle

:
Running on a non-motorized, curved-deck treadmill is thought to improve gait mechanics. It is not known, though, whether the change in gait carries over to running on a motorized treadmill on level ground. To determine the effect of running on a curved non-motorized treadmill (CNT) on gait characteristics, measured during a subsequent bout of running on a traditional motorized treadmill (TMT), sixteen healthy college-aged participants, aged (mean ± SD) 20.4 ± 1.6 years, volunteered to have their gait analyzed while running on a TMT and CNT. After familiarization with, and a warm-up on, both treadmills, each subject completed five 4-min bouts of running, alternating between traditional motorized and curved non-motorized treadmills: TMT-1, CNT-1, TMT-2, CNT-2, and TMT-3. Variables of interest included step length (m), stride length (m), imbalance score (%), and stride angle (°), and were measured using Optogait gait analysis equipment. We found differences in gait characteristics among TMT-1, TMT-2, and TMT-3, which can be attributed to running on the CNT. The results show that running on a CNT resulted in significant changes in gait characteristics (step length, stride length, imbalance score and stride angle). These findings suggest that running on a CNT can significantly influence running gait.
Keywords:
treadmill; curved; running gait; imbalance; stride angle; stride length; step length

Running has remained a popular exercise for decades all over the world. In the United States of America alone, it is estimated that over 16 million people finish running races annually [1]. According to some experts, long-distance running was crucial in creating our current upright body form [2]. Humans are one of the few species who have mastered bipedal locomotion, and their foot has evolved to be the basis for such a specialized gait [3]. The human foot alone comprises 26 bones, 33 joints and 19 muscles [3,4]. The bones are arranged to form a medial longitudinal arch, which makes it ideal for its function of supporting the weight of the body and spreading the forces experienced during gait [3,5]. As mentioned by Altman and Davis [6], analysis of rear foot striking (RFS) in a barefoot condition landing with RFS results in a very defined impact peak in the vertical ground reaction force during contact, which precedes the propulsion peak. This results in high loading rates in early stance. However, forefoot strikers are able to eliminate this impact through eccentric loading of the posterior calf musculature, which significantly reduces this loading. Midfoot striking results in more variable loading, but load rates typically fall between the rear foot and forefoot strike pattern. It has been suggested that the anatomy and small surface area of the heel is suited for the loads in walking, but not for attenuating the repeated impacts associated with running [6,7]. Even with the running shoe evolution, approximately 75% of shod runners experience heel strike [6]. Interestingly, a similar percentage of runners report injuries associated with running (up to 79% [7]). Forefoot striking while running takes greater advantage of the energy-storing capacity of the arches, which is evidenced by the increased vertical arch motion during load acceptance [6,8].
Humans began using treadmills as a mode of aerobic exercise in the 1960s. Since that time, treadmills have grown in popularity and sophistication. Treadmills allow users to walk, jog, and even run at a variety of speeds. As technology improved, designers began creating treadmills with the capacity to simulate walking or running up or down a hill by manipulating the incline. These improvements in the technology have led to the modern treadmill, which allows users to pick a predesigned workout program. These designed programs increase/decrease speed and incline at specified times throughout the exercise routine. Due to treadmill versatility, they have become one of the most widely used pieces of aerobic exercise equipment [9]. Motorized and non-motorized treadmills allow participants the convenience of training aerobically on a machine while staying in one place. Non-motorized treadmills have no motor and rely on the user’s energy to move the belt [9,10]. Due to total manual operation, participants can instantly adjust their pace with a few explosive steps. One evolution of the non-motorized treadmill has been a curved platform forming a curved non-motorized treadmill (CNT). Manufactures believe that the arced design inspires the user to run with a more mechanically efficient gait. If this is an accurate belief, certain aspects of a runner’s gait, such as foot strike pattern, stride length, stride angle and imbalance, may be retrained without advanced and costly laboratory equipment.
There has been much preoccupation with foot strike pattern and associated biomechanical variables on running economy [11,12,13]. Mechanical factors can be divided into forces (kinetics) and movement patterns (kinematics). A runner exhibiting abnormalities in either of these areas can experience excessive loading on their musculoskeletal system [1]. Runners experiencing both excessive forces and abnormal movement patterns (gait) are likely to have an even greater risk of injury [14]. There are numerous components to gait, some of which include step length, stride length, imbalance or asymmetry and stride angle. A more compact step length and stride length are associated with a more efficient transfer of energy during running. A more symmetric running pattern indicates a more balanced application of force and therefore a more efficient effort. Stride angle correlates directly with running economy. Each of these variables is modifiable through feedback. The idea of altering gait patterns using feedback is not novel. The earliest forms of feedback were limb load monitors placed within the shoe of a patient [15,16,17,18]. The aim of this type of feedback was to produce an equal load distribution between the lower extremities during gait. Traditional gait retraining efforts occur on a motorized treadmill. When considering previous gait retraining research, and the belief that a curved non-motorized treadmill can stimulate a shift in running gait, it is logical that, if an athlete runs on a curved non-motorized treadmill, their gait pattern will change. Therefore, the purpose of this study was to determine if running on a curved non-motorized treadmill influences running gait.

Based upon an a priori power analysis, with α = 0.05 and β = 0.20, 16 volunteer participants were used in this research. Male and female recreationally trained athletes, between the ages of 18 and 60 years old, were solicited through advertisements. The participants had to be free of injury and capable of running for the required time period, as designated in the study guidelines (20 min). Prior to inclusion, all subjects provided informed consent according to the institutional review board of the University of South Carolina (Pro00060177).

The variables of interest for this research included step length, stride length, imbalance and stride angle.

The Optogait photoelectric cell system (Microgate, Bolzano, Italy) was used to measure gait variables (step length, stride length and stride angle). The Optogait system consists of two rigid parallel bars (a transmitter unit and a receiver). The bars were placed on either side of the traditional motorized treadmill, approximately 70 cm apart and parallel to each other. The rigid nature of the bars did not afford the opportunity to place them on the arced non-motorized treadmill. The Optogait system was connected (via USB) to a personal computer (Lenovo, model T 530, Lenovo, Morrisville, NC, USA). Optogait software (software version V1.10.7.0, Microgate, Bolzano, Italy) was used for quantification of all gait measurements. This system has been determined to be a valid instrument in the measurement of gait parameters [19].
Imbalance was measured using a Gyko inertial measurement tool. The Gyko inertial sensor system (Microgate, Bolzano, Italy) contains a three-dimensional accelerometer, gyroscope, and magnetometer which allows for recordings (full scale range: 8 g) at a sampling frequency of 500 Hz. The Gyko system was perpendicularly attached to an elastic belt, provided with the system. The Gyko system was fixed at the mid-scapular level on the back of the body (between the shoulder blades), as indicated by the manufacturer (http://www.gyko.it/en). During assessment, accelerometer and gyroscope signals were transferred via bluetooth to a personal computer and stored using the proprietary software (GykoRePower Software, Microgate, Bolzano, Italy). The Gyko accelerometer has been determined to be a valid instrument for the measurement of imbalance [20].
Treadmills used in this research effort included a traditional motorized treadmill and an arced non-motorized treadmill. The traditional motorized treadmill used in this research was a GE 2000 Series clinical grade treadmill set at a grade of 0 degrees. The arced non-motorized treadmill used in this research was a TrueForm Runner Enduro model (True Form Runner, Chester, CT, USA).

Statistical analyses were conducted using the Statistical Package for the Social Sciences (SPSS) (Version 24, IBM Corp, Armonk, NY, USA). Normal distribution of the data was confirmed through a Shapiro–Wilks test and visual inspection of box plots, normal Q-Q plots, and frequency histograms. Descriptive statistics, including mean value and standard deviation (mean ± SD), were calculated for the physical characteristics and performance variables (Step Length, Stride Length, Imbalance and Stride Angle). Paired sample t-tests were conducted to determine if there were statistically significant differences between bouts of running as compared with baseline measures (TMT-1/TMT-2 and TMT-1/TMT-3). All calculations were performed with an a priori level of significance of p ≤ 0.05.

The authors would like to thank the study participants and TrueForm Runner for their generosity, time and knowledge. 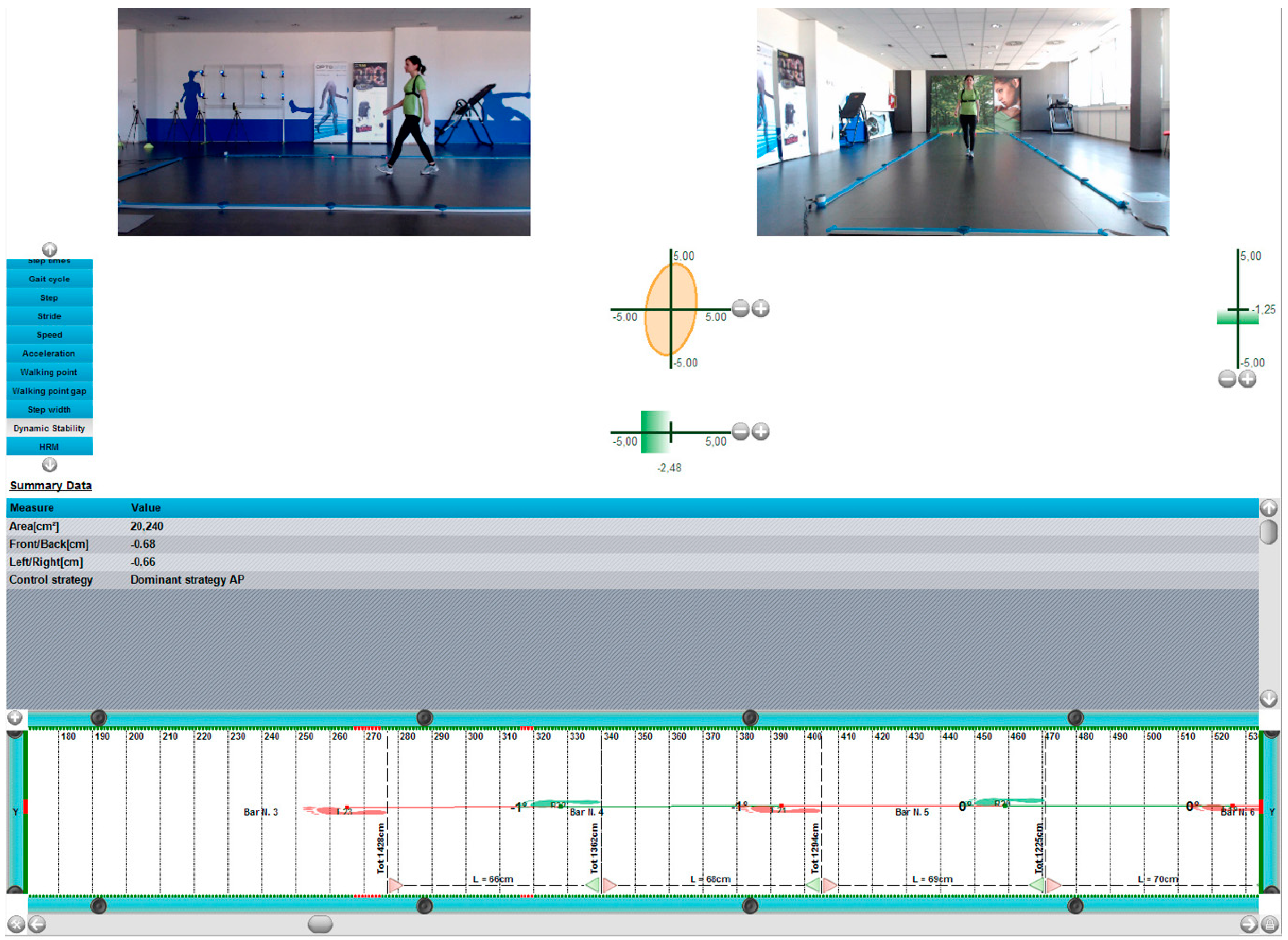