Bed bugs have reemerged recently as a serious and growing problem not only in North America but in many parts of the world. These insects have become the most challenging pest to control in urban environments. Residual insecticides are the most common methods used for bed bug control; however, insecticide resistance limits the efficacy of treatments. Desiccant dusts have emerged as a good option to provide a better residual effect for bed bug control. Several studies have focused on determining the efficacy of dust-based insecticides against bed bugs. However, behavioral responses of bed bugs to insecticide dusts could influence their efficacy. The behavioral responses of bed bugs to six insecticide dusts commonly used in the United States were evaluated with an advanced video tracking technique (Ethovision). Bed bugs took longer to make first contact with areas treated with the diatomaceous earth (DE)-based products MotherEarth D and Alpine than pyrethroid, pyrethrins or silica gel based products, DeltaDust, Tempo 1% Dust and CimeXa, respectively. Lower visitation rates of bed bugs were recorded for areas treated with MotherEarth D, Alpine and CimeXa than that of DeltaDust, Tempo 1% Dust, and Tri-Die Silica + Pyrethrum Dust. Bed bugs spent less time in areas treated with Tri-Die Dust, CimeXa, Alpine, and MotherEarth D than DeltaDust and Tempo 1% Dust, and they exhibited a reduction in locomotor parameters when crawling on areas treated with CimeXa and Alpine. The implications of these responses to bed bug control are discussed.
Keywords: Cimex lectularius; insecticide dust; diatomaceous earth; behavioral responses; avoidance; video recording Cimex lectularius; insecticide dust; diatomaceous earth; behavioral responses; avoidance; video recording

Bed bugs have emerged as a serious pest of worldwide concern [1,2]. Bed bug infestations pose significant social, economic, and public health burdens [3,4,5]. These insects are difficult to control due to their nocturnal habits and cryptic behavior, a limited number of available active ingredients for control, and the low efficacy of residual insecticides [6,7]. Although integrated pest management (IPM) approaches that incorporate chemical and nonchemical methods have been proposed as an effective bed bug management [8,9,10], insecticide treatments continue to be the most common tool for bed bug control among pest management professionals [1,11]. Insecticide sprays are often applied extensively to bed bug aggregations or potential hiding places [12]; however, efficacy of insecticides is hampered by the development of insecticide resistance among bed bug populations [13,14,15,16]. Desiccant dusts have a long history of being used for pest management [17]. Silicon dioxide-based desiccants (e.g., diatomaceous earth [DE] and silica gel) are popular dusts because of their low mammalian toxicity and long residual insecticidal effects on crawling insects [17]. Diatomaceous earth and silica gel insecticide dusts work primarily by damaging the waxy cuticle of the insect through sorption or abrasion that can result in desiccation and death [18,19]. Insecticide dusts are typically applied to areas such as behind outlets and switch plates, beneath baseboards and carpet edges, or along inner frameworks of couches and box springs [12]. Insecticide dusts have also been used as perimeter treatments around beds and other furniture, along baseboards, and in voids [20]. They are considered a low-cost, long-term residual treatment option for low-income, multiunit housing buildings [20,21].
Adult and nymph bed bugs feed on the blood of humans and other vertebrates for brief time periods. When not feeding, bed bugs spend their time in concealed aggregation areas usually in close proximity to hosts [6]. Bed bugs are usually found assembled along mattress and box spring seams, as well as inside cracks, crevices, edges of furniture, baseboards, electric outlets, and other similar locations [22]. Because bed bugs do not reside on living hosts, they repeatedly need to leave their harborages to seek out their host for a blood meal [23]. It is during this time that, while searching for a blood meal or returning to their harborages, insects might come in contact with insecticide residues.
Insecticides can influence insect behavior by disrupting the normal function of its sensory or central nervous system [24]. For example, bed bugs avoid resting in areas with pyrethroid residues, which could reduce their exposure to insecticides [25]. Insecticides also affect several aspects of bed bug biology, including locomotion, feeding, mating, oviposition, fecundity, and development [25,26,27,28]. These sublethal effects could have detrimental consequences on bed bug populations over time. Studying behavioral responses of bed bugs to insecticides will ultimately provide a better understanding of the overall impact of insecticide treatment in bed bug management programs [25]. Although insecticide dusts have been perceived as a good option for bed bug control [29,30,31], data from previous studies on other insects indicate that some dusts might have repellent effects [32,33,34]. These effects could decrease the efficacy of insecticide dusts against bed bugs. In this study, we aim to quantify the behavioral responses of bed bugs to six common insecticide dust products with a modern video tracking technique. We discuss the impact of avoidance responses on bed bug control practices.

Adult bed bugs were obtained from a colony maintained at 25 °C, 50 ± 5% relative humidity, and a photoperiod of 12 h:12 h (light:dark). This colony was originally established from bed bugs collected in 2008 from an apartment in Jersey City, NJ, USA. This population was determined to be resistant to deltamethrin, following a method proposed by Romero et al. [13] (discriminating doses of 0.13 mg/cm2 technical grade deltamethrin; 0% mortality in 20 third to fifth instar nymphs). In the laboratory, the insects were fed defibrinated rabbit blood (Quad Five, Ryegate, MT, USA), heated to 37 °C with a circulating water bath, through a Parafilm-membrane feeder [35]. Evaluations began 8 to 10 days after adult emergence; the insects had been fed as adults three days before the initiation of the experiment.

Behavioral responses were tested in seven hexagon arenas (six treated with dust and one control) placed in a honeycomb pattern. This pattern was selected to accommodate for the limited viewing field of the camera used (Figure 1). The hexagons (length of sides = 5.4 cm, total area = 62.2 cm2) were made of plywood and were never reused. Placed on top of each hexagon was a ring made from a petri dish plate (diameter = 9 cm) to restrain the bugs in the arena. The internal ring walls were coated with fluoropolymer resin to prevent insects from climbing and escaping. Each arena was then divided in half, with one half being the treated zone and one being the untreated zone. The control arena was also divided in half, in which one half was randomly selected to gather activity variables so that comparisons with the other six treated arenas could be made. To determine the orientation of the split, a cardinal point system was used for north, east, south and west, and positions were randomized in each replicate. The amount of dust required to treat each half of the hexagons was calculated based on the label rate. The mean weights (± SE) of the products applied were 0.447 ± 0.007, 0.704 ± 0.008, 0.534 ± 0.007, 0.526 ± 0.005, 1.026 ± 0.009, and 1.566 ± 0.009 mg/cm2 for DeltaDust, Tempo 1% Dust, Tri-Die Dust, CimeXa, Alpine, and MotherEarth D, respectively.
Dust was distributed evenly on the plywood surfaces with a painting brush. A piece of plexiglass, fitted to the petri dish arena, was placed along the midline during application to prevent contamination of the untreated half. The hexagons were shifted in a counterclockwise manner between each replicate, with the center hexagon moving to the lower right space, the bottom hexagon moving into the center space, and the remaining hexagons moving respectively counterclockwise. Individual bed bugs were acclimated to the environment by restricting them in a piece of plastic tubing which was placed in the untreated area for 5 min. Insects were released by lifting up the tubing in each arena. Approximate simultaneous release was achieved by pinning fishing line to each of the plastic tubes and pulling them all up at the same time. In total, 20 replicates (10 males and 10 females) were used along with a common control group for each. Bioassays were conducted under ambient temperature (25 ± 2 °C) and relative humidity (40 ± 10%) during the first three hours into the scotophase, a time in which bed bugs display enhanced locomotor activity [36].

Groups of 10 bed bugs (three replicates) were forcibly exposed to the dusts for, approximately, the average time the insects spent crawling on each dust, calculated from the 5-min period bioassays described in the behavioral study: 15 s, 1 min 9 s, 1 min 14 s, 1 min 31 s, 2 min 8 s, 2 min 12 s, for DE, Alpine, CimeXa, Tri-Die Dust, Tempo, DeltaDust, respectively. Bed bugs were confined to treated halves of hexagons with the same dimensions used in the behavioral assays. Confinement to treated areas was achieved by fitting a piece of plexiglass into the arena along the center line. Bed bugs were removed from treated areas after each exposure time and placed in clean areas to record mortality at Day 4.

This study demonstrates that bed bugs have behavioral mechanisms that reduce their exposure to some insecticide dusts. These responses might affect the efficacy of bed bug management programs where insecticide dusts are included as a tactic. Nevertheless, the rapid killing effect of some dust insecticides upon brief contact might reduce the impact of avoidance in bed bugs. The study of bed bug responses to insecticide dusts provides not only a better understanding of the effect of dust treatments, but also inspires the development of behavior manipulation strategies that could lead to improved methods for bed bug control.

We thank Brittny N. Blakely and John P. Tuton for technical assistance during this study. 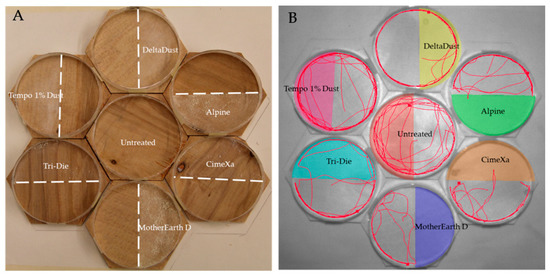 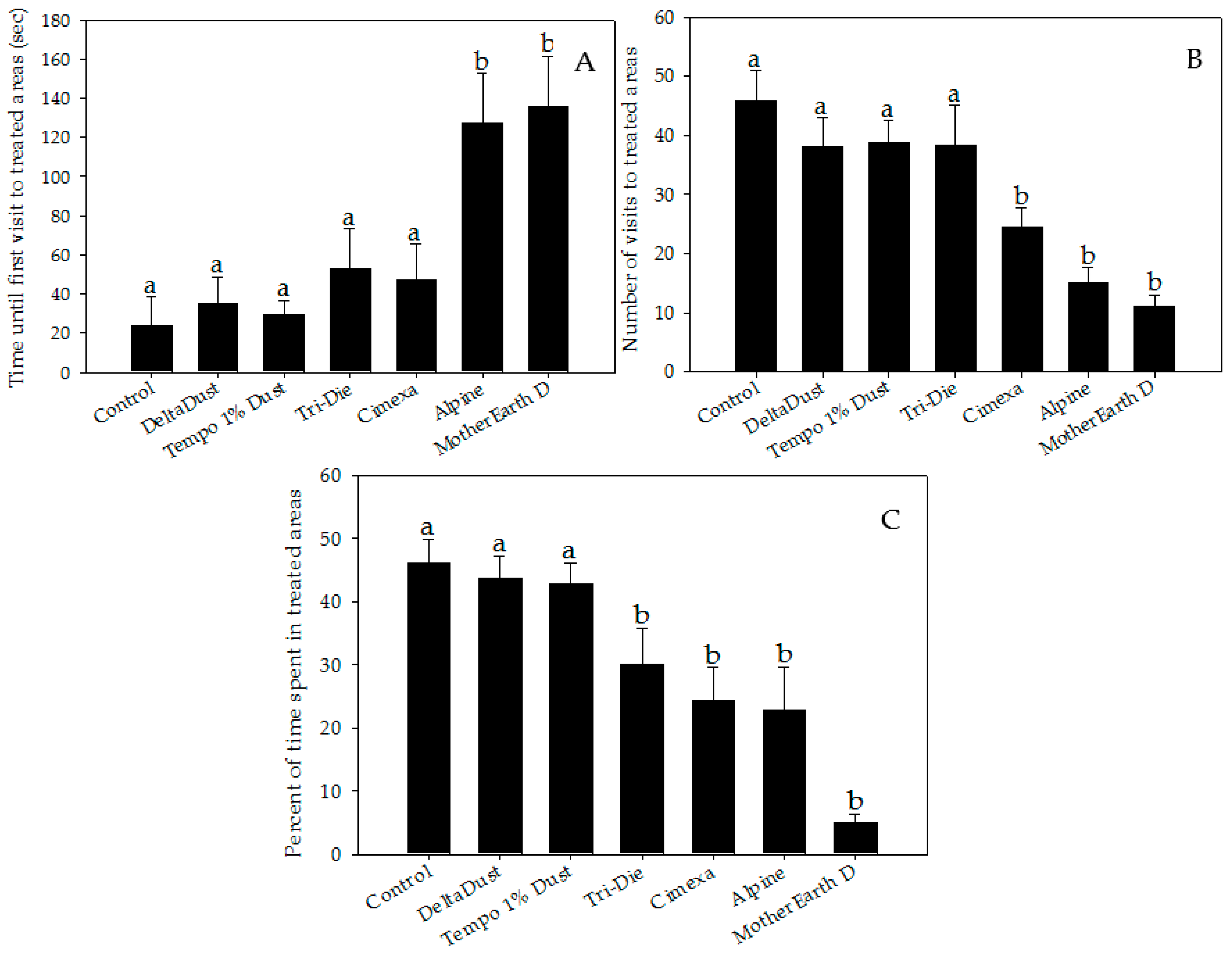