The Mitchell’s satyr, Neonympha mitchellii, is an endangered species that is limited to highly isolated habitats in the northern and southern United States. Conservation strategies for isolated endangered species often implement captive breeding and translocation programs for repopulation. However, these programs risk increasing the spread of harmful pathogens, such as the bacterial endosymbiont Wolbachia. Wolbachia can manipulate the host’s reproduction leading to incompatibilities between infected and uninfected hosts. This study uses molecular methods to screen for Wolbachia presence across the distribution of the Mitchell’s satyr and its subspecies, St. Francis satyr, which are both federally listed as endangered and are considered two of the rarest butterflies in North America. The screens confirmed the presence of Wolbachia in the northern and newly discovered southern populations of the Mitchell’s satyr, but not in the St. Francis satyr population. These results combined with previous reports of Wolbachia in N. mitchellii, highlight that Wolbachia infection varies both geographically and temporally in satyr populations. The temporal variance shows the importance of continued monitoring of Wolbachia infection during conservation programs. To reduce the risk of reproductive incompatibilities, it is advised that all individuals collected for conservation purposes be screened for Wolbachia and recommended to avoid the use of infected individuals for captive breeding and translocation programs. View Full-Text
Keywords: endosymbiont; cytoplasmic incompatibility; captive rearing; conservation; nymphalid endosymbiont; cytoplasmic incompatibility; captive rearing; conservation; nymphalid
►▼ Show Figures 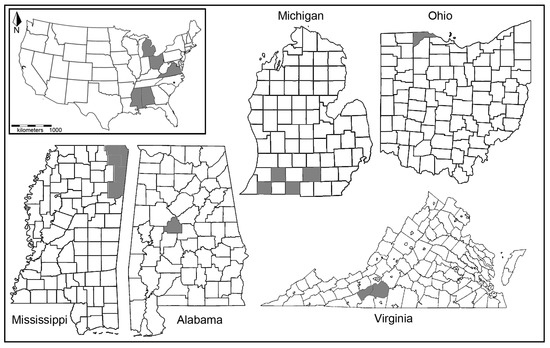