Inside Honeybee Hives: Impact of Natural Propolis on the Ectoparasitic Mite Varroa destructor and Viruses
Next Article in Special Issue

Crapemyrtle Bark Scale: A New Threat for Crapemyrtles, a Popular Landscape Plant in the U.S.

The Asian subterranean termite, Coptotermes gestroi, is a tropical species but has increasingly been collected from the subtropics in recent years, making it sympatric to the Formosan subterranean termite, C. formosanus in at least three areas, Taiwan, Hawaii, and Florida. Simultaneous flights by these two species were observed since 2013 in South Florida, during which interspecies tandems were observed. Laboratory mating of C. formosanus and C. gestroi alates produced hybrid incipient colonies of larger population size. Studies are underway to examine the presence in the field of hybrid colonies in sympatric areas of Taiwan and Florida. Other biological characteristics of C. formosanus × C. gestroi hybrids being studied include temperature tolerance and preference, colony growth rate, wood-consumption rate, and reproductive fertility. This current research aims to determine the potential establishment of a hybrid termite population in south Florida and Taiwan. It investigates the risk of introgressive hybridization in field populations, with an emphasis on its potential ecological, evolutionary, and economic consequences. View Full-Text
Keywords: termite; introgression; hybrid vigor; social insect; structural pest termite; introgression; hybrid vigor; social insect; structural pest
►▼ Show Figures 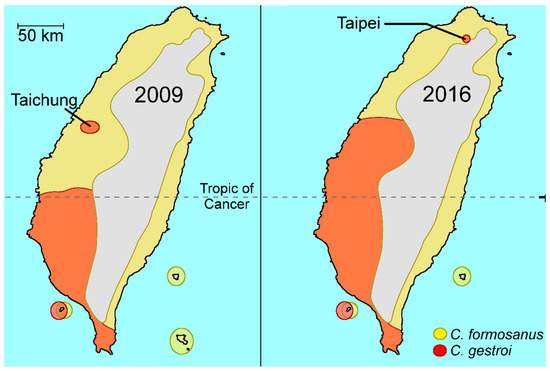