Olfactory communication research with insects utilizing sex pheromones has focused on the effects of pheromones on signal receivers. Early pheromone detection studies using the silkworm moth, Bombyx mori L., and Saturniids led to the assumption that emitters, especially females, are unable to detect their own pheromone. Pheromone anosmia, i.e., the inability of females to detect their conspecific sex pheromone, was often assumed, and initially little attention was paid to female behaviors that may result from autodetection, i.e., the ability of females to detect their sex pheromone. Detection of conspecific pheromone plumes from nearby females may provide information to improve chances of mating success and progeny survival. Since the first documented example in 1972, numerous occurrences of autodetection have been observed and verified in field and laboratory studies. We summarize here a significant portion of research relating to autodetection. Electrophysiological and behavioral investigations, as well as expression patterns of proteins involved in pheromone autodetection are included. We discuss problems inherent in defining a boundary between sex and aggregation pheromones considering the occurrence of autodetection, and summarize hypothesized selection pressures favoring autodetection. Importance of including autodetection studies in future work is emphasized by complications arising from a lack of knowledge combined with expanding the use of pheromones in agriculture. View Full-Text
Keywords: pheromone autodetection; anosmia; electroantennogram; single-sensillum recording; pheromone-binding-protein; intra-sexual communication; plume competition; mating disruption pheromone autodetection; anosmia; electroantennogram; single-sensillum recording; pheromone-binding-protein; intra-sexual communication; plume competition; mating disruption
►▼ Show Figures 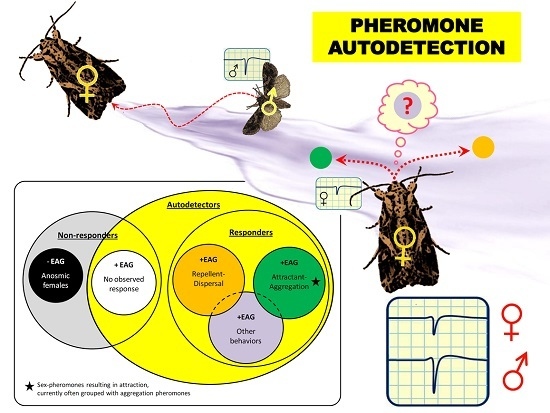