Efficacy of Conventional and Organic Insecticides against Scaphoideus titanus: Field and Semi-Field Trials

Aphrophoridae as Potential Vectors of Xylella fastidiosa in Tunisia

The bacterium Xylella fastidiosa induces many plant diseases causing yield losses and plant death. It is passively delivered into the xylem sap by spittlebugs vectors. These insects are small hemipterans of the Aphrophoridae family mostly ranging from 7 to 9 mm in length. They are quite polyphagous, sucking xylem sap from a multitude food plant species (spontaneous, ornamental and cultivated) present in forest, dry grassland and fruit orchards. Four spittlebug species naturally occur in Tunisia. Two species, Philaenus tesselatus and Neophilaenus campestris, seem to be potential vectors. Consequently, the risk of spreading the bacteria is important because of the exchanges between countries. Knowledge of the vector will enforce the available measures against plant pathogen invasion and help to control plant importations from infected countries.

The present study is an update on the situation of potential vectors of Xylella fastidiosa in Tunisia. Investigations in nine Tunisian regions (Nabeul, Bizerte, Béja, Jendouba, Zaghouan, Kairouan, Ben Arous, Tunis and Manouba) from 2018 to 2021 allowed for the observation of 3758 Aphrophoridae among a total of 9702 Auchenorrhyncha individuals collected by sweep net. Four Aphrophoridae species were identified with Philaenus tesselatus as most abundant (62%), followed by Neophilaenus campestris (28%), Neophilaenus lineatus (5%) and Philaenus maghresignus (5%). Aphrophoridae individuals were found to be particularly abundant in both forests of Nabeul and Jendouba, secondarily in olive groves and dry grassland. Furthermore, their distribution on weed hosts was followed in these two regions where nymphs and adults are widely distributed. P. tesselatus appears to be the most abundant species as determined either by conventional sweep netting for adults or by plant sampling on Sonchus, Smyrnium, Cirsium, Rumex, Polygonum and Picris for nymphs. Limited numbers of adults of P. maghresignus were detected by sweep netting, while nymphs of this species were found on Asphodelus microcarpus only. N. campestris was found in high numbers on plants belonging to the Poaceae family in forests, dry grassland and olive groves whereas N. lineatus occurred on herbs under or near olive trees and in dry grasslands.
Keywords: Auchenorrhyncha; morphology; Xylella fastidiosa; vectors; nymph; seasonal occurrence; forests; dry grassland; fruits-olive orchards; herbaceous plants Auchenorrhyncha; morphology; Xylella fastidiosa; vectors; nymph; seasonal occurrence; forests; dry grassland; fruits-olive orchards; herbaceous plants 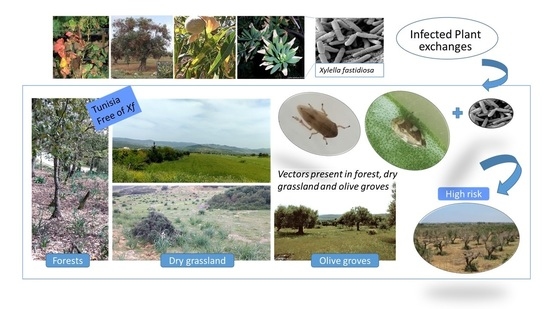