The evolution of flight imposed new challenges on insects when locating and identifying food sources, mates, or enemies. As an adaptation, flying insects developed a remarkably sensitive olfactory system to detect faint odor traces. This ability is linked to the olfactory receptor class of odorant receptors, which are found in insect olfactory sensory neurons. In a subgroup of these neurons, sensitivity can be further enhanced through a process called sensitization. Extracellular calcium ions, calmodulin, and protein kinase C are known to be key factors in this process. While manipulation of mitochondrial calcium im- and export has been shown to influence odor responses in general, the connection of intracellular calcium stores to sensitization has so far been only speculative. Using two pharmacological approaches, we disrupted mitochondrial calcium management in order to explore its importance to sensitization. Overall, our findings reveal that mitochondrial calcium stores are important players in the complex intracellular signaling pathways required for sensitization.

Insects detect volatile chemosignals with olfactory sensory neurons (OSNs) that express olfactory receptors. Among them, the most sensitive receptors are the odorant receptors (ORs), which form cation channels passing Ca2+. OSNs expressing different groups of ORs show varying optimal odor concentration ranges according to environmental needs. Certain types of OSNs, usually attuned to high odor concentrations, allow for the detection of even low signals through the process of sensitization. By increasing the sensitivity of OSNs upon repetitive subthreshold odor stimulation, Drosophila melanogaster can detect even faint and turbulent odor traces during flight. While the influx of extracellular Ca2+ has been previously shown to be a cue for sensitization, our study investigates the importance of intracellular Ca2+ management. Using an open antenna preparation that allows observation and pharmacological manipulation of OSNs, we performed Ca2+ imaging to determine the role of Ca2+ storage in mitochondria. By disturbing the mitochondrial resting potential and induction of the mitochondrial permeability transition pore (mPTP), we show that effective storage of Ca2+ in the mitochondria is vital for sensitization to occur, and release of Ca2+ from the mitochondria to the cytoplasm promptly abolishes sensitization. Our study shows the importance of cellular Ca2+ management for sensitization in an effort to better understand the underlying mechanics of OSN modulation. View Full-Text
Keywords: Drosophila melanogaster; olfactory sensory neuron; odorant receptor; orco; sensitization; mitochondria; permeability transition pore; calcium imaging Drosophila melanogaster; olfactory sensory neuron; odorant receptor; orco; sensitization; mitochondria; permeability transition pore; calcium imaging
►▼ Show Figures 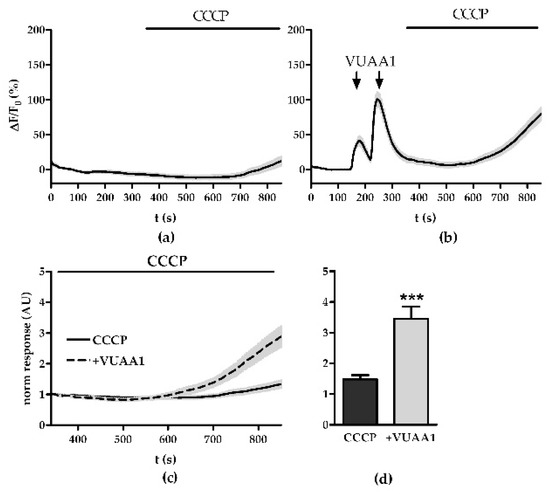