Here, we describe the spreading of a South American firefly in Europe that established itself in northeastern Spain, probably in 2016. The population is expanding quickly (by about 10 km per year) and arrived in 2020 in France. The observations were collected through three citizen science platforms, the Spanish Gusanosdeluz, the Catalan Grup Cucadellum and the French “Observatoire des Vers Luisants et des Lucioles”. This underlines the importance of this type of approach involving the general public for academic research and in following this potentially invasive species. In 2018, the species was described as new to science, but we discovered that it was already designated as Photinus signaticollis by Emile Blanchard in 1846 and originated from Uruguay and Argentina. Evidence is provided for the identity between Spanish and Argentinian specimens via aedeagus analysis and by culturing an Argentinian (and French) larva to adulthood. Therefore, we propose that the original 1846 name is reattributed. Some of the animal’s biology is described (phenology in Spain/France and Argentina, land use, etc.) and we show the earthworm-eating larvae and the pupal stage. The potentially large consequences of having a foreign firefly species that is theoretically invasive, and that eats earthworms, in a European setting, are discussed.

In August 2018, a firefly (Coleoptera: Lampyridae) of American origin was observed in several localities in Girona (Catalonia, Spain) and was described as Photinus immigrans by Zaragoza-Caballero and Vinolas, 2018. Here, we show that this species dispersed very quickly throughout northeastern Spain and was, in 2020, observed in the French Pyrenees. The animal’s quick progress is documented, and part of its biology is described (dispersion speed, land use, phenology, identification of all life stages). An additional population was localized in Extremadura, and its special status is discussed. We were able to determine its Argentinian–Uruguayan origin and propose, therefore, to consider Photinus immigrans as a synonym of Photinus signaticollis (Blanchard, 1846) (=Photinus immigrans Zaragoza-Caballero and Viñolas, 2018, syn. nov.). Our data clearly show that at least the Catalan and French populations are spreading very quickly and are able to settle permanently if adequate ecosystems are found. The species is highly expansive and may well be invasive; our citizen science platforms are ideally suited to monitor their progress throughout Spain and France. This is important for avoiding future ecological problems with diverse native faunas, such as glow-worms, fireflies and earthworms. If no ways are found to stop the species’ progression, the animals will quite probably invade substantial areas of France, Spain and the rest of Europe in the years to come. View Full-Text
Keywords: citizen science; invasive; exotic species; phenology; flight behavior; distribution citizen science; invasive; exotic species; phenology; flight behavior; distribution
►▼ Show Figures 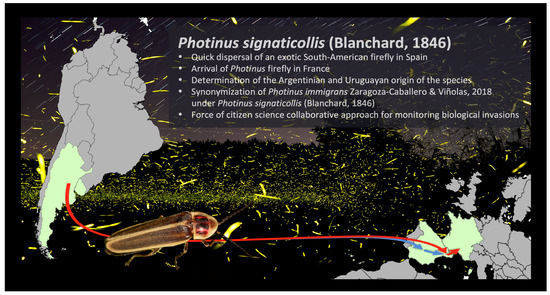