Longer mtDNA Fragments Provide a Better Insight into the Genetic Diversity of the Sycamore Lace Bug, Corythucha ciliata (Say, 1832) (Tingidae, Hemiptera), Both in Its Native and Invaded Areas

The global warming and rapid climate change that we are witnessing is generally influencing all of the living world, so all species must necessarily cope with these changes in order to survive. The ability to withstand environmental stress, especially during the last two decades, has been of great importance for any species’ long-term survival. For that purpose, we studied these abilities in the Drosophila subobscura species, which is known to be a good model organism for studying adaptations to environmental changes such as in temperature. We chose to investigate thermal stress responses in D. subobscura populations from two different altitudes, through four traits linked to stress tolerance: desiccation resistance, heat knock-down resistance, starvation resistance, and chill coma recovery time. Correlations between the populations’ origin and these traits were found, as well as the significant influence of the laboratory thermal conditions and sex on these traits showing that males and cold-adapted populations are expected to fare much worse in a fast-changing warming environment.

Flies were collected in mid-August 2018, from two different elevations, 1080 m (N 43.395255; E 22.603995) and 1580 m (N 43.374145; E 22.618110), along the Stara planina mountain slope in Serbia. GPS was used to determine the geographical coordinates. The sampling locations were separated by an approximately 1200 m-high mountain ridge. However, as expected due to the difference in altitude, they differed in some vegetation characteristics of the habitat, both representing wild forests in closed canopy woodland. The lower locality is mainly composed beech old forest, while the higher locality is a mixture of beech and spruce. Since specific climate data could not be obtained for the sampling sites, the average temperature and humidity (H%) for both localities were measured during collection. The average temperature/humidity in the lower locality was 19.4 °C/65%, Tmax/Hmax was 28.8 °C/87.5%, and Tmin/Hmin was 13.4 °C/42.7%. In the higher locality, the average temperature/humidity was 18 °C/71%, Tmax/Hmax was 27 °C/91.2%, and Tmin/Hmin 13.5 °C/50%. As can be seen, the lower locality has a higher average and maximal temperature compared to the higher one.
The flies were collected in the evening peak of activity, by net sweeping over fermented fruit traps. Wild-caught females were individually placed into the falcon tubes to establish isofemale lines (IF). Approximately 100 flies per population were used for establishing IF lines. All lines were maintained under constant laboratory conditions: temperature of 19 °C, approximately 60% relative humidity, light of 300 lux, and 12/12 h light/dark cycles. After one generation, three to five pairs of males and females from each IF line were used to establish two synthetic mass populations (H—high altitude and L—lower altitude). Mass populations from both localities were used to establish experimental groups at three different temperature regimes: 25 °C, 19 °C, and 16 °C. All groups were maintained on a discrete generation and reared on standard Drosophila medium: 14 g agar, 208 g cornmeal, 188 g sugar, 40 g dry active yeast, 5 g Nipagin diluted in 60 mL of 96% ethanol in 2.2 L distilled water. Mass populations were maintained under described laboratory conditions for 12 generations controlling for larval density by transferring approximately 50 pairs to 12 food vials containing 40 mL of medium and allowing them to lay eggs for three days. After three days, parental generation was transferred to additional 12 fresh food vials for another three days and before being discarded. All the emerged progeny flies were collected, mixed, and then randomly transferred to fresh food vials as parents of the next generation. Therefore, the estimated population census counts approximately 1200 flies per generation.
After 12 generations of maintaining two populations at different temperatures under laboratory conditions, freshly emerged flies (previously kept in the dark to prevent possible mating) were collected. Males and females were separated to prevent mating and transferred to fresh food vials. All experiments, with minor alterations, followed the protocols of [52,65] and were conducted with five- to six-day-old virgin flies (Supplementary Scheme S1).

Single virgin flies were transferred into empty 3 mL tubes. Approximately 100 flies (50 ♀ and 50 ♂) were used from each group. All groups were tested for DR at three temperatures: 25 °C, 19 °C, and 16 °C. Mortality was scored every hour. Flies that were not able to move were considered dead.

Five virgin flies of the same sex were transferred into empty falcon tubes (50 mL) with moistened cotton plugs to prevent desiccation. Ten falcon tubes per experimental group (50 ♀ and 50 ♂) were used and placed at three temperatures: 25 °C, 19 °C, and 16 °C. Mortality was scored every three hours. Flies that were not able to move were considered dead.

Single virgin flies were put into 3 mL tubes which are placed in a water/ice mixture. Approximately 80 (40 ♀ and 40 ♂) flies per group were used. After seven hours on ice, the tubes were moved to room temperature and the recovery time was scored for each fly (in seconds). The flies were considered to have recovered when they were able to stand up.

The data presented in this study are available in article. 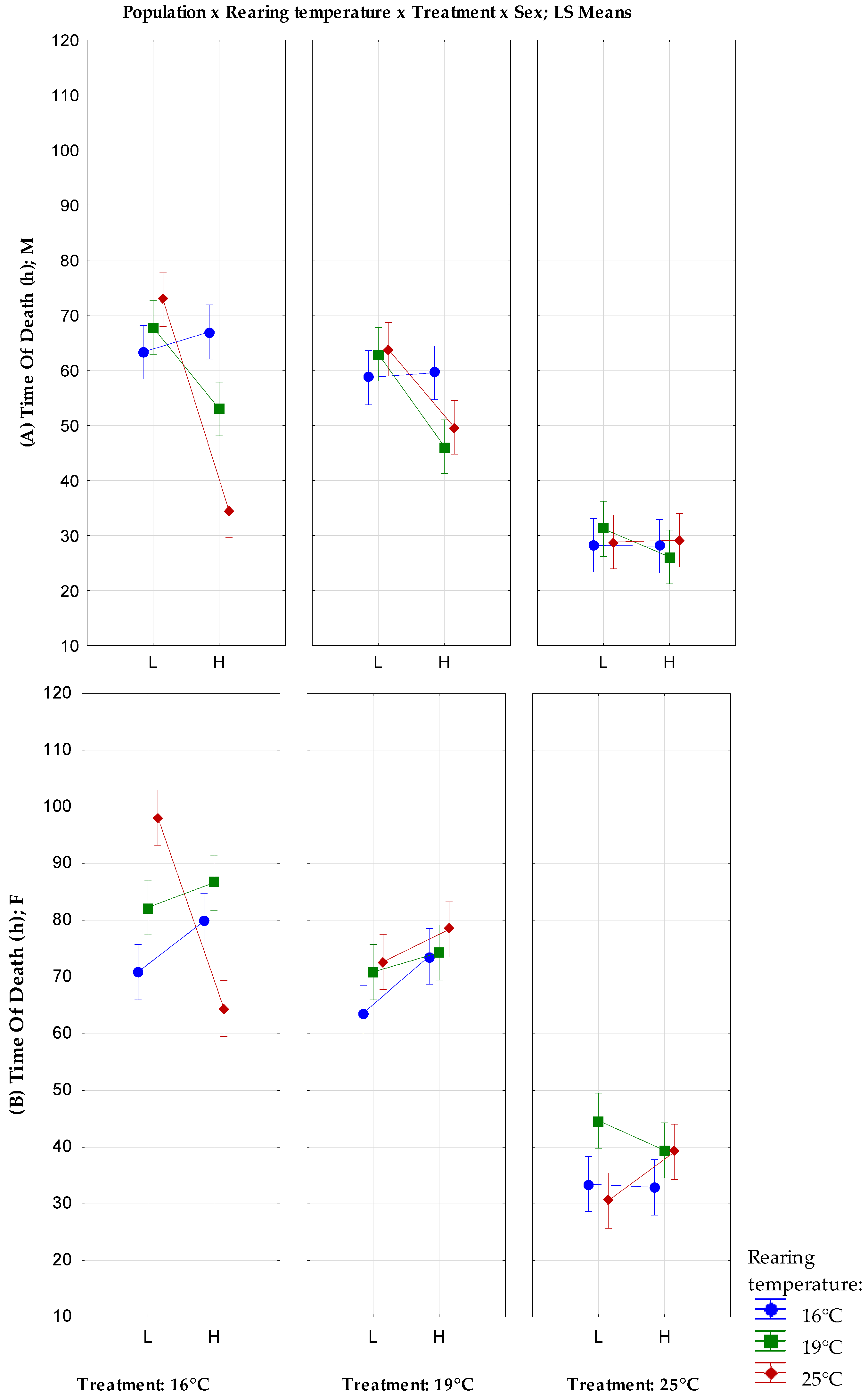 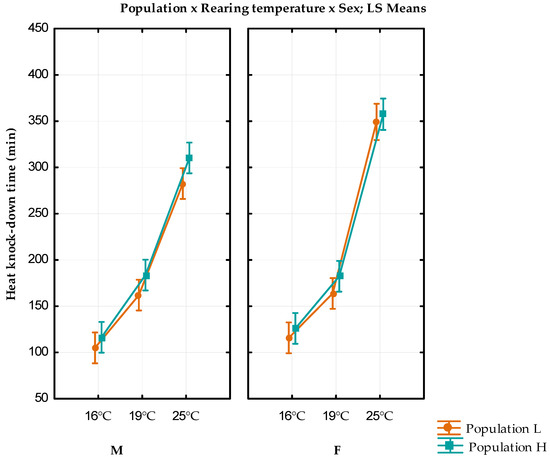 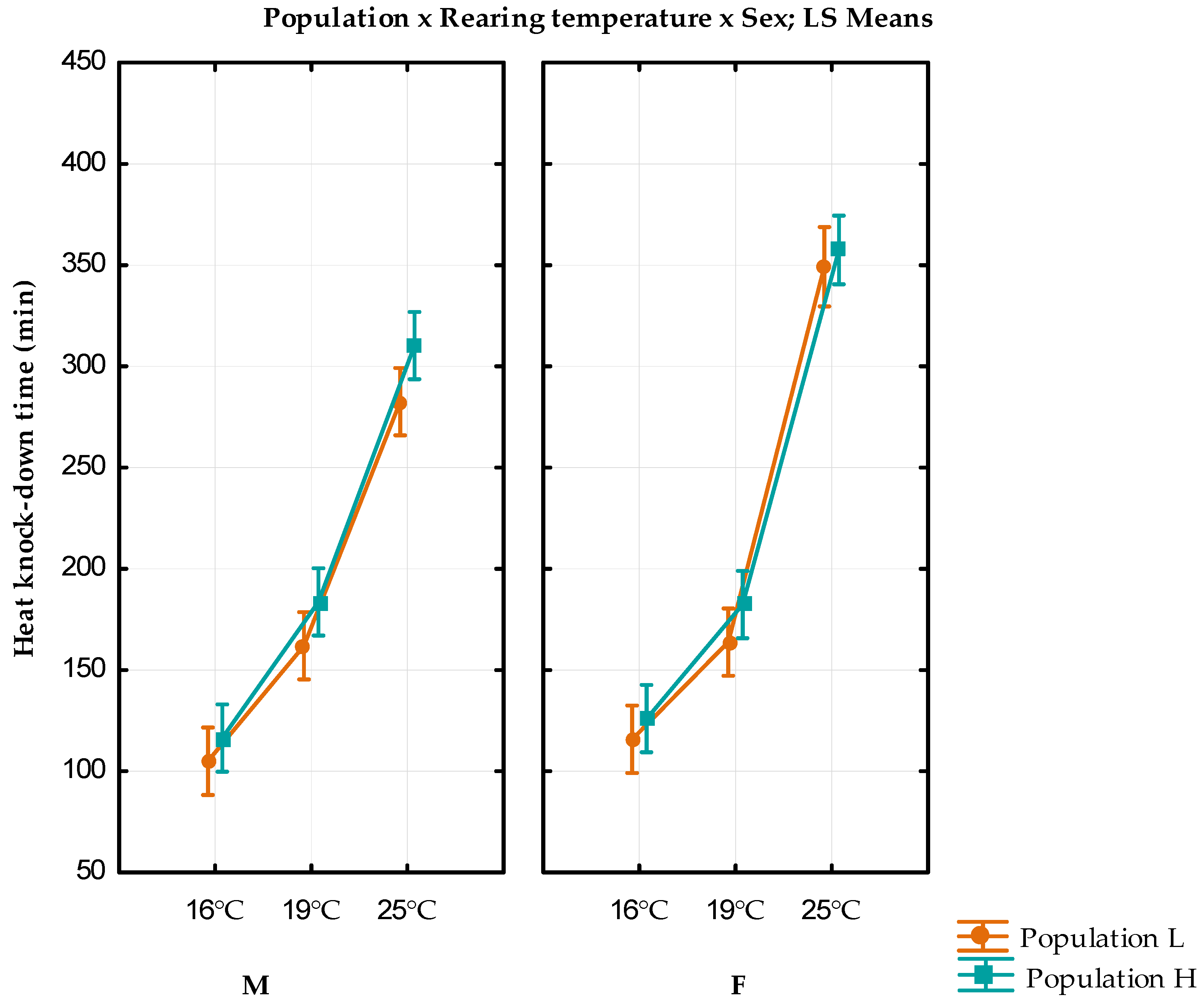 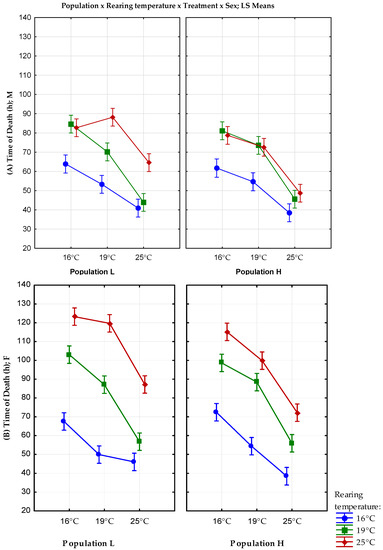 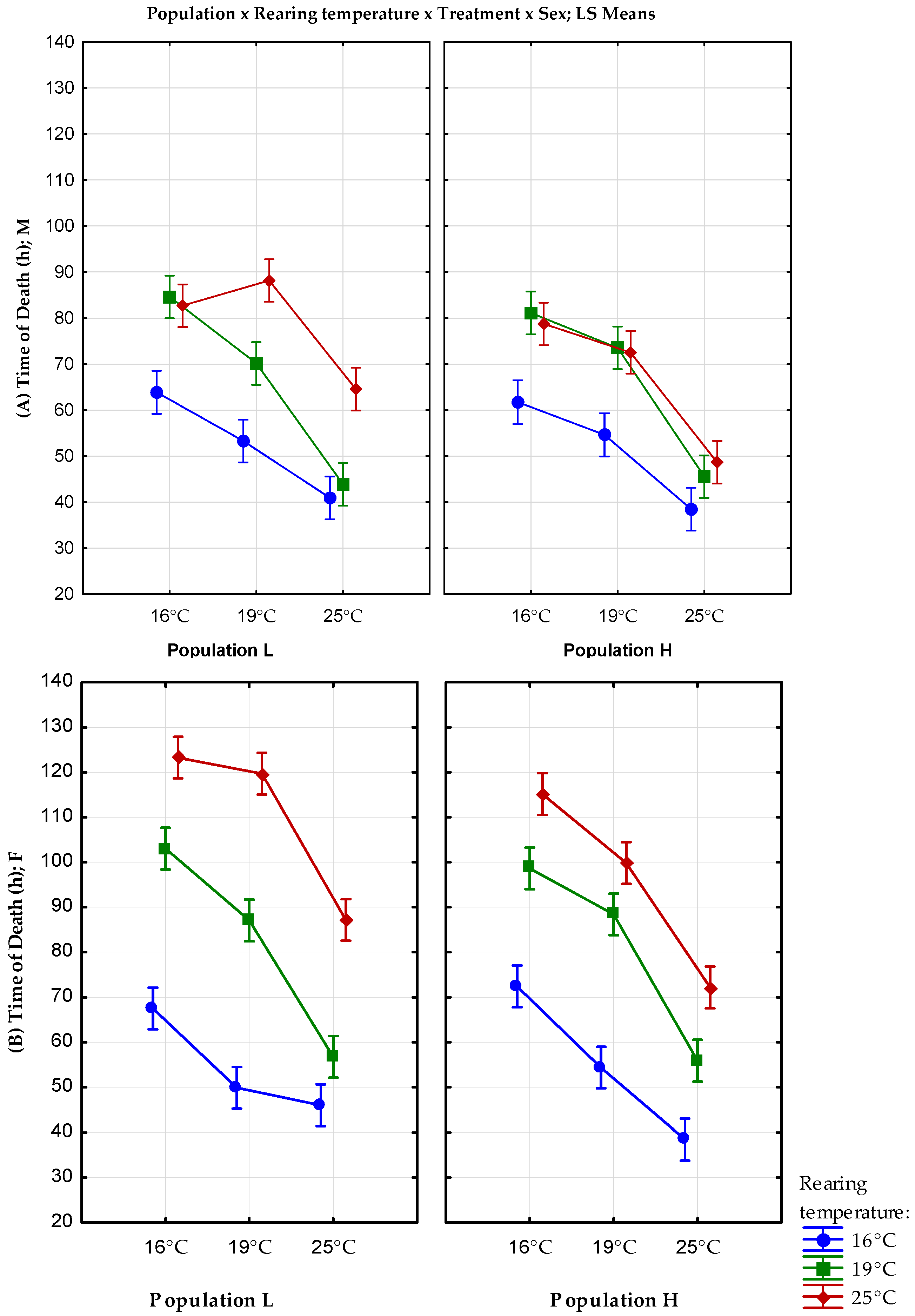 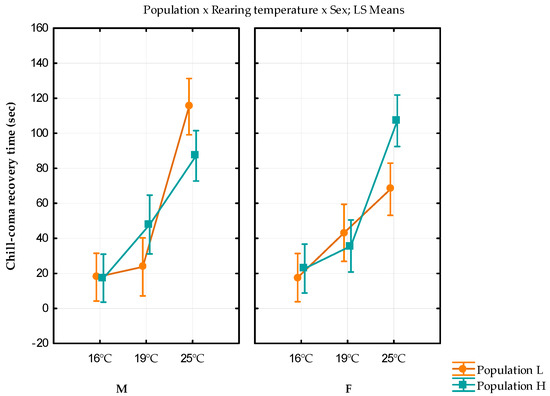 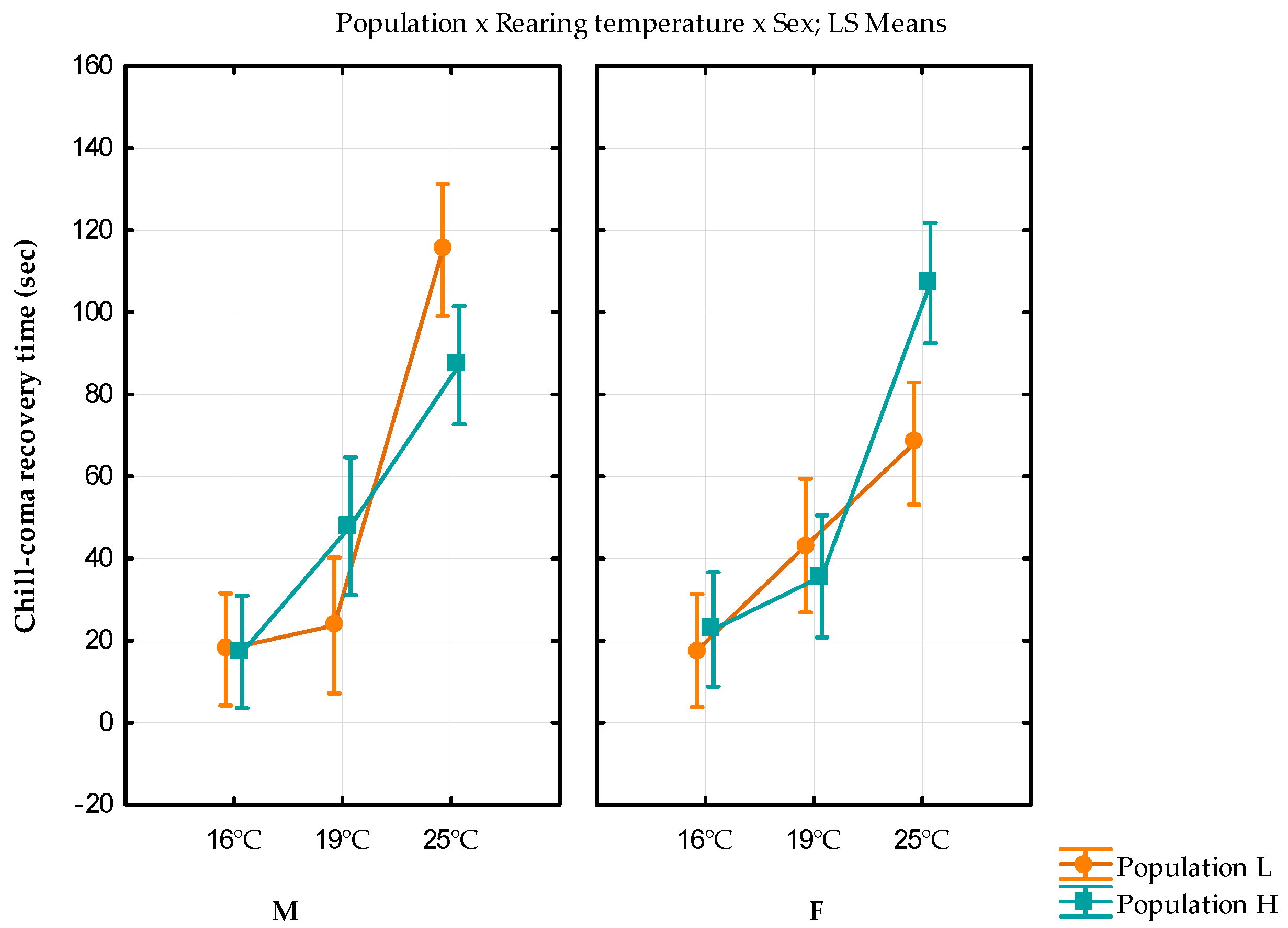