Monarch butterflies, Danaus plexippus, are known the world over for their iconic long-distance migration from the eastern United States and Canada to Mexico for overwintering. In this study, we shed more light on the less well-known migration of monarchs in the Pacific Northwest of North America. Utilizing the efforts of citizen scientists who captive-reared monarchs and tagged them, we confirmed that the majority of monarchs in Washington and Oregon migrate hundreds of kilometers south during late July–October to overwinter at sites on the California coast. However, some eastern Washington and most Idaho monarchs tended to migrate towards the southeast and may have an alternative winter destination, possibly Mexico. Overwintering monarchs in coastal California remain at sites for 2–3 months and can live for up to ten months. A small number of fall migrants may eschew overwintering and join winter-breeding populations in inland central and southern California. Wildfire smoke and infection with a protozoan parasite does not appear to greatly interfere with the survival and migration success of migrating monarch. Our data improve our understanding of western monarch migration, serving as a basis for further studies and providing information for conservation planning.

The fall migration of monarch butterflies, Danaus plexippus (L.), in the Pacific Northwest was studied during 2017–2019 by tagging 14,040 captive-reared and 450 wild monarchs. One hundred and twenty-two captive-reared monarchs (0.87%) were recovered at distances averaging 899.9 ± 98.6 km for Washington-released and 630.5 ± 19.9 km for Oregon-released monarchs. The greatest straight-line release to recovery distance was 1392.1 km. A mean travel rate of 20.7 ± 2.2 km/day and maximum travel of 46.1 km/day were recorded. Recovery rates were greater for Oregon-released monarchs (0.92%) than Washington-released (0.34%) or Idaho-released monarchs (0.30%). Most monarchs (106/122) were recovered SSW-S-SSE in California, with 82 at 18 coastal overwintering sites. Two migrants from Oregon were recovered just weeks after release ovipositing in Santa Barbara and Palo Alto, CA. Two migrants released in central Washington recovered up to 360.0 km to the SE, and recoveries from Idaho releases to the S and SE suggests that some Pacific Northwest migrants fly to an alternative overwintering destination. Monarchs released in southern Oregon into smoky, poor quality air appeared to be as successful at reaching overwintering sites and apparently lived just as long as monarchs released into non-smoky, good quality air. Migration and lifespan for monarchs infected with the protozoan parasite, Ophryocystis elektroscirrha (McLaughlin and Myers), appeared to be similar to the migration and survival of uninfected monarchs, although data are limited. Our data improve our understanding of western monarch migration, serving as a basis for further studies and providing information for conservation planning. View Full-Text
Keywords: overwintering sites; tagging; recoveries; residency; air quality; Ophryocystis elektroscirrha overwintering sites; tagging; recoveries; residency; air quality; Ophryocystis elektroscirrha
►▼ Show Figures 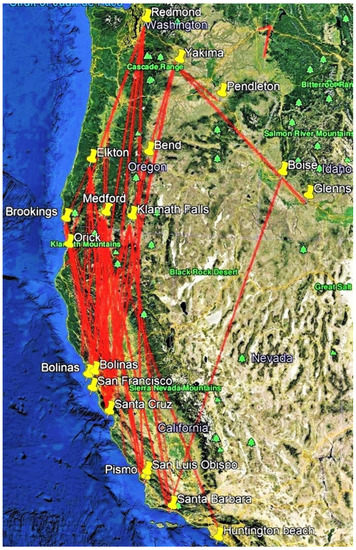