Fungal Communities Vectored by Ips sexdentatus in Declining Pinus sylvestris in Ukraine: Focus on Occurrence and Pathogenicity of Ophiostomatoid Species

Bark beetles serve as vectors to numerous tree pathogens, the most conspicuous guild of which are ophiostomatoid fungi. Most of these fungi are known to cause blue-stain discoloration of wood, and some of them are pathogenic to trees, in certain cases able to kill them. Over the last years, drought-induced stress and attacks by bark beetle Ips sexdentatus resulted in a massive dieback of Pinus sylvestris in Ukraine. Limited and fragmented knowledge is available as to which ophiostomatoid fungi in this geographic area are vectored by Ips sexdentatus, and their roles in tree dieback. It is known, though, that in different parts of Europe those fungal communities might significantly differ. This study represents the first and so far, the most extensive analysis of fungal associates of I. sexdentatus in eastern Europe accomplished combining different methods, using insect, plant, and fungal material, and reports a number of previously unknown insect-vectored pathogens of P. sylvestris. Increasing climate change-related disturbances to forests put reported findings in a broader geographical context.

Drought-induced stress and attacks by bark beetle Ips sexdentatus currently result in a massive dieback of Pinus sylvestris in eastern Ukraine. Limited and fragmented knowledge is available on fungi vectored by the beetle and their roles in tree dieback. The aim was to investigate the fungal community vectored by I. sexdentatus and to test the pathogenicity of potentially aggressive species to P. sylvestris. Analysis of the fungal community was accomplished by combining different methods using insect, plant, and fungal material. The material consisted of 576 beetles and 96 infested wood samples collected from six sample plots within a 300 km radius in eastern Ukraine and subjected to fungal isolations and (beetles only) direct sequencing of ITS rDNA. Pathogenicity tests were undertaken by artificially inoculating three-to-four-year-old pine saplings with fungi. For the vector test, pine logs were exposed to pre-inoculated beetles. In all, 56 fungal taxa were detected, 8 exclusively by isolation, and 13 exclusively by direct sequencing. Those included nine ophiostomatoids, five of which are newly reported as I. sexdentatus associates. Two ophiostomatoid fungi, which exhibited the highest pathogenicity, causing 100% dieback and mortality, represented genera Graphium and Leptographium. Exposure of logs to beetles resulted in ophiostomatoid infections. In conclusion, the study revealed numerous I. sexdentatus-vectored fungi, several of which include aggressive tree pathogens. View Full-Text
Keywords: Ips sexdentatus; Pinus sylvestris; ophiostomatoid fungi; insect-fungal-tree interactions; forest dieback; drought; climate change Ips sexdentatus; Pinus sylvestris; ophiostomatoid fungi; insect-fungal-tree interactions; forest dieback; drought; climate change
►▼ Show Figures 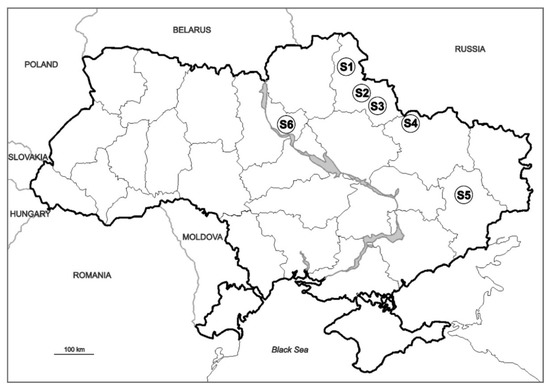