Cotton is a major crop of Pakistan, and Bemisia tabaci (Homoptera: Aleyrodidae) is a major pest of cotton. Due to the unwise and indiscriminate use of insecticides, resistance develops more readily in the whitefly. The present study was conducted to evaluate the resistance development in the whitefly against the different insecticides that are still in use. For this purpose, the whitefly population was selected with five concentrations of each insecticide, for five generations. At G1, compared with the laboratory susceptible population, a very low level of resistance was observed against bifenthrin, cypermethrin, acetamiprid, imidacloprid, thiamethoxam, nitenpyram, chlorfenapyr, and buprofezin with a resistance ratio of 3-fold, 2-fold, 1-fold, 4-fold, 3-fold, 3-fold, 3-fold, and 3-fold, respectively. However, the selection for five generations increased the resistance to a very high level against buprofezin (127-fold), and to a high level against imidacloprid (86-fold) compared with the laboratory susceptible population. While, a moderate level of resistance was observed against cypermethrin (34-fold), thiamethoxam (34-fold), nitenpyram (30-fold), chlorfenapyr (29-fold), and acetamiprid (21-fold). On the other hand, the resistance was low against bifenthrin (18-fold) after selection for five generations. A very low level of resistance against the field population of B. tabaci, at G1, showed that these insecticides are still effective, and thus can be used under the field conditions for the management of B. tabaci. However, the proper rotation of insecticides among different groups can help to reduce the development of resistance against insecticides. View Full-Text
Keywords: Bemisia tabaci; cotton; insecticide resistance; pyrethroids; neonicotinoids; chlorfenapyr; buprofezin Bemisia tabaci; cotton; insecticide resistance; pyrethroids; neonicotinoids; chlorfenapyr; buprofezin
►▼ Show Figures 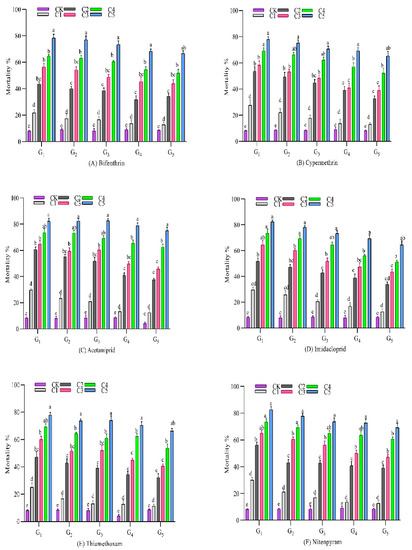