The Structure of the Endophallus Is a New Promising Feature and a Key to Study of Taxonomy of the Subgenus Metallotimarcha of the Genus Timarcha (Coleoptera, Chrysomelidae) in the Caucasus
Previous Article in Journal

What Are the Most Important Factors Influencing Springtail Tetrodontophora bielanensis?

A Small-Scale Analysis of Elevational Species Richness and Beta Diversity Patterns of Arthropods on an Oceanic Island (Terceira, Azores)

We studied the diversity of arthropods in native forests along a 1000 m elevation gradient on Terceira Island, Azores (Portugal). These forests form an isolated and threatened habitat with unique endemic species. We analysed the change in alpha and beta diversity of arthropod species with elevation and if the diversity of endemic, native non-endemic and introduced species responds differently to elevation. Resident arthropods were sampled using SLAM (Sea, Land and Air Malaise) traps between 2014 and 2018. Spiders (Araneae), beetles (Coleoptera), true bugs (Hemiptera) and barklice (Psocoptera), as well as endemic, native and introduced species, were analysed separately. Total species richness decreases with elevation for all species, Coleoptera and Psocoptera, and particularly so for introduced species, but peaks at mid-high elevation for Araneae and endemic species. These patterns are probably driven by unfavourable climatic conditions at higher elevations while being influenced by human disturbance at lower elevations. Total species diversity along the whole elevation gradient is shaped by this decreasing richness as well as the replacement of species at different elevations.

We present an analysis of arthropod diversity patterns in native forest communities along the small elevation gradient (0–1021 m a.s.l.) of Terceira island, Azores (Portugal). We analysed (1) how the alpha diversity of Azorean arthropods responds to increasing elevation and (2) differs between endemic, native non-endemic and introduced (alien) species, and (3) the contributions of species replacement and richness difference to beta diversity. Arthropods were sampled using SLAM traps between 2014 and 2018. We analysed species richness indicators, the Hill series and beta diversity partitioning (species replacement and species richness differences). Selected orders (Araneae, Coleoptera, Hemiptera and Psocoptera) and endemic, native non-endemic and introduced species were analysed separately. Total species richness shows a monotonic decrease with elevation for all species and Coleoptera and Psocoptera, but peaks at mid-high elevation for Araneae and endemic species. Introduced species richness decreases strongly with elevation especially. These patterns are most likely driven by climatic factors but also influenced by human disturbance. Beta diversity is, for most groups, the main component of total (gamma) diversity along the gradient but shows no relation with elevation. It results from a combined effect of richness decrease with elevation and species replacement in groups with many narrow-ranged species. View Full-Text
Keywords: insects; altitude; biodiversity; alpha-diversity; replacement; disturbance insects; altitude; biodiversity; alpha-diversity; replacement; disturbance
►▼ Show Figures 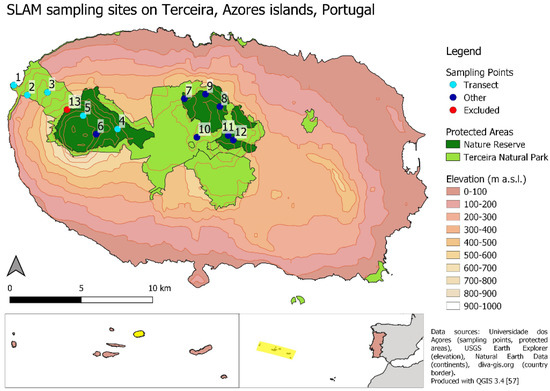 Paulo A. V. Borges
Paulo Borges received a Ph.D. in Insect Ecology from the University of London (Imperial College) in 1997 and is currently leading the Island Biodiversity, Biogeography and Conservation research group (IBBC) and the Arthropod Macroecology Group of cE3c. In addition, he is leading the Azorean Biodiversity Group in Azores (http://www.gba.uac.pt/). He participated in the development of the Azorean Biodiversity Portal (http://azoresbioportal.uac.pt/), a web interface for communicating biodiversity research in the Azorean region to the public.
Zoom | Orient | As Lines | As Sticks | As Cartoon | As Surface | Previous Scene | Next Scene
We use cookies on our website to ensure you get the best experience. Read more about our cookies here.
Accept
We have just recently launched a new version of our website. Help us to further improve by taking part in this short 5 minute survey here. here.
Never show this again