Illuminating Insights into the Biodiversity of the Australian Psyllids (Hemiptera: Psylloidea) Collected Using Light Trapping
Next Article in Special Issue

Evaluation of the Field Efficacy of Heterorhabditis Bacteriophora Poinar (Rhabditida: Heterorhabditidae) and Synthetic Insecticides for the Control of Western Corn Rootworm Larvae

Entomopathogenic nematodes (EPNs) are efficient insect parasites, that are known for their mutualistic relationship with entomopathogenic bacteria and their use in biocontrol. EPNs produce bioactive molecules referred to as excreted/secreted products (ESPs), which have come to the forefront in recent years because of their role in the process of host invasion and the modulation of its immune response. In the present study, we confirmed the production of ESPs in the EPN Heterorhabditis bacteriophora, and investigated their role in the modulation of the phenoloxidase cascade, one of the key components of the insect immune system. ESPs were isolated from 14- and 21-day-old infective juveniles of H. bacteriophora, which were found to be more virulent than newly emerged nematodes, as was confirmed by mortality assays using Galleria mellonella larvae. The isolated ESPs were further purified and screened for the phenoloxidase-inhibiting activity. In these products, a 38 kDa fraction of peptides was identified as the main candidate source of phenoloxidase-inhibiting compounds. This fraction was further analyzed by mass spectrometry and the de novo sequencing approach. Six peptide sequences were identified in this active ESP fraction, including proteins involved in ubiquitination and the regulation of a Toll pathway, for which a role in the regulation of insect immune response has been proposed in previous studies. View Full-Text
Keywords: Heterorhabditis bacteriophora; excreted/secreted products; phenoloxidase; immunity; melanization; Galleria mellonella; virulence Heterorhabditis bacteriophora; excreted/secreted products; phenoloxidase; immunity; melanization; Galleria mellonella; virulence
►▼ Show Figures 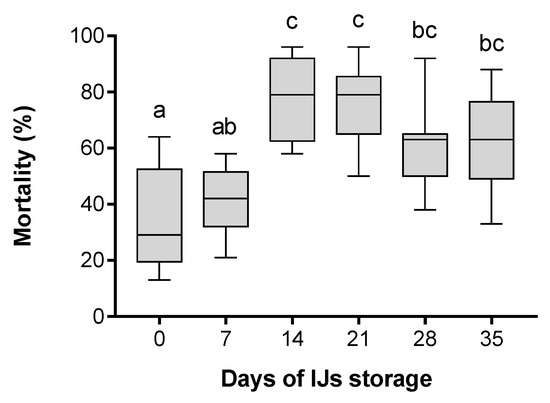