The nest architecture of social insects deeply impacts the spatial distribution of nestmates their interactions, information exchanges and collective responses. In particular, the number of nest entrances can influence the interactions taking place beyond the nest boundaries and the emergence of collective structures like foraging trails. Here, we investigated in the field how the number of nest entrances impacted the foraging dynamics of Myrmica rubra ant colonies. We located the nest entrances where recruitment occurred towards sugar feeders placed in their surroundings. The nests showed one or multiple entrance(s) aggregated in clusters spaced by at least 15 cm. Foragers from colonies with two clusters of entrances were distributed more homogeneously among the feeders than those of colonies with one cluster. In addition, foragers always returned to the first discovered feeder and demonstrated a high fidelity to their original entrance. Finally, a multi-agent model highlighted that additional entrances and clusters of entrances delayed the mobilisation of workers but favoured the simultaneous exploitation of several sources, which was further enhanced by the spatial fidelity of foragers. Multiple nest entrances seem to be a way for medium-sized colonies to benefit from advantages conferred by polydomy while avoiding associated costs to maintain social cohesion. View Full-Text
Keywords: collective behaviour; foraging; nest architecture; social insects collective behaviour; foraging; nest architecture; social insects
►▼ Show Figures 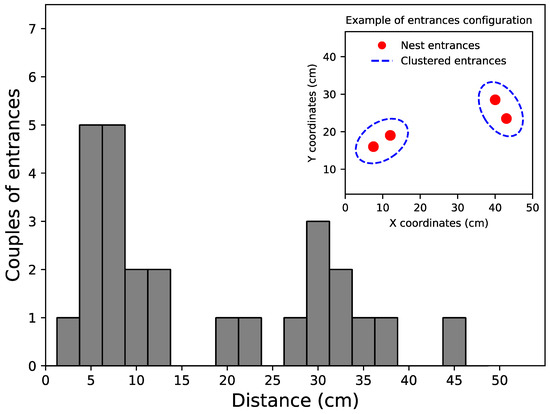