The attack patterns, infestation success and larval development of woodborers within living trees are complex and are largely shaped by host tree characteristics. Following a severe drought in a native eucalypt forest where outbreak densities of a native Australian beetle, the eucalyptus longhorned borer (Phoracantha semipunctata), occurred, a tree dissection study was conducted in Australia. This involved felling 40 trees each of jarrah (Eucalyptus marginata) and marri (Corymbia calophylla) that were cut into 1-m sections and neonate larval galleries, larvae in pupal cells and adult borer emergence were measured and added to give total numbers per tree to determine the within-tree distribution and survival of P. semipunctata. There was a significant impact on larval survival in both species, in contrast, pupal survival remained high. Within-tree distribution of P. semipunctata was directional with borer emergence and incidence of larval galleries both negatively associated with tree section height above the ground and positively associated with section diameter and bark thickness, reaching a maximum towards the base of trees. High incidence and survival in lower thicker tree sections indicate a more conducive environment for larval development, in contrast to poor larval survival in smaller thinner sections at the top of trees. The dependence of larval survival on tree characteristics controlling the within-tree distribution of borer emergence is emphasized, and needs to be considered when estimating the spread of borer populations during outbreaks.
Keywords: survival; Phoracantha semipunctata; within-tree; larval incidence; galleries; emergence survival; Phoracantha semipunctata; within-tree; larval incidence; galleries; emergence

The study was conducted in the NJF in the Darling Range, Southwestern Australia. This region comprises one of the five biodiversity hotspots in Mediterranean climate regions [41,42] and experiences cool, wet winters (rainfall from 800–1100 mm) followed by dry summers lasting up to six months, where total rainfall can be <50 mm [43]. In the NJF, jarrah and marri comprise the main overstorey species that can reach 30 m high with an understorey of Banksia grandis Willd, B. attenuata R.Br., B. littoralis R.Br., Allocasuarina fraseriana Miq. and grass trees (Xanthorrhoea preissii Endl.) with ground cover composed of many species of shrubs and herbaceous perennials [44].
A severe drought and heat-wave event in 2010/2011 resulted in patches of forest suffering severe canopy die-off [45] and subsequent attack by P. semipunctata [36]. In March–April 2012 following the die-off event, four of these die-off patches were used, two were located in the West-central jarrah forest (32°13′36.96″ S, 116°8′1.24″ E), and two sites 40-km (32°34′32.40″ S, 116°0′53.11″ E) to the south. Within each site, 10 jarrah and 10 marri trees with no live canopy present were selected and were at sufficient distance apart to account for variations throughout the whole site.

3.2. Incidence of Larval Galleries in Sapwood and Survival

Approximately half the neonate larvae in both tree species survived to maturity, indicating the stability of the larval environment was affecting the development of P. semipunctata. This was evident with high gallery incidence and the formation of galleries that overlapped each other destroying the thin partition of sapwood that separated individual larvae during development. This suggests aggressive interference competition (conspecific facultative predation) was occurring [49,50,51]. Younger larvae may have become more susceptible to cannibalism by more mature larvae [8,25,27,28], and larvae that had been delayed in their development were potentially eating the frass made by older larvae [2]. However, feeding was concentrated in certain areas of sapwood, while in other areas, sapwood remained largely uneaten. Larvae may have missed these areas of sapwood due to variation in phloem density within the tree [7,11]. Areas of uneaten sapwood may also be related to the linear nature of gallery formation that forced larvae to feed in more confined areas of sapwood increasing the likelihood of competition among conspecifics. Phloem/sapwood tissues also decrease in quality after tree death [1,26,27], and later developing larvae could not compete for limited sapwood resources that at the time were likely to have also been low in nutrition. Cannibalism from larvae trying to consume diminishing food resources (exploitative competition) during development was also found for P. semipunctata on eucalypts in Africa [25] and is an important ecological trait held by other Cerambycidae [52,53,54]. Other factors that may have contributed to the poor survival, although were not investigated, include parasitoids and predators [2], poor nitrogen content levels of eucalypts [11,55], thickness of phloem [7], and carbohydrate and cellulose levels [56].
The high pupal survival (above 80%) of P. semipunctata in its native Australian habitat is in contrast to the low proportion of mature larvae P. semipunctata in a non-native habitat that did not finish constructing pupation chambers [8,27]. Other Cerambycidae have failed to complete pupation [57] and this may be due to unsuitable microclimate conditions and microbial infection [8]. Additionally, within the native range of P. semipunctata in the NJF the lower pupal survival in jarrah compared to marri may be related to jarrah wood being 20% harder than marri [40,58], which may have exhausted larvae as they may not have had enough energy to excavate pupal tunnels, form pupal chambers in dry nutrient poor heartwood [8] of jarrah, survive pupation, and emerge.
The dependence of increased gallery incidence, improved survival and greatest borer emergence of P. semipunctata in basal tree sections, having larger diameters and thicker bark, indicates the sapwood environment in these parts of trees are more conducive for borer development. The influence of bark thickness was more pronounced where the thicker bark in marri compared to jarrah may have contributed to higher borer emergence, with some indication of improved larval survival, despite lower sections of both tree species having similar diameters. Additionally, differences in bark structure between tree species may have modified the within-tree environment, with grooves and fissures in jarrah formed by having stringybark compared to the tessellated bark in marri [38], creating more gaps and allowing moderation of airflow, temperature and humidity for developing larvae. Lower regions of trees are important for producing the highest densities of several Cerambycidae, with a sawyer beetle (Monochamus sutor Linnaeus) in larch, red oak borer (Enaphalodes rufulus Haldeman) and great capricorn beetle (C. cerdo) in oaks and a buprestid the emerald ash borer (A. planipennis) in ash [5,6,59,60]. Thicker bark may have provided a more stable and cooler environment within the sapwood, with reduced desiccation and protection from predators, and was suggested to be associated with increased densities of larvae and adult emergence of other Cerambycidae [5].
Reduced larval survival in upper sections of jarrah and marri trees indicates unfavourable conditions were limiting the ability of borer larvae to complete their development. These upper tree sections with smaller diameters may have limited the amount of food resources available and increased the potential for competition between larvae in a poorer quality environment for larval development, limiting their survival. In previous studies using cut logs, the highest mortality occurred in smaller logs having the highest density of neonates [5]. As trees used in this trial had lost their entire canopy following the drought collapse [36], leaving the upper sections of trees with thinner (<10 mm) bark to dry out quickly. This then meant there was insufficient time for borers to fully develop before sapwood became too dry, reducing their survival. This drying effect may also have reduced nutrient content as it is known to affect the performance of phytophagous insects [61]. It appears rapid drying influenced the decline in borer emergence of P. semipunctata with height, where a previous study showed low survival of P. semipunctata occurred when larvae began to develop in dry wood [62]. On the other hand, when P. semipunctata larvae are at high densities in other eucalypts, they develop quickly to avoid the problem of reduced nutrition in drier hosts where sapwood resources quickly became depleted [2,8].

Larger diameters and thicker bark in basal tree sections provided a better environment for larval development resulting in higher survival and greater borer emergence of P. semipunctata. Final densities of borers emerging from trees were largely controlled by the survival of neonate larvae where less than half did not reach maturity. This was attributed to upper tree sections having low survival and reduced incidence of larval feeding activity within the phloem/sapwood. This was a unique study that provided some insight into the natural behaviour of P. semipunctata attacking Eucalyptus trees in its native Australian habitat, where it is not normally considered a pest. The influence of bark thickness in defining the zone of larval activity where borer development is maximized may be useful for managing the invasiveness of P. semipunctata during attacks on Eucalyptus trees in exotic forests where the borer has become established.

This research was funded in part by a National Climate Change Adaptation Research Facility (NCCARF) grant and Murdoch University.

The authors thank Parks and Wildlife at Department of Biodiversity Conservation and Attractions for their support in accessing the Northern Jarrah Forest. The research was conducted under a flora licensing permit and Regulation 4 Authority. 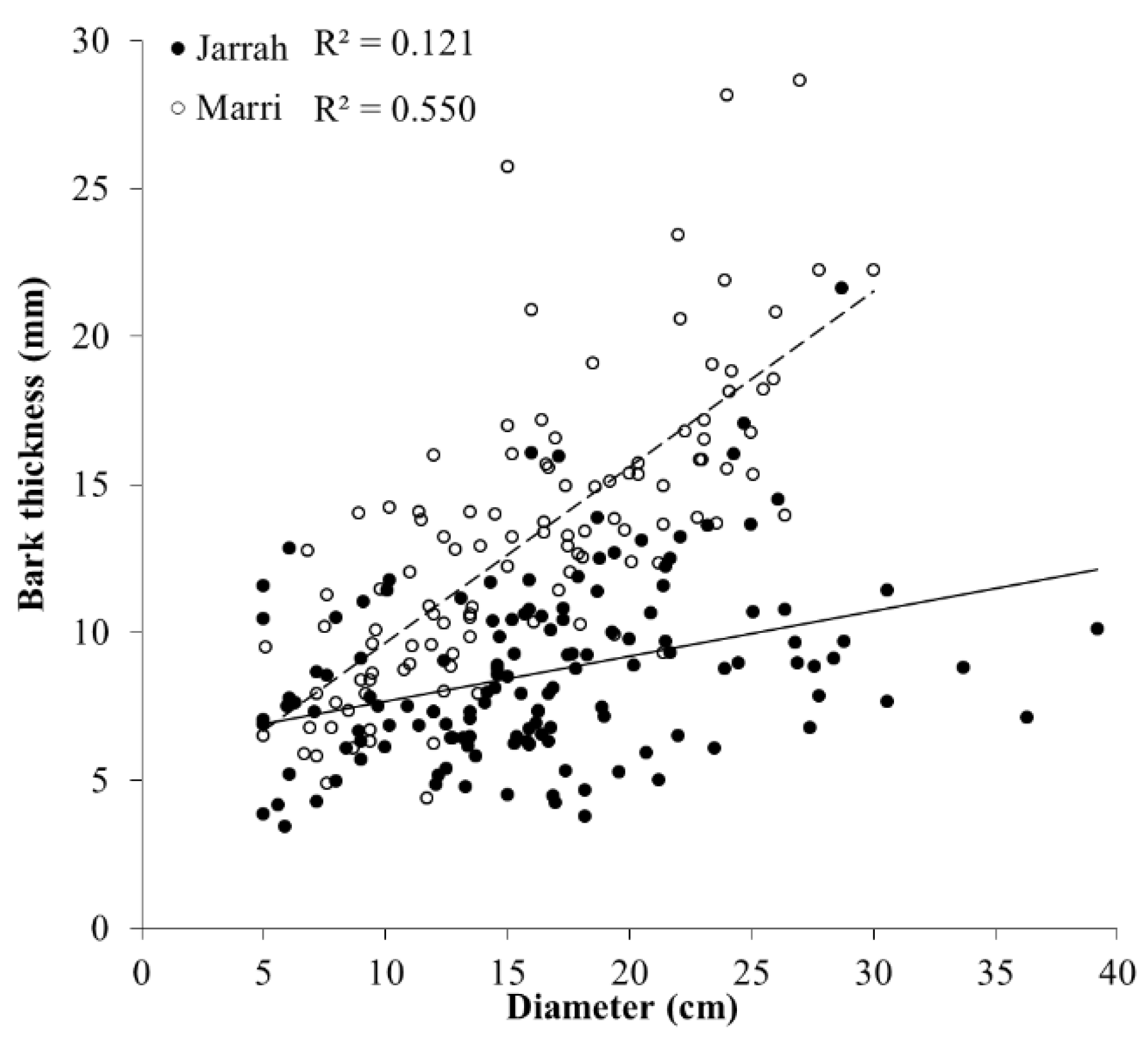 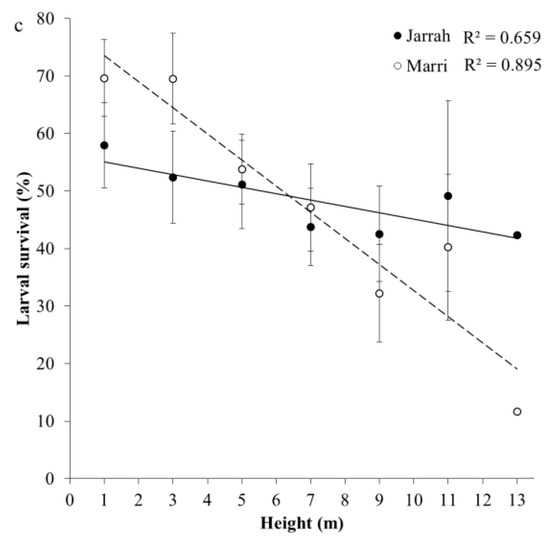