The long-tailed silverfish (Ctenolepisma longicaudata) has recently made its appearance and demonstrated a tremendous proliferation in Norway, where it is currently considered a major indoor nuisance pest in modern buildings. To reduce the risk of human pesticide exposure, several baits with indoxacarb, clothianidin, fipronil or imidacloprid as the active ingredient were investigated to provide knowledge regarding their potential for integrated pest management solutions. Primary and secondary poisoning, as well as the durability of baits, were experimentally evaluated in bioassays. Baits with indoxacarb, clothianidin and fipronil killed more than 90% of the experimental insects (primary poisoning) when presented in competition with food. Only indoxacarb produced high mortality when dead conspecifics were consumed (secondary poisoning) and resulted in more than 75% mortality. The efficacy of baits with indoxacarb against C. longicaudata was also found to be very long. Laboratory degraded baits were consumed and induced high levels of mortality for more than a month, and field degraded baits for more than 6 months. Adults and juveniles were equally affected in the experiments. Primary and secondary toxicity in combination with long durability and effects on both life stages tested suggest that the bait has high-level potential as a safe control strategy against the long-tailed silverfish if indoxacarb is used as the active ingredient. View Full-Text
Keywords: durability; efficiency; IPM; pest; pesticide survival durability; efficiency; IPM; pest; pesticide survival
►▼ Show Figures 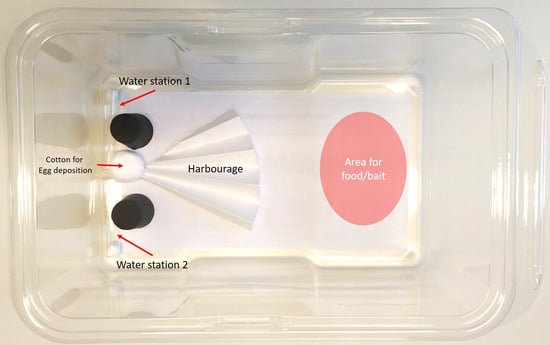