Species Composition, Temporal Abundance and Distribution of Insect Captures Inside and Outside Commercial Peanut Shelling Facilities

Mobility of Stored Product Beetles after Exposure to a Combination Insecticide Containing Deltamethrin, Methoprene, and a Piperonyl Butoxide Synergist Depends on Species, Concentration, and Exposure Time

Adults of Rhyzopertha dominica (F.), the lesser grain borer, Cryptolestes ferrugineus (Stephens), the rusty grain beetle, and Sitophilus oryzae (L.), the rice weevil, were exposed for 1, 24, and 72 h on wheat treated with concentrations of 0% (untreated controls) to 100% of the proposed label rate of an experimental formulation of deltamethrin + Methoprene + piperonyl butoxide synergist. Movement and velocity of movement were assessed after each exposure time using a camera-based monitoring system (Ethovision®). Movement of R. dominica decreased with increasing concentration and exposure time, so that movement had virtually ceased at the 48 and 72 h exposures. Cryptolestes ferrugineus was less susceptible compared to R. dominica, but there was still a general pattern of decreased movement and velocity of movement with increasing concentration and exposure time. Sitophilus oryzae was the least susceptible species, with less differences at the 1 h exposure interval compared to the other two species, but after 24–72 h, the patterns of declining movement and velocity were apparent as the concentration increased. Data were analyzed using curve-fit equations to show the relationship between concentration and exposure time for each species. Results show that the Ethovison system can be used to assess the sub-lethal effects of exposure to grain protectant insecticides and elucidate behavioral variation between different stored product insects. View Full-Text
Keywords: chemical control; insect growth regulator; sublethal effects; indirect toxicity; movement; postharvest chemical control; insect growth regulator; sublethal effects; indirect toxicity; movement; postharvest
►▼ Show Figures 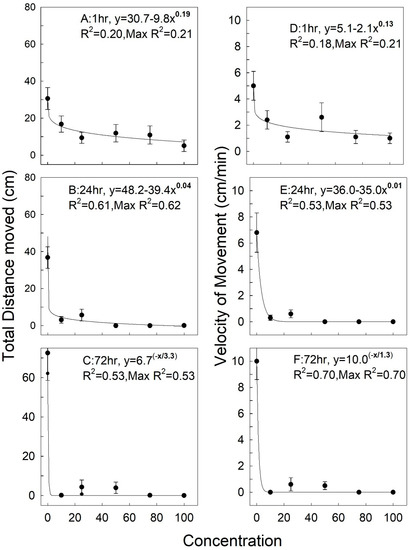