Although a large number of pesticides of different compositions are regularly used in agriculture, the impact of pesticides on the physiology of field crops is not well understood. Pesticides can produce negative effects on crop physiology―especially on photosynthesis―leading to a potential decrease in both the growth and the yield of crops. To investigate these potential effects in greenhouse sweet peppers, the effect of 20 insecticides and 2 fungicides (each sprayed with a wetting agent) on the photosynthesis of sweet pepper leaves was analyzed. Among these pesticides, nine caused significant reductions in photosynthetic activity. The effects were observed in distinctive ways—either as a transitory drop of the photosynthetic-rate values, which was observed at two hours after the treatment and was found to have recovered after 24 h, or as a sustained reduction of these values, which remained substantial over a number of days. The results of this study suggest that the production of a crop may substantially benefit when the frequent use of pesticides can be substituted with alternative pest control methods (e.g., biological control). Our results advocate further investigation of the potential impact of pesticides, either alone or in combination, on the photosynthesis of crop plants. View Full-Text
Keywords: insecticides; photosynthetic rate; phytotoxicity; horticulture; pests and diseases; IPM insecticides; photosynthetic rate; phytotoxicity; horticulture; pests and diseases; IPM
►▼ Show Figures 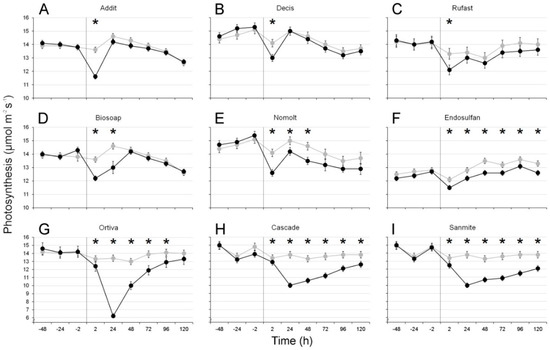