A Guild-Based Protocol to Target Potential Natural Enemies of Philaenus spumarius (Hemiptera: Aphrophoridae), a Vector of Xylella fastidiosa (Xanthomonadaceae): A Case Study with Spiders in the Olive Grove

The olive grove is a key landscape across the Mediterranean basin. This agroecosystem is threatened by Xylella fastidiosa, the causal agent of the olive tree quick decline syndrome, Philaenus spumarius being the main vector. A way to limit pest populations relies on the use of biological control agents such as arthropods. Among them, spiders are generalist predators with different hunting strategies that feed mostly on insects and can contribute to limit pests. In this work, field and laboratory data were used to provide a protocol aiming to facilitate the selection of species of spiders among different guilds that could represent potential natural enemies of P. spumarius. Sampling of spiders was conducted in olive groves in northeastern Portugal. Two species, namely the orb-weaver Araniella cucurbitina and the ambusher Synema globosum, were selected according to the dominant guilds of spiders inhabiting the olive crop. We tested the differences of potential predatory efficiency using classical functional response tests with P. spumarius as prey. A type-II functional response was found for A. cucurbitina, whereas a type-I response was found for S. globosum. This difference uncovers a different potential efficiency among the two species as natural enemies of P. spumarius with relevant implications at high prey density in the field. A conceptual workflow to follow the fieldwork and selection of species for further work (i.e., laboratory assays) is provided and discussed. Standardized methods regarding the assessment of the suitability and efficiency of potential natural enemies are essential for the integration of results at different geographical extents and crops. Selecting functional counterparts such as different species of predators occurring at different locations that use the same prey (e.g., a pest) in the same way (e.g., hunting strategy) would facilitate developing biological control schemes. View Full-Text
Keywords: functional response; hunting strategy; quick decline syndrome; spittlebug; predators; biological control functional response; hunting strategy; quick decline syndrome; spittlebug; predators; biological control
►▼ Show Figures 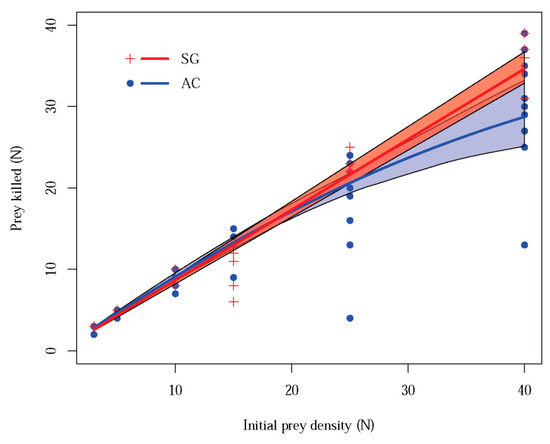