Halyomorpha halys is a severe agricultural pest of Asian origin, which threatens cultivation of vegetables and fruits worldwide. Classical biological control is foreseen as the most effective approach to reduce populations of H. halys. The egg parasitoid Trissolcus japonicus is the most important candidate biological control agent. Adventive populations of T. japonicus are already present in limited distributions in North America and in Europe. Trissolcus mitsukurii is a second Asian species that attacks H. halys and has been found in Northern Italy. Efficient laboratory rearing procedures of these biological control agents are needed for release programs to help control the pest. We present data that will help to optimize progeny production with minimal effort.

Halyomorpha halys is a severe agricultural pest of Asian origin that has invaded many countries throughout the world. Pesticides are currently the favored control methods, but as a consequence of their frequent use, often disrupt Integrated Pest Management. Biological control with egg parasitoids is seen as the most promising control method over the long-term. Knowledge of the reproductive biology under laboratory conditions of the most effective candidates (Trissolcus japonicus and Trissolcus mitsukurii) for optimizing production for field releases is strongly needed. Rearing of these egg parasitoids was tested by offering three different host supply regimes using new emerged females and aged, host-deprived females in different combinations. Results showed a mean progeny per female ranging from 80 to 85 specimens for T. japonicus and from 63 to 83 for T. mitsukurii. Sex ratios were strongly female biased in all combinations and emergence rates exceeded 94% overall. Cumulative curves showed that longer parasitization periods beyond 10–14 days (under the adopted rearing regimes) will not lead to a significantly increase in progeny production. However, ageing females accumulate eggs in their ovaries that can be quickly laid if a sufficient number of host eggs are supplied, thus optimizing host resources. Our data showed that offering H. halys egg masses to host-deprived female Trissolcus once a week for three weeks allowed its eggs to accumulate in the ovary, providing the greatest number of offspring within a three week span. View Full-Text
Keywords: brown marmorated stink bug; classical biological control; ovaries; longevity brown marmorated stink bug; classical biological control; ovaries; longevity
►▼ Show Figures 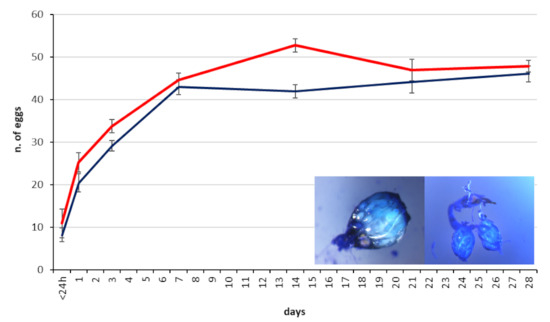