Plants in the Genus Tephrosia: Valuable Resources for Botanical Insecticides

Pest insects cause tremendous damage and losses to global agriculture, and their control relies mainly on chemical insecticides, which are greatly harmful for human health and the environment. Many Ajuga plant species have secondary metabolites such as phytoecdysteroids (analogues of insect steroid hormones—ecdysteroid) that control insect development and reproduction. In this study, the effect of ingestion of Ajuga iva phytoecdysteroid plant extract on the growth and development of the African cotton leafworm Spodoptera littoralis was carried out. Our results clearly showed the susceptibility of S. littoralis to phytoecdysteroid ingestion. Crude leaf extracts and fractionated phytoecdysteroids significantly increased mortality of first-instar S. littoralis by up to 87%. Third-instar larval weight gain decreased significantly by 52%, and crude leaf extract (250 ppm) reduced gut size, with relocation of nuclei and abnormal actin-filament organization compared to the controls. In conclusion, the use of phytoecdysteroids against pest insects is not an alternative for chemical insecticides, but they could have an important role in integrated pest management strategies for controlling S. littoralis and possibly other lepidopterans. 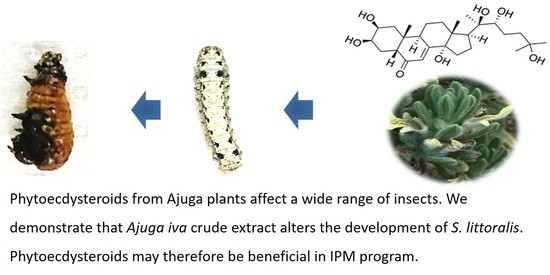