The Indian meal moth Plodia interpunctella (Hübner) (Lepidoptera: Pyralidae), is controlled by commercial mating disruption dispensers using passive release to emit high concentrations (relative to females or monitoring lures) of their principal sex pheromone component, (9Z,12E)-tetradecadienyl acetate. Since P. interpunctella is sexually active throughout the scotophase, an assay system was developed to determine the importance of direct interaction of the male with the dispenser, and whether exposure to mating disruption early in the night is sufficient to suppress mating throughout the night. Exposure to mating disruption dispensers in the mating assay chamber for the first two hours of a 10-h scotophase significantly reduced mating when females were introduced four hours later. Mating was also reduced to a lesser degree in a concentration-dependent manner based solely on re-emission of pheromone, and when males were exposed outside the mating assay chamber. These results indicate that the commercial mating disruption dispensers can suppress mating throughout the night based on interaction with the dispenser early in the night. Desensitization resulting from attraction to a high-concentration pheromone source is important to this suppression, but other factors such as re-emission from the environment may also have a role. These observations imply a non-competitive mechanism for P. interpunctella with the product studied, and suggest that effectiveness of the mating disruption dispenser might be augmented by using them in conjunction with another formulation such as an aerosol or micro-encapsulated product. View Full-Text
Keywords: stored products pest; Indian meal moth; Plodia interpunctella; mating disruption stored products pest; Indian meal moth; Plodia interpunctella; mating disruption
►▼ Show Figures 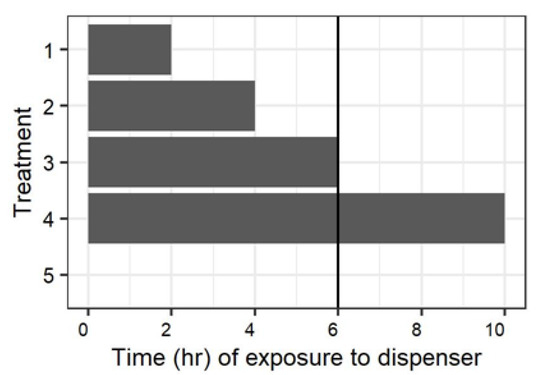