Feeding Delivery of dsHvSnf7 Is a Promising Method for Management of the Pest Henosepilachna vigintioctopunctata (Coleoptera: Coccinellidae)

Despite the severe ecological damage and economic loss caused by invasive species, the factors contributing to successful invasion or displacement remain elusive. The whitefly, Bemisia tabaci (Gennadius), is an important invasive agricultural pest worldwide, causing severe damage to numerous crops by feeding or transmitting plant viruses. In this study, we monitored the dynamics of two invasive whitefly cryptic species, Middle East-Asia Minor 1 (MEAM1) and Mediterranean (MED), in Jiangsu, China, from 2005–2016. We found that B. tabaci MED quickly established and asserted dominance over MEAM1, resulting in their population displacement in Jiangsu in only three years (from 2005 to 2008). We further investigated the possible mechanisms underlying the successful invasion and competitive displacement from a genetic perspective. Based on sequencing of mitochondrial gene sequences from large numbers of whitefly samples, multiple invasion events of MED were validated by our genetic analyses. MED invaded Jiangsu starting from multiple introduction sites with secondary and/or subsequent invasive events. This may favor their invasion and displacement of MEAM1. This study advances our understanding of the mechanisms that enabled the successful invasion of MED. View Full-Text
Keywords: Bemisia tabaci; invasion; displacement; mechanism; multiple invasion Bemisia tabaci; invasion; displacement; mechanism; multiple invasion
►▼ Show Figures 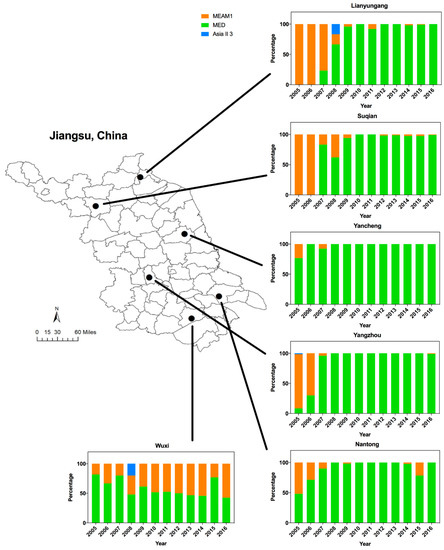