Telenomus remus, a Candidate Parasitoid for the Biological Control of Spodoptera frugiperda in Africa, is already Present on the Continent

The fall armyworm, Spodoptera frugiperda, a moth originating from tropical and subtropical America, has recently become a serious pest of cereals in sub-Saharan Africa. Biological control offers an economically and environmentally safer alternative to synthetic insecticides that are being used for the management of this pest. Consequently, various biological control options are being considered, including the introduction of Telenomus remus, the main egg parasitoid of S. frugiperda in the Americas, where it is already used in augmentative biological control programmes. During surveys in South, West, and East Africa, parasitized egg masses of S. frugiperda were collected, and the emerged parasitoids were identified through morphological observations and molecular analyses as T. remus. The presence of T. remus in Africa in at least five countries provides a great opportunity to develop augmentative biological control methods and register the parasitoid against S. frugiperda. Surveys should be carried out throughout Africa to assess the present distribution of T. remus on the continent, and the parasitoid could be re-distributed in the regions where it is absent, following national and international regulations. Classical biological control should focus on the importation of larval parasitoids from the Americas. View Full-Text
Keywords: biological control; egg parasitism; fall armyworm; invasive species; maize; Spodoptera frugiperda; Telenomus remus biological control; egg parasitism; fall armyworm; invasive species; maize; Spodoptera frugiperda; Telenomus remus
►▼ Show Figures 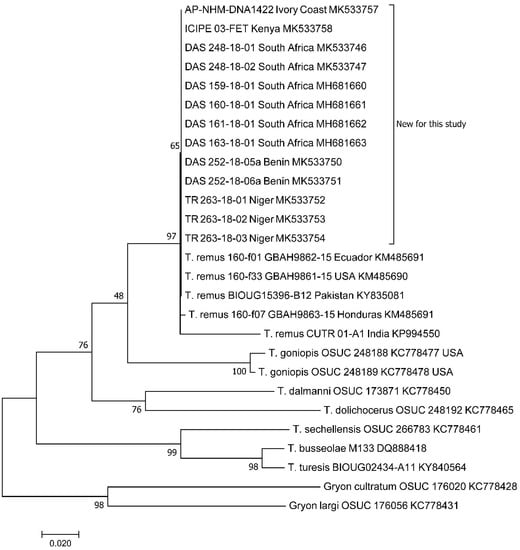