Xenorhabdus nematophila and Photorhabdus luminescens are entomopathogenic bacterial symbionts that produce toxic proteins that can interfere with the immune system of insects. Herein, we show that outer membrane proteins (OMPs) could be involved as bacterial virulence factors. Purified totals OMPs of both bacterial species were injected into fifth instar larvae of Spodoptera exigua Hübner. Larvae were surveyed for cellular defenses fluctuations in total haemocyte counts (THC) and granulocyte percentage and for the humoral defenses protease, phospholipase A2 (PLA2), and phenoloxidase (PO) activities at specific time intervals. Changes in the expression of the three inducible antimicrobial peptides (AMPs), cecropin, attacin, and spodoptericin, were also measured. Larvae treated with OMPs of both bacterial species had more haemocytes than did the negative controls. OMPs of X. nematophila caused more haemocyte destruction than did the OMPs of P. luminescens. The OMPs of both bacterial species initially activated insect defensive enzymes post-injection, the degree of activation varying with enzyme type. The AMPs, attacin, cecropin, and spodoptericin were up-regulated by OMP injections compared with the normal larvae. The expression of these three AMPs was maximal at four hours post injection (hpi) with P. luminescens OMPs treatment. Expression of the three AMPs in X. nematophila treated insects was irregular and lower than in the P. luminescens OMPs treatment. These findings provide insights into the role of OMPs of entomopathogenic nematode bacterial symbionts in countering the physiological defenses of insects. View Full-Text
Keywords: antimicrobial peptides; cellular defense; insect pathology; phenoloxidase; phospholipase A2; protease antimicrobial peptides; cellular defense; insect pathology; phenoloxidase; phospholipase A2; protease
►▼ Show Figures 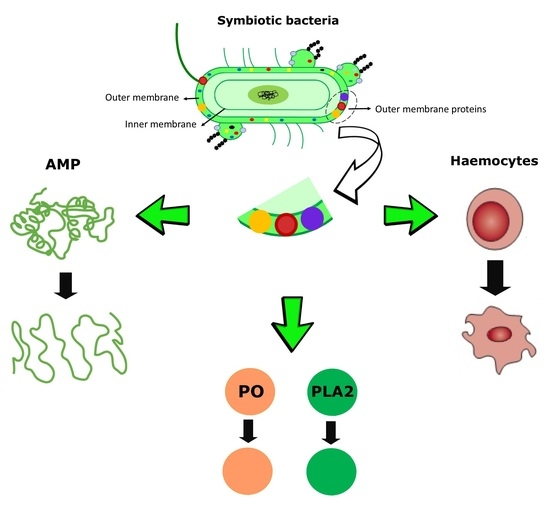