Use of DNA Markers for Grape Phylloxera Population and Evolutionary Genetics: From RAPDs to SSRs and Beyond
Previous Article in Special Issue 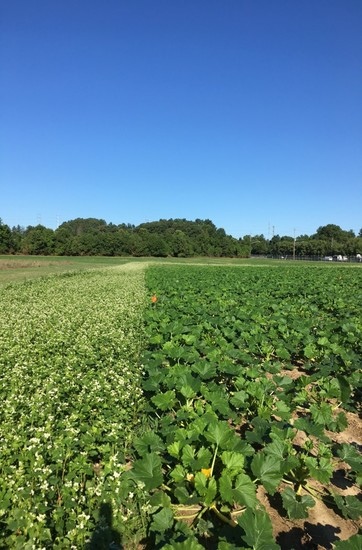 In 2016 and 2017, field tests were conducted in an urban location at the Beltsville Agricultural Research Center (BARC), Beltsville, MD. Squash fields were planted using Cucurbita pepo cv. Slick Pik YS26′ where buckwheat, F. esculentum, was planted at a rate of approximately 45 kg/ha in a three-meter-wide border around the treated squash fields compared with control squash fields where a three-meter-wide border was mowed (Figure 1). Each year, four squash fields were planted from seed at a rate of 3.36 kg/ha in 0.76 m rows 12–14 June 2016 and 28–30 June 2017. Planting was delayed in 2017 due to heavy rains. There were two blocks, at least 700 m apart, with a treated and a control field in each block. Squash fields were planted in different locations within the same two blocks each year. In both years, the treated and control fields were at least 50 m apart. Each field had two plots, a center plot and an edge plot. Each plot was 10 × 10 m with at least a 15-m distance between plots. There were approximately 400 squash plants in each plot. The center plot was located in the center of the field and the edge plot was located in a corner of the field so that two sides of the plot were adjacent to the border of the field. Squash fields were located adjacent to soybean, corn, and pepper fields.
Once the buckwheat plants started blooming, every squash plant in each experimental plot was checked once a week for the presence of naturally occurring squash bug egg masses and adult squash bugs of both species. In 2016, plots were checked weekly from 27 June–19 August. In 2017, plots were checked weekly from 17 July–26 August. The buckwheat plants continued to bloom throughout the experiment. All egg masses and adults found in the experimental plots were collected and brought into the laboratory. The number of eggs in each egg mass was counted. Egg masses were checked for signs of predation that leave visible evidence of damage on eggs. Egg masses were kept in Petri dishes in an incubator (25 °C; 16:8 [L:D]) until either nymphs or parasitoids emerged. Eggs with no emergence were dissected and unemerged nymphs or adult parasitoids were counted. Parasitism rates were calculated by combining the number of emerged and unemerged parasitoids. The rates of nymph eclosion, parasitism, predation, or unknown egg mortality were calculated by dividing the number of eggs in each category by the total number of eggs in each egg mass.
Adult squash bugs were maintained in an incubator (25 °C; 16:8 [L:D]) for up to a month in cylindrical plastic containers (19.3 cm height by 20.0 cm diameter) (Pioneer Plastics, Inc., Eagan, MN, USA). Each container had a hole (approximately 14 cm in diameter) in the lid covered with a fine mesh screen, a filter paper on the bottom, and two cotton plugged glass shell vials filled with water attached with a rubber band to prevent them from rolling. Adults were maintained on fresh cuttings of cucurbit plants grown in a greenhouse. After the death of an adult squash bug, the container was checked for the presence of a tachinid fly pupa. The pupa was placed in a Petri dish and kept in the incubator until the emergence of the adult tachinid fly. Tachinid parasitoids were kept in a vial of alcohol as voucher specimens.
Ethanol-preserved specimens were dehydrated through increasing concentrations of ethanol and transferred to hexamethyldisilazane (HMDS) before point-mounting. MWG identified Ooencyrtus anasae using a Leica M205C stereomicroscope with 10 × oculars and a Leica LED ring light source was used for point-mounted specimen observation [47]. All specimens were determined to genus by sight identification or using Gibson et al. [48]. Specimens were identified to species using relevant keys and primary literature [49]. All species identifications were corroborated through comparison with authoritatively identified specimens in the Smithsonian National Museum of Natural History.

The proportion of people living in urban areas is projected to increase to 70% by 2050 [55]. Therefore, it is important to find ways to increase biodiversity and ecosystem services within urban habitats. As the rate of urbanization increases, urban agriculture will become increasingly more important for food security and for maintaining biodiversity [2,55]. The use of floral resources on urban farms is an important component of conserving pollinators and other beneficial insects. However, there is conflicting evidence concerning the effectiveness of floral resources for improving the biological control of pest populations.
Flowering buckwheat did not increase parasitism rates of squash bugs in squash fields. The egg parasitoid, G. pennsylvanicum, was equally distributed in center and edge plots in fields with and without a flowering border. The egg parasitism rates increased gradually over the season, as successive generations of parasitoids emerged from host eggs within the squash fields. Overall, adult squash bugs collected in edge plots were more likely to be parasitized than those collected in center plots in fields with and without a flowering border. This difference was due to increased parasitism rates of A. tristis adults in edge plots in 2016.
Pollinators and other beneficial insects were frequently observed visiting the flowering buckwheat (Cornelius, personal observation). Therefore, the use of flowering buckwheat as a border around squash fields may have a positive effect on ecosystem services despite not augmenting parasitism rates against squash bugs. However, flowering plants could also attract herbivorous pests. Further research could examine the effects of flowering buckwheat on populations of other beneficial insects and herbivorous pests. It is also possible that other species of flowering plants or that planting strips of flowering plants between rows of squash could have a greater effect on biological control of squash bugs than using flowering plants as a border. Although floral resources play an important role in increasing populations of pollinators and other beneficial insects, their role in enhancing parasitoid populations in squash fields requires further investigation.

We would like to thank Madeline Topf and Jing S. Hu for their invaluable assistance in collecting data for this study. We would like to thank Don Weber for reviewing an earlier draft of this manuscript. The USDA is an equal opportunity provider and employer. All mentions of trade names are for informational purposes only and not an endorsement by USDA. 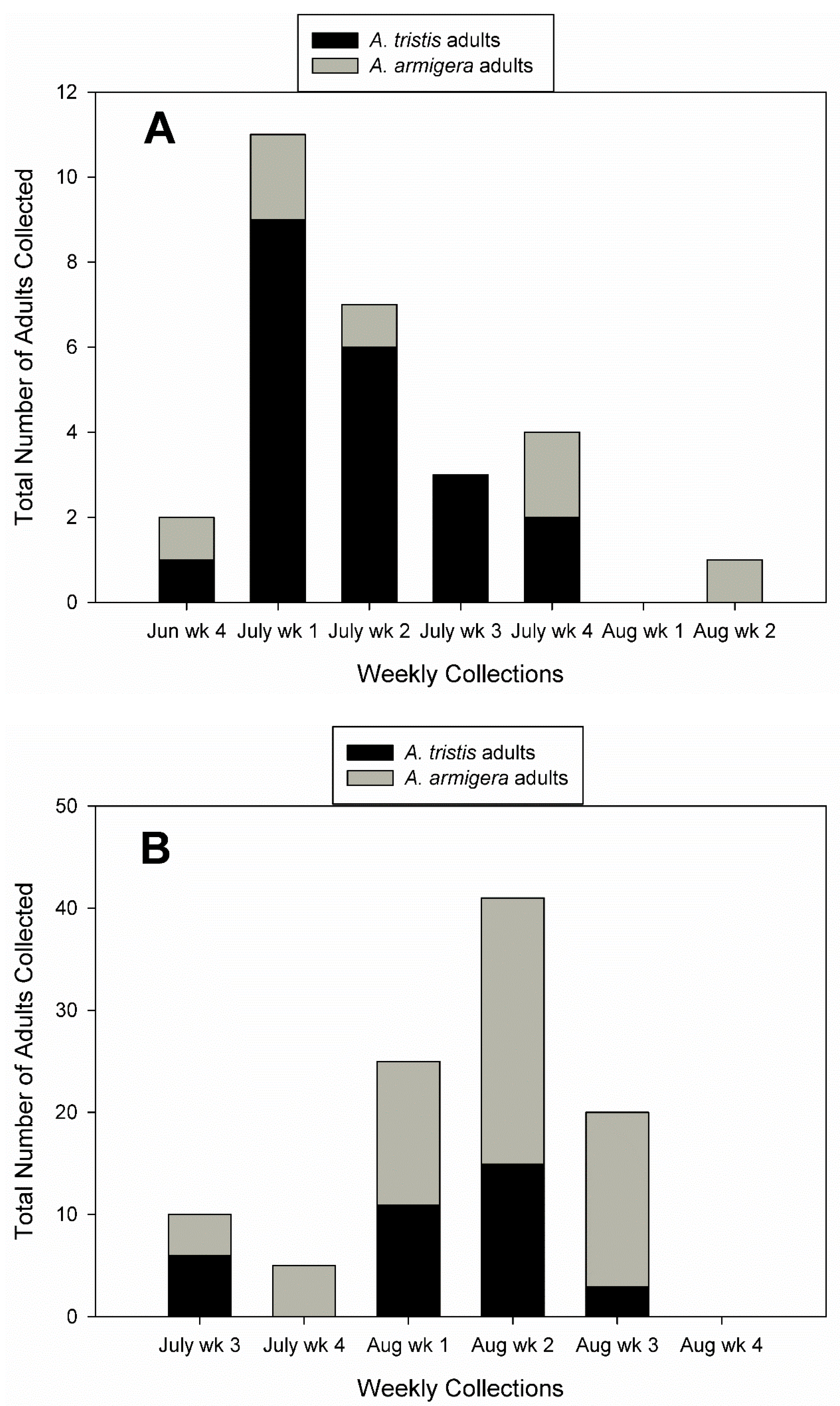 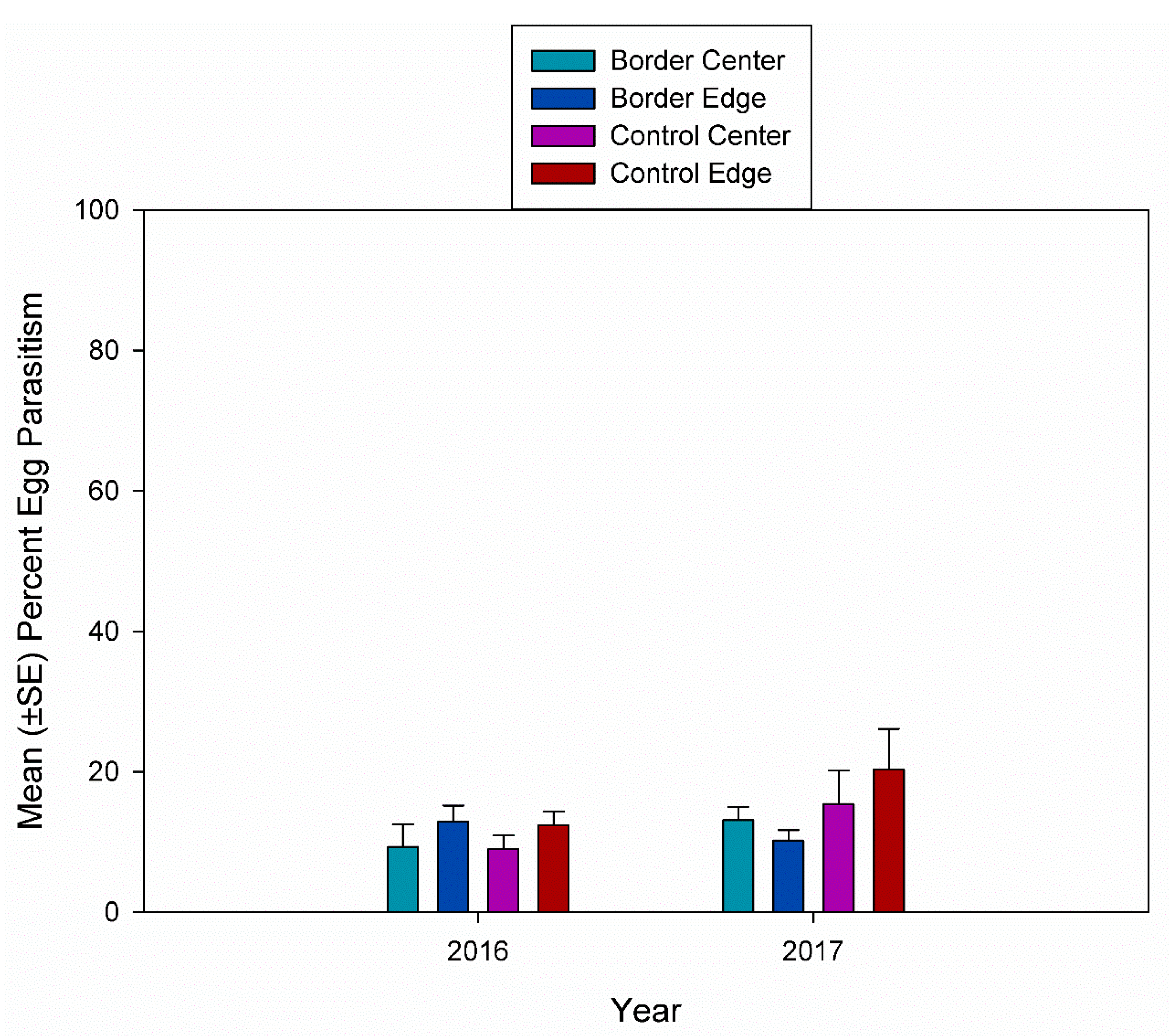 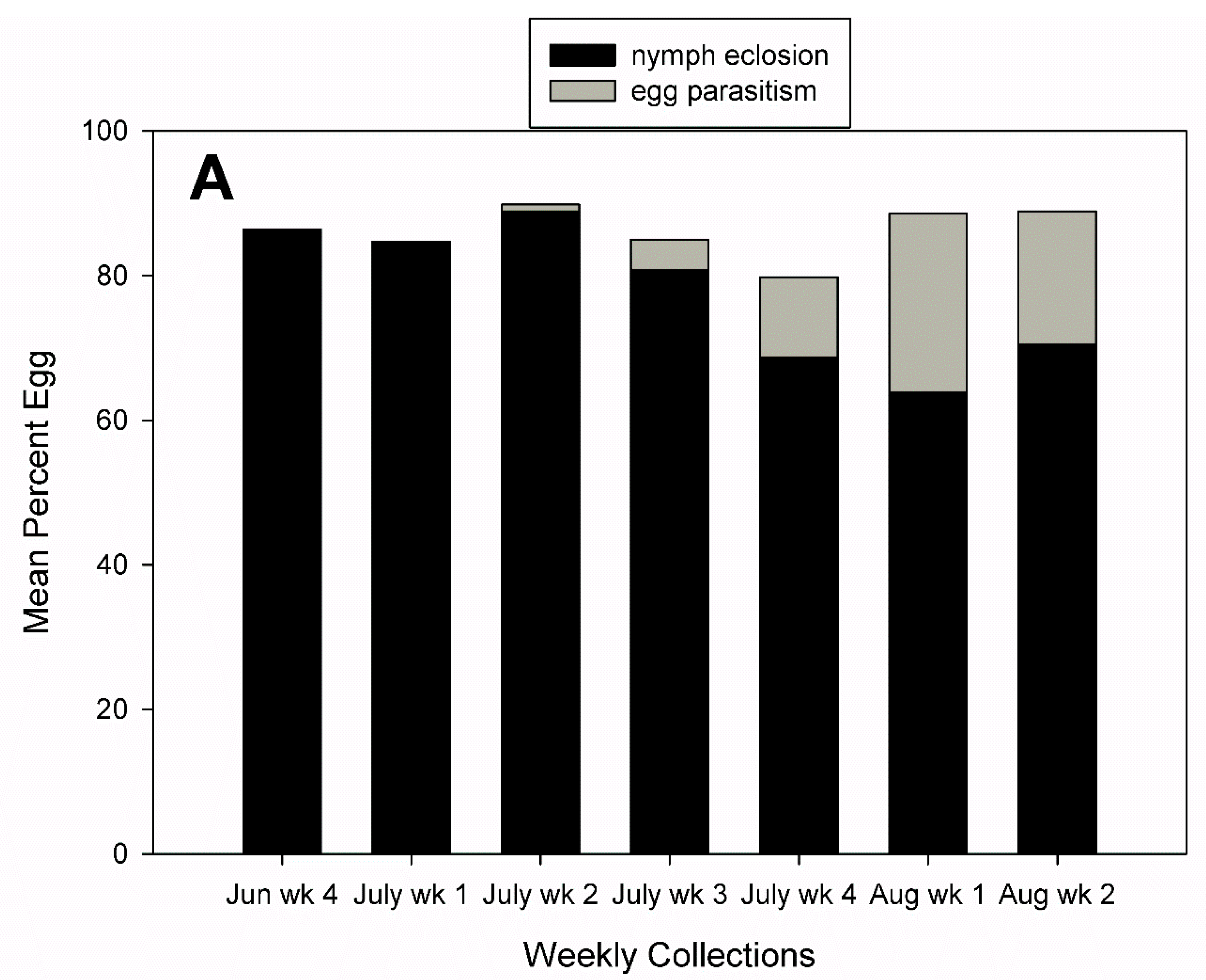 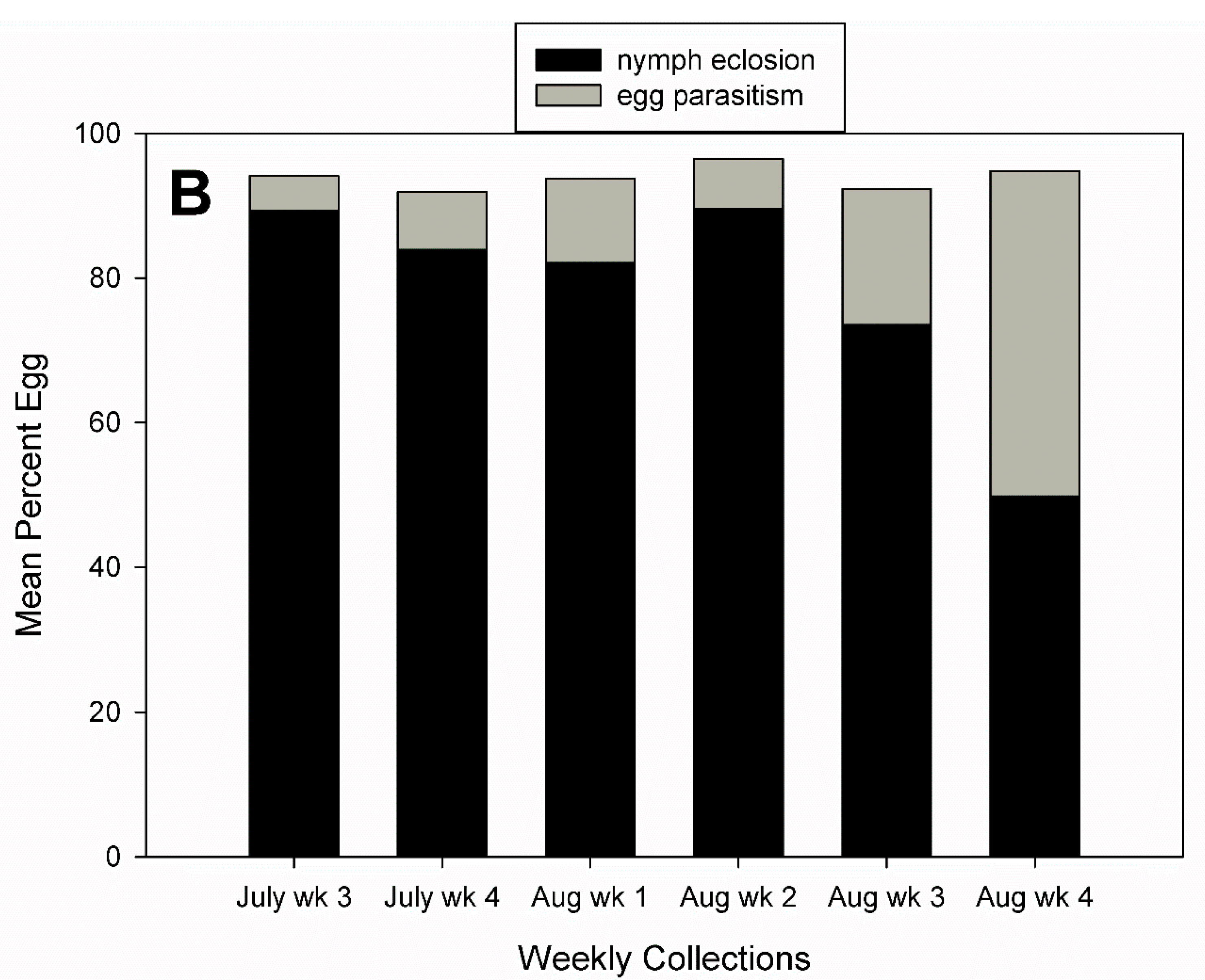