Evaluation of Monitoring Traps and Lures for Drosophila suzukii (Diptera: Drosophilidae) in Berry Plantings in Florida
Next Article in Special Issue

The spotted lanternfly, Lycorma delicatula (White) (Hemiptera: Fulgoridae), is a polyphagous pest originating in China and now widely distributed in Asian countries. This is one of the more serious forestry pests with a broad host range and causes significant economic losses. Molecular comparison has been used to investigate this pest’s origin in China, and recent studies have explored the genetic structure among populations in Korea. However, the population structure of this pest in China remains poorly understood. In this study, 13 microsatellite markers and two mitochondrial markers (from nicotinamide adenine dinucleotid (NADH) dehydrogenase subunit 2 (ND2) and NADH dehydrogenase subunit 6 (ND6) regions) were used to reveal the origins and dispersal of L. delicatula based on a genetic analysis of Chinese populations from eight locations. Results show a low to high level of genetic differentiation among populations and significant genetic differentiation between both two clusters and four clusters. The network and phylogenetic analyses for mitochondrial haplotypes and population structure analyses for microsatellite datasets suggest that there is potential gene flow between geographical populations. The populations from Zhejiang and Fujian provinces may come from the other geographical populations in north China. The populations from Beijing, Henan, and Anhui provinces were regarded as the major source of migrants with a high number of migrants leaving (the effective number of migrants (Nem) = 24.40) and the low number of migrants entering (Nem = 2.05) based on the microsatellite dataset, where significant asymmetrical effective migrants to the other populations were detected by non-overlapping 95% confidence intervals. View Full-Text
Keywords: spotted lanternfly; Hemiptera; forestry pest; population genetic structure; microsatellite; ND2; ND6 spotted lanternfly; Hemiptera; forestry pest; population genetic structure; microsatellite; ND2; ND6
►▼ Show Figures 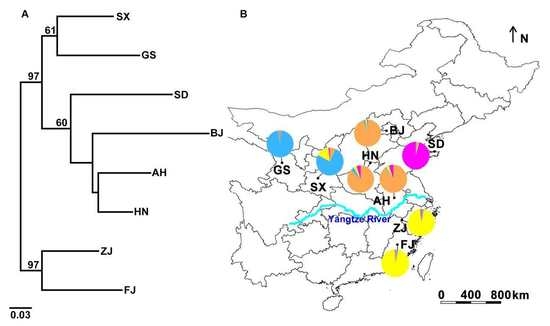