Organophosphorus compounds are commonly used as anti-wear additives in automotive and aviation lubrication systems [1,2,3]. Anti-wear additives have vital importance under extreme pressure (EP) conditions where the oil film between contacting surfaces is not sufficiently thick to prevent direct contact between the surface asperities. In such conditions, ideal additives form robust anti-wear films that adhere strongly to the surfaces and also withstand higher temperatures, particularly in aviation engines that operate at higher temperatures and higher speeds [4,5]. Phosphate esters and (metal) thiophosphate esters have been used as lubricant additives for more than 50 years in both the automotive and aviation industries. Phosphate esters, such as tricresyl phosphate (TCP), tributyl phosphate (TBP), triphenyl phosphate (TPP), etc., were initially used for aviation engines. Despite the health concerns that they pose [6,7], their use has expanded, and they are presently employed in a wide range of applications, including automotive engines [1].
Although environmental and health concerns place limitations on the amount of phosphorus in lubricants, the additives are expected to be utilized well into the future. Indeed, one common requirement for many systems is that newly developed lubricant additives must be compatible with existing phosphate esters additives, rather than outright replacing them. An appropriate strategy to limit their use levels while also retaining their function is to blend them with a synergistic and environmentally friendly additive. The overarching goal here is to add the synergistic additive without increasing the amount of phosphorus in the system until it is required to do so. This strategy would be completely practical to implement and applicable in various fields, such as aviation, automobiles, manufacturing, defense, etc., that implement a condition-based maintenance schedule [8].
Nanomaterials are emerging as environmentally friendly and effective additives for controlling friction and wear in various applications [9]. Several physical mechanisms such as change in friction mode (sliding to rolling), surface polishing/mending, reduction in cohesive forces via layered materials, etc., and chemical mechanisms, including material delivery/transfer for catalysis, tribofilm formation by tribochemical reactions, etc., have been identified as lubrication mechanisms for nanomaterials [10]. However, nanomaterials should also be able to withstand tough environments under EP conditions during boundary lubrication and the high operating temperatures of aircraft engines if they are to be successfully blended with currently used additives. This requires that nanomaterials have, among other properties, a high melting point, high hardness, and favorable chemical reactions to allow rigid bonding onto the surface, together with the anti-wear film produced by the phosphate ester [5].
Among the nanomaterials discovered and studied so far, nanodiamonds are the leading candidates from the point of view of hardness, high melting point, and the ability to withstand extreme environments. However, their impact on the performance of existing phosphate ester anti-wear additives is unknown. Several studies of nanodiamond additives have revealed their ability to improve tribological performance in various applications as well as various lubrication regimes including boundary lubrication [11,12,13]. However, their direct influence on the performance of existing additives has not been extensively studied to date. Since nanodiamonds have been reported to suppress reaction kinetics in certain systems by raising the activation energy for reactions [14], it is critically important to assess their direct effect on the reaction activities of existing anti-wear additives. Prior studies on various reaction mechanism paths through which phosphate esters form films on Fe surfaces have revealed that there is a requirement to overcome an activation energy to break either P–O or O–C bonds on the phosphate esters, depending on whether they are aliphatic or aromatic [15,16,17]. The activation energy can be attained with thermal energy, resulting in a thermal reaction film, or by other means, such as rubbing the contacts to form a tribofilm, etc. Among the various cases, the films formed are similar in chemistry, but the formation temperature varies significantly [18]. Nanodiamonds, as a proposed synergistic additive to phosphate esters, should clearly not have unfavorable effects on the reaction kinetics.
To explore this issue, we studied the effects of nanodiamonds on the formation of thermal reaction films on Fe and air baked Fe surfaces by TCP in a dibasic ester basestock. The TCP thermal reaction film formation temperatures in the presence and absence of nanodiamonds were recorded in-situ by monitoring of the reaction film formation on the surfaces using a quartz crystal microbalance (QCM) [19]. We recently reported the in-situ TCP thermal reaction film formation temperatures for Fe to be 210 °C [19]. Fe samples that were baked in air beforehand did not, however, react with TCP to form the thermal reaction film. It is therefore of interest to explore how the presence of nanodiamonds in the blend would influence whether or not thermal reaction films form on these substrates and whether the resulting reaction films, if present, are impacted by the nanodiamonds. The surface morphology, roughness, and thickness of the thermal reaction films that did form were studied with an atomic force microscope (AFM), and their chemical compositions were studied with Electron Dispersive X-ray Spectroscopy (EDS). The TCP-derived films were regarded as anti-wear films, rather than materials having the property of decreasing the coefficient of friction. Since the QCMs are fragile, the thermal reaction films formed on the QCM substrates could not withstand the rigorous tribo-testing procedure that is regularly performed for such anti-wear films. We, therefore, as a simple gauge, employed a basic friction measurement approach to provide information on the coefficient of sliding friction at the dry solid–solid contact between the thermal reaction films and the stainless-steel balls. The contact angles between the thermal reaction films and the base oil were measured to examine any changes in the solid–liquid wetting property of the surfaces after the TCP uptake. Change in contact angles are associated with changes in the physical and chemical properties of the surfaces after formation of the thermal reaction films. In particular, it is important to identify changes in the slip condition at the QCM’s solid–liquid interface [20].

This research was funded by the US National Science Foundation grant number DMR1535082.

We acknowledge Donald W. Brenner for project direction under the funding support DMR1535082. We are thankful to Adamas Nanotechnologies for providing the nanodiamond sample. This work was performed, in part, at the Analytical Instrumentation Facility (AIF) at North Carolina State University, which is supported by the State of North Carolina and the National Science Foundation (award number ECCS-1542015). The AIF is a member of the North Carolina Research Triangle Nanotechnology Network (RTNN), a site in the National Nanotechnology Coordinated Infrastructure (NNCI). 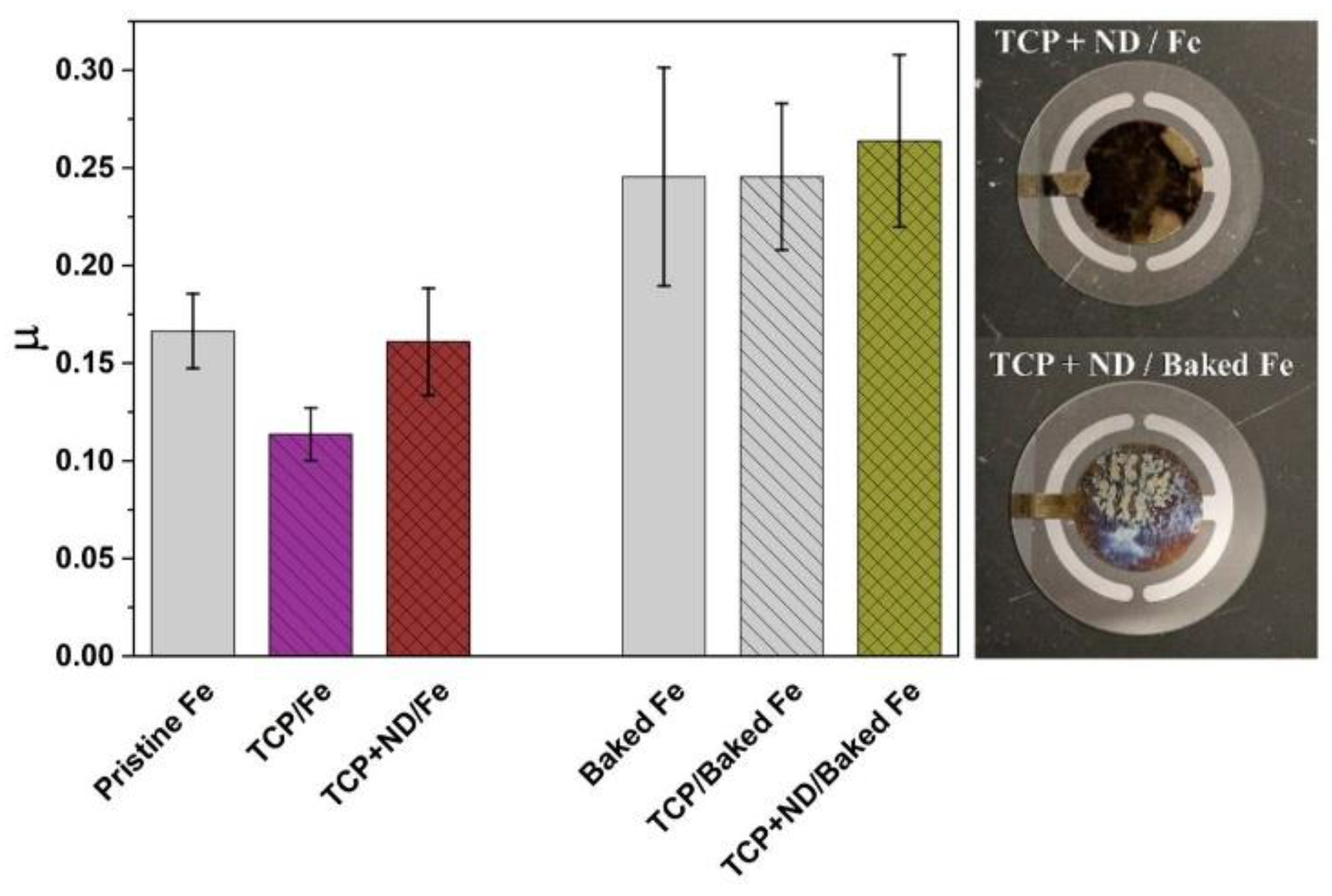