Lubricating grease, consisting of a thickener dispersed in mineral or synthetic oil, is usually used in gears, bearings, and other mechanical moving parts [1], where it acts as a lubricant and sealing agent. Due to its semisolid character, grease posseses the advantages of both oil and solid lubricant. However, the nature and rheological properties of greases are essentially different from those of oil and solid lubricant. In lubricating grease, an entanglement network formed by the thickener traps the oil and confers the appropriate rheological property to the grease [2]. Under certain loading conditions, the grease usually maintains its solid form and does not flow. However, when the load reaches the grease’s “critical stress”, it begins to flow like a lubricating oil [3]. Studying the rheological properties of lubricating greases is important not only under working conditions but also under static conditions. This is because the rheological properties of lubricating greases are responsible for preventing a loss of lubrication [4].
Recently, ionic liquids (ILs) have been shown to exhibit immense potential for lubricant applications because of their reduced volatility, nonflammability, and thermal stability [5]. Several papers have been published on the use of different types of ILs as lubricants, lubricant additives, or base oils to prepare lubricating grease [6,7,8,9,10,11]. However, from the aspect of engine applications, using a small amount of ILs as an additive seems to be an economical option due to the high cost of ILs [12]. Over the last few years, the corrosion and low miscibility of ILs in non-polar oils restrict their application as additives for most base oils. Recently, some kinds of high miscibility and noncorrosive ILs, such as phosphonium-based ILs, were developed. Qu et al. first investigated the oil–miscible ionic liquid (trihexyltetradecylphosphoniumbis(2-ethylhexyl) phosphate) as a potential antiwear lubricant additive. In a synthetic base oil, this ionic liquid demonstrated superior antiscuffing and antiwear properties [13]. Westerholt et al. developed an economic halide-free route to synthesize oil–miscible ammonium- and phosphonium-based ionic liquids. The prepared ionic liquids showed remarkable tribological performance as a base oil or an additive [14]. Up to now, little work has been carried out on using phosphonium-based ILs as grease additives. ILs have been proved to be effective additives in greases [15,16]. However, the ILs were usually added to the greases after the greases were already prepared. This method can cause the grease system to be instable. Therefore, our group considered mixing a certain amount of oil-miscible IL in base oil and using the oil–IL blends to prepare lubricating grease. In this process, the oil–miscible ILs were not physically mixed with the grease but participated in saponification. The ILs were trapped in the entanglement network formed by the thickener.
In this paper, we synthesized and characterized phosphonium-based ILs with different anions and cations and dissolved 5 wt % ILs in Poly Alpha Olefin 10 (PAO 10) base oil. Then, the oil–IL blends were used as base stock to prepare lithium greases. The physical and rheological properties of the lithium greases were investigated. The tribological performances of the lubricating greases were determined in the form of friction coefficient and wear volume on a four-ball friction tester.

2.1. Synthesis and Characterization of the Ionic Liquids

Trioctyltetradecylphosphoniumbis(2-ethylhexyl) phosphate ([P88814][DEHP]), trioctyl(3′-O,O′-diethylphosphinylpropyl)phosphonium bis(2-ethylhexyl) phosphate ([P888p][DEHP]), and trioctyltetradecylphosphonium 1,4-bis(2-ethylhexyl) sulfosuccinate ([P88814][AOT]) are synthesized in this work. Their structures are shown in Figure 1.
[P88814][DEHP] and [P88814][AOT] were synthesized mainly according to the literature reported by Qu and co-workers [13]. The first step is to synthesize [P88814]Br by stirring a mixture of trioctylphosphine and 1-bromotetradecane at 140 °C under nitrogen for 24 h. The [P88810]Bris then desolved in hexane and the bromine anion is exchanged by bis(2-ethylhexyl) phosphate in the presence of NaOH ([P88814][DEHP]) or the sodium 1,4-bis(2-ethylhexyl) sulfosuccinate ([P88814][AOT]). In order to synthesize [P888p][DEHP], 3′-O,O′-diethylphosphinylpropyl was initially synthesized by mixing triethyl phosphite and 1,3-dibromopropane with a molar ratio of 2:1 in solvent methylbenzene at 130 °C for 8 h. Then, middle distillates were collected under vacuum distillation [17]. The cation precursor [P888p]Br was prepared by mixing trioctylphosphine and 3′-O,O′-diethylphosphinylpropyl at 140 °C for 48 h. In a subsequent step, the bromine anion is exchanged by bis(2-ethylhexyl) phosphate in the presence of NaOH.
Thermogravimetric analysis (TGA) was used to characterize the thermal stabilities of the ILs at a 10 °C/min heating rate in air from room temperature to 600 °C. Figure 2 shows the TGA curves of the ionic liquids. The onset decomposition temperatures of the ionic liquids were determined by the intersection of the tangent and the baseline at the maximum slope of the TGA curves. The kinematic viscosities of ILs were measured at 40 and 100 °C. The typical physical properties of the synthesized ILs are presented in Table 1.

2.2. Preparation of the Lithium Greases

The ILs were added into PAO10 with the mass ratio of 5 wt % and then fully stirred until the ILs were completely dissolved in PAO 10. The formed oil–IL blends were transparent and homogeneous. The lithium greases were prepared following the patent CN103146466A. A certain amount of 12-hydroxystearic acid and sebacic acid was added to a 40 wt % oil–IL blend heated to 110 °C. When the two fatty acids completely dissolved, the lithium hydroxide aqueous solution was added to conduct a saponification reaction. Then, the mixture was heated to 150 °C to evaporate the water. When the dehydration was complete, the mixture was heated to 210 °C and kept at this temperature for 10 min. Finally, the mixture was cooled to room temperature. Lithium grease was obtained by grinding the mixture on a three-roller mill three times.

2.3. Characterization of the Lithium Greases

The dropping points of the lithium greases were measured using a BF-22 dropping point tester (North Dallan Analytical Instrument Company, Dalian, China). The penetrations were measured using a SYP4100 lubricating grease cone penetrometer (Shanghai Yangde Petroleum Instrument, Shanghai, China). Copper strip tests were carried out to evaluate the corrosion properties of the lithium greases according to the standard GB/T7326-87 method.
The rheological properties of the lithium greases were probed in a controlled-stress rheometryrheoscope using a plate-plate geometry (30 mm diameter, 1mm gap). Small amplitude oscillatory shear (SAOS) measurements (ThermoHaake, Karlsruhe, Germany), inside the linear viscoelasticity region, were performed in a frequency range between 0.1 and 100 rad/s at 25 °C. The linear viscoelasticity region of each sample was determined by a stress sweep test at a frequency of 1 Hz.
The lubrication properties of the lithium greases were evaluated on a four-ball tribotester (Jinan Yihua Tribology Testing Technology Company, Jinan, China). All of the tribotests were conducted at 75 °C under a normal load of 392 N (3.42 GPa hertzianpressure) and a rotating speed of 1450 rpm for 1 h. The tribological tests were repeated two times for all lubricating greases. The friction coefficients were recorded automatically by a computer linked to the four-ball tester. The wear scar diameters of the lower balls were measured by an optical microscope (Shanghai Optical Instrument Factory, Shanghai, China) with an accuracy of ± 0.01 mm. The wear volumes of the balls were measured using a MicroXAM-3D surface mapping microscope profilometer (KLA-Tencor, Milpitas, CA, USA). The maximum non-seizure loads (PB values) tests of the lithium greases were conducted according to Chinese national standard GBT 3142-1982. The measurement conditions were room temperature, 1450 rpm, and 10 s.
A JEM-5600LV scanning electron microscope (SEM, JEOL, Tokyo, Japan) was used to examine the morphology of the worn surfaces on the balls. Energy-dispersive X-ray spectroscopy (EDS, JEOL) and PHI-5702 muti-functional X-ray photoelectron spectroscopy (XPS, Physical Electronics, Chanhassen, MN, USA) were used to study the composition of the surface film.

3.1. Physical Properties of the Lithium Greases

The physical properties of the lithium greases are presented in Table 2. Among the prepared greases, the [P88814][DEHP] grease showed a higher dropping point than the PAO 10 grease, and the [P888p][DEHP] grease and the [P88814][AOT] grease showed a lower dropping point than the PAO 10 grease, indicating that the cation and anion structures of the ILs have effects on the lubricating greases’ colloidal structures. From Table 2, it is found that, similar to the PAO 10 grease, the lithium greases prepared using oil–IL blends are also noncorrosive to copper.

SAOS measurements were used to investigate the influences of ionic liquids on the microstructural network of the greases. Figure 3 shows the evolution of the storage (G′) and loss (Gʺ) modulus and loss tangent (tanδ = Gʺ/G′) with frequency, within the linear viscoelasticity range at 25 °C. As can be observed in Figure 3a, G′ is higher than Gʺ over the whole frequency range. Nevertheless, the G′ and Gʺ of PAO10 grease is higher than those of the [P88814][DEHP] and [P88814][AOT] greases but similar to the [P888p][DEHP] grease. These results indicated that the addition of [P88814][DEHP] and [P88814][AOT] brought about deterioration of the grease′s microstructural network stability, but the addition of [P888p][DEHP] had little impact on the microstructural network stability. Besides this, the addition of ILs not only affected the values of G′ and Gʺ but also the loss tangent. As is shown in Figure 3b, the addition of [P888p][DEHP] and [P88814][AOT] caused an increase in the relative elastic characteristics of the lubricating grease. However, the addition of [P88814][DEHP] caused the relative elastic characteristics of the lubricating grease to decrease [1].

The tribological performances in terms of friction and wear behavior of the lubricating greases are shown in Figure 4. It is seen that the PAO 10 lubricating grease exhibits a high and unstable friction coefficient and the wear scar diameter is about 0.76 mm. However, after the addition of [P88814][DEHP] and [P888p][DEHP], the friction coefficient decreased to about 0.05 and stayed stable during the whole sliding process. The wear scar diameter, especially the wear volume, also significantly decreased. Compared with the traditional extreme pressure antiwear additive zincdialkyldithiophosphate (ZDDP), the [P88814][DEHP] and [P888p][DEHP] greases exhibited a lower friction coefficient and wear volume. The addition of [P88814][AOT]improved the friction-reduction and antiwear performance of the lubricating grease. Compared with ZDDP, the friction coefficient of [P88814][AOT]is similar to that of ZDDP. However, the wear scar diameter and wear volume of [P88814][AOT] are larger than those of ZDDP.
Figure 5 shows the PB values of the lubricating greases. As is shown in Figure 4, after the addition of phosphonium-based ILs, the PB values were significantly improved and the PB values were larger than those of ZDDP, indicating that the ILs exhibited good extreme pressure performances.

Three phosphonium ILs, [P88814][DEHP], [P888p][DEHP], and [P88814][AOT], were synthesized and their decomposition temperatures, densities, and kinematic viscosities were then characterized. The ILs were dissolved in PAO 10 at a concentration of 5 wt % to form oil–IL blends. The oil–IL blends were used as base stock to prepare lithium greases. The effects of ILs on the physical, rheological, and tribological properties of lithium lubricating grease were investigated. The results are as follows:

(1)
The [P88814][DEHP] grease showed a higher dropping point than the PAO 10 grease, and the dropping point of the [P888p][DEHP] grease and the [P88814][AOT] grease is lower than that of the PAO 10 grease. All of the lubricating greases are noncorrosive to copper.
(2)
Compared with the PAO 10 grease, the values of the linear viscoelasticity modulus of the [P88814][DEHP] and [P88814][AOT] greases decreased. However, the same values of the linear viscoelastic functions were found for the [P888p][DEHP] grease.
(3)
The ILs were found to be effective lubricant additives for improving the friction-reducing and antiwear properties and the maximum non-seizure load (PB values) of PAO 10 lithium lubricating grease. A surface analysis showed that a tribochemical film was generated from the ILs to reduce friction and wear. 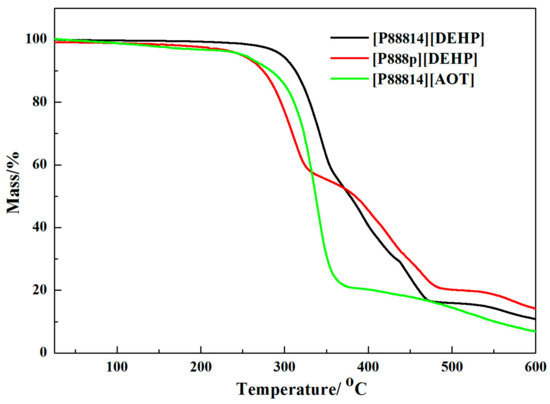 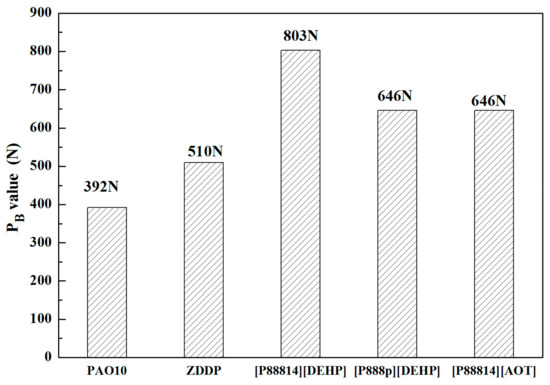 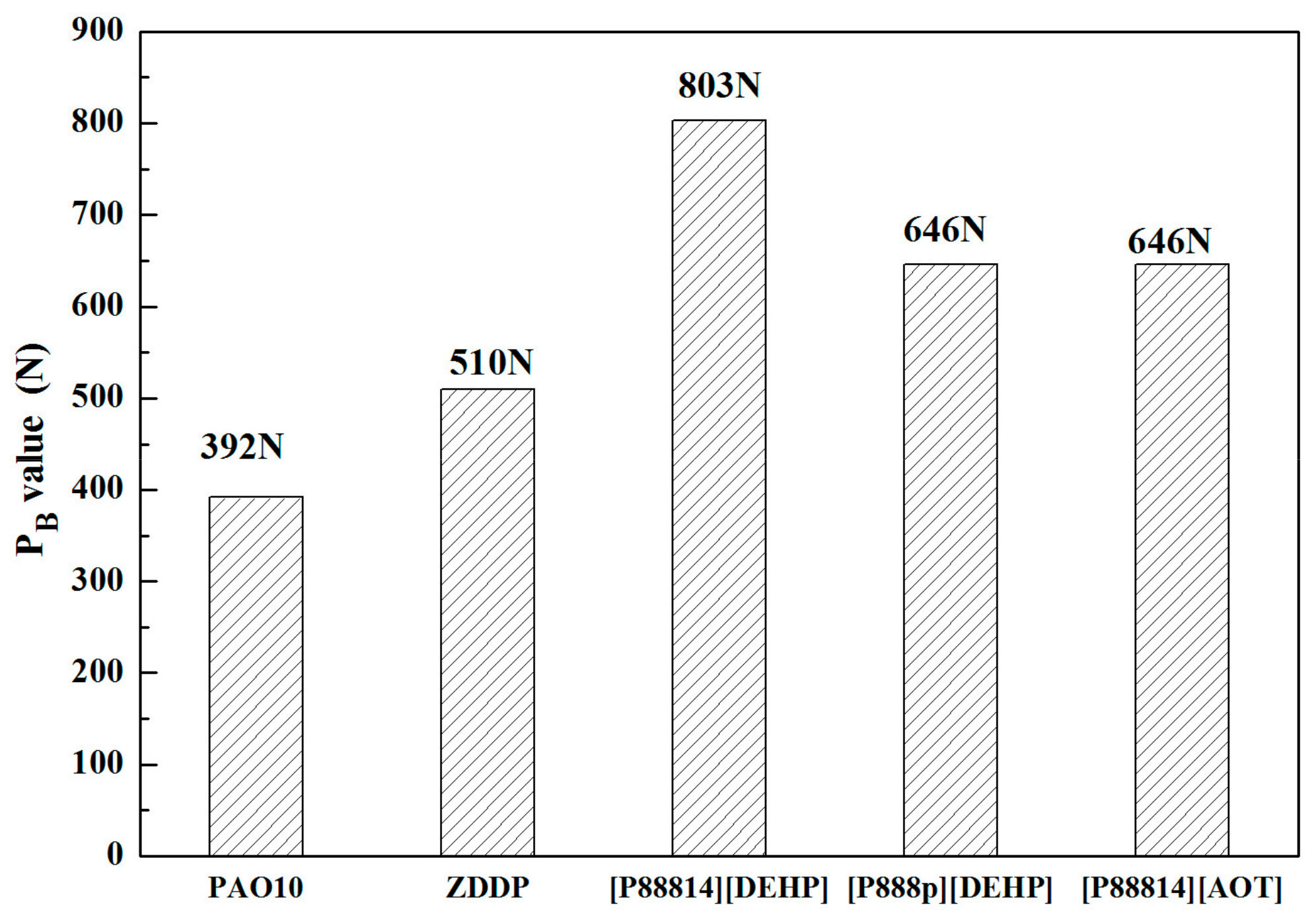 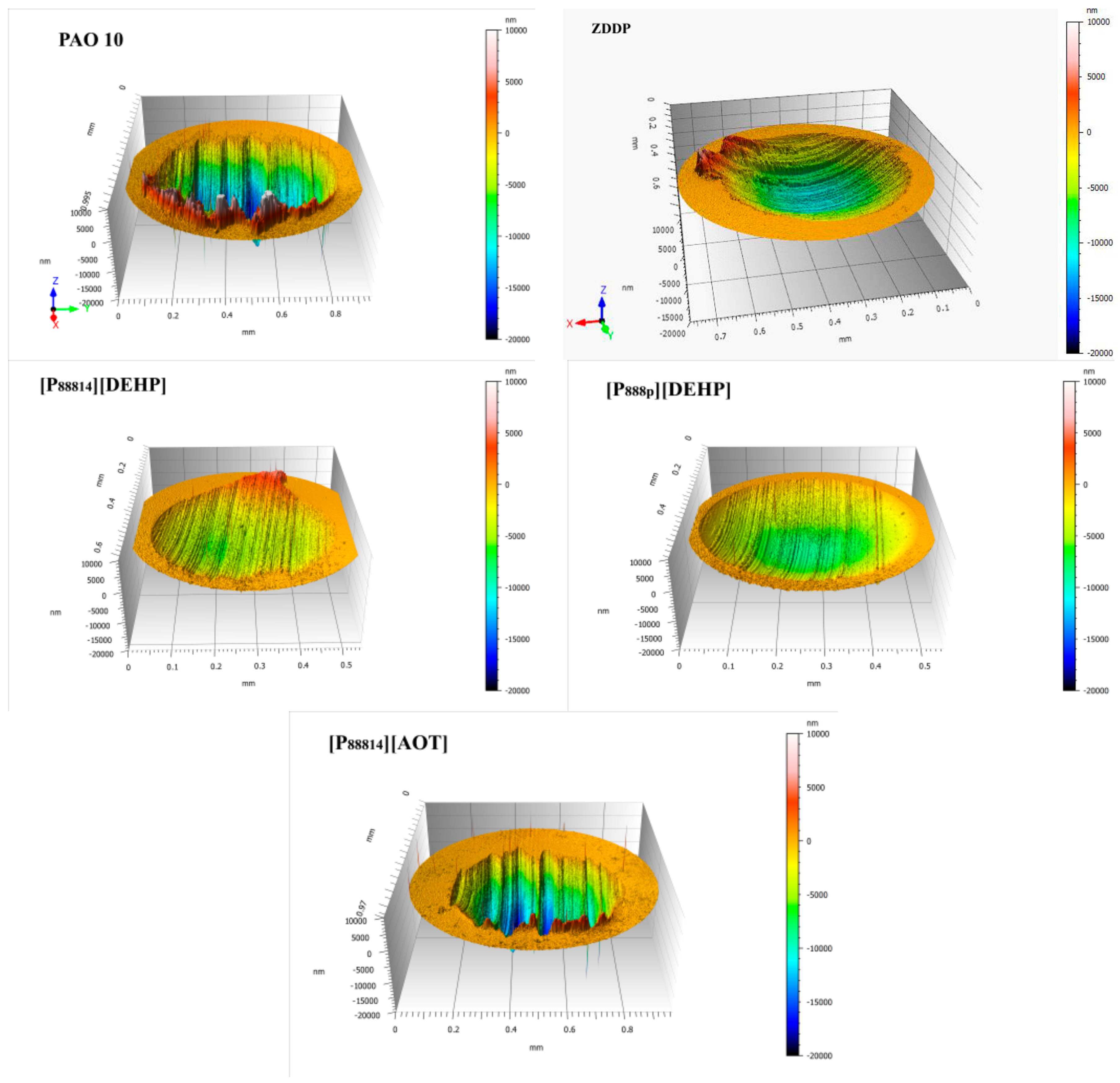 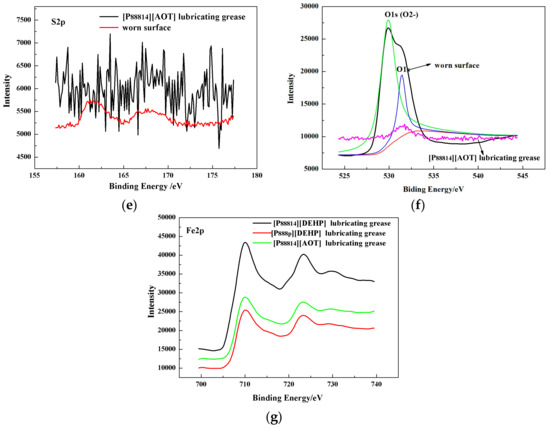