Tribological Behavior of HNBR in Oil and Gas Field Applications†

The common usages of elastomeric components in oil and gas field applications are in dynamic atmospheres; especially sealing appliances that are in relative motion when interacting with surfaces. Therefore, their performance and service life mainly depend on the wear and friction characteristics in use. The objective of this scientific work is to identify the effect of swelling-induced ageing on the tribological properties and surface damage mechanisms of hydrogenated nitrile butadiene rubber (HNBR) in contact with different liquids. Furthermore, the investigation of the co-relation between mechanical properties and surface properties in the tested conditions is indispensable. In the swollen state, deteriorated mechanical properties were observed; however, in de-swollen conditions, the mechanical properties were restored. As far as the surface characterization is concerned, when the HNBR was swollen by a standard IRM 903 solvent, its wear was greater compared with the un-swollen specimen (1.1 times) despite the lower coefficient of friction (COF) (reduced by ~25%) and surface temperature (reduced by ~2.4 °C). In the de-swollen condition, wear was even greater (6 times), but the COF and surface temperature were situated in between those recorded in the swollen and un-swollen conditions. With swelling, greater wear damage and lower COF were observed; higher surface ageing (softness), which eases crack growth, created bigger debris. Under the conditions used, in the de-swollen states, the bulk mechanical properties were almost recovered, in contrast to the surface properties, which were still significantly impaired. View Full-Text
Keywords: elastomeric materials; HNBR; swelling-induced ageing; mechanical and tribological characterization; surface analysis elastomeric materials; HNBR; swelling-induced ageing; mechanical and tribological characterization; surface analysis
►▼ Show Figures 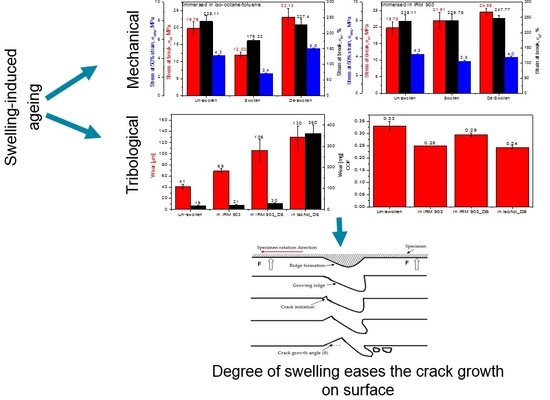