Features of Secular Changes in the Flux Density of the Cas a Supernova Remnant, from Centimeter to Decameter Wavelengths

The purpose of this work is to summarize a large amount of observational data about the secular decrease of Cas A flux in the radio range, as an indicator of physical processes both in the source itself and as a consequence of the influence of the propagation medium. This paper presents results of observations Cas A and Cyg A on radio telescopes of International Radio Astronomy Center (Latvia), and URAN-4 phased array antenna (Institute of Radio Astronomy NAS of Ukraine). According to URAN-4 observations, there were seasonal–diurnal changes in Cas A/Cyg A flux ratios due to the effects of solar activity on the ionosphere, and there may be no secular decrease in Cas A flux density, or a weak tendency to decrease it. The significant influence of the ionosphere makes it difficult to use Cyg A as a reference source in the decameter radio range. In the centimeter radio range, there were episodic intra-day variations at the level 8–10% of Cas A averaged flux. Additionally, in the period January–February 2021, Cas A flux was about 1.7 times that of Cyg A. Taking into account the observed complex type of secular decrease in Cas A flux against the background of changes in space weather variations, further observations of Cas A were planned at radio observatories in Latvia and Ukraine. View Full-Text
Keywords: secular radio flux decrease; Cassiopeia A; supernova remnant secular radio flux decrease; Cassiopeia A; supernova remnant
►▼ Show Figures 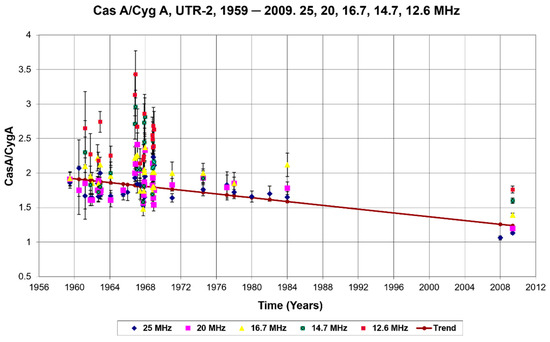