Black hole X-ray binary systems consisting of either a high-mass X-ray binaries (HMXB) such as “Cyg X-1” or a low-mass X-ray binaries (LMXB) such as “GX339-4” show two quasi-steady X-ray spectral states—hard state and soft state—and state transitions between them. X-ray satellites and other instruments have revealed the hidden nature of X-ray binaries, such as existence of the intermediate state, jet ejections and quasi-periodic oscillations [1]. Theoretically, accretion flows in the hard state are explained by optically thin high-temperature accretion flows, “advection-dominated accretion flows (ADAFs)” [2,3]. On the other hand, the soft state is explained by the optically thick cool accretion disks, “Shakura Sunyaev disks (SSDs)” [4]. To understand the structural change of accretion flows during state transitions; however, two-dimensional or three-dimensional numerical studies are necessary.
Hard-to-soft state changes has been studied by Machida et al. by performing three-dimensional MHD simulations considering radiative cooling by bremsstrahlung [5]. They found that the magnetically supported mildly cool accretion disk is formed during the vertical contraction of the disk driven by the loss of internal energy due to radiative cooling.
Recently hydrodynamical (HD) simulations have been performed using the alpha viscosity. Das and Sharma carried out two-dimensional HD simulations taking into account bremsstrahlung and isotropic thermal conduction [6]. By changing the accretion rate, they reproduced transitions from hard state to soft state and vice versa. Wu et al. carried out two-dimensional HD simulations including synchrotron and inverse-Compton scattering in addition to thermal bremsstrahlung [7]. Moreover, they studied two-temperature structures of accretion flow, although they assume a simple equation of ion and electron temperatures. Based on their numerical results, they proposed two-phase accretion model for the intermediate state of black hole X-ray binaries. HD simulations with alpha viscosity, however, cannot simulate the formation of low beta () disks. Magnetohydrodynamical approach is preferable, because the origin of viscosity in accretion disk is believed to be the angular momentum transport driven by the magneto-rotational instability [8,9].
Thermal conduction is regarded as important in solar astronomy. Yokoyama and Shibata performed MHD simulations to investigate solar flares by including anisotropic thermal conduction [10,11,12]. The heat released by magnetic reconnection above the chromosphere is transported downward to the chromosphere along the magnetic field line and evaporates them. Protostellar flares are also studied taking into account thermal conduction [13]. Meyer and Meyer-Hofmeister and their collaborators intensively studied the role of thermal conduction in accretion disk system, such as dwarf novae and black hole accretion systems from stellar size to the size of active galactic nuclei [14,15]. Once we consider the coexistence of hot corona and cool accretion disk, inevitably evaporation occurs. We must include the effect of thermal conduction, when we study the accretion disk surrounded by hot corona.
We perform two-dimensional MHD simulations including thermal conduction to study the transition from hard state to soft state, in other words, to vertical contraction of the hot accretion flow by extracting the energy by radiative cooling. Our purpose is to study the effect of thermal conduction for the coexistence of hot and cool region. In Section 2 we introduce the basic equations and initial and boundary conditions. In Section 3 we present numerical results. In Section 4 we discuss and compare the results with previous works.

We adopt the cylindrical coordinate .The rotational axis is axis. We assume axisymmetry, therefore partial derivatives in the azimuthal direction are set equal to zero. We use the “Coordinated Astronomical Numerical Software (CANS)” to solve the equations of resistive MHD including thermal conduction [16]. The CANS integrates differential equations by the operator-splitting method dividing calculations into the MHD part and thermal conduction part [12]. We adopt the modified Lax-Wendroff method with artificial viscosity for the MHD part. For thermal conduction part, we choose the Biconjugate gradient stabilized method (Bi-CGSTAB method) which is an implicit method to solve the large, sparse, unsymmetrical and linear systems of equations [17,18]. The implicit method is necessary to calculate our model because the time scale of thermal conduction is much shorter than one of the other time scales in high-temperature regions.

The initial state is a torus surrounded by low-density halo. The initial gas halo is assumed to be isothermal and non-rotating in hydrostatic equilibrium. The density of the halo is written as follows: where is the potential at , is the halo density at , is the uniform halo temperature, is the temperature of initial torus at .
Initial gas torus which is embedded in the halo satisfy the polytropic relation , being constant, being polytropic index [6,7]. We assume that the gas torus has the constant angular momentum. Moreover, it is in dynamical equilibrium. From the conditions of rotational equilibrium, we obtain where is the distortion parameter [23]. We employ . The torus has the maximum density at . We obtain by substituting above values into the Equation (13).
Initial magnetic field is obtained according to the following manner. At first, we assume the azimuthal component of vector potential is proportional to the torus density., being constant. Therefore, magnetic field is calculated as, and . Next, we rearrange the strength of magnetic field to satisfy plasma beta in the torus.

We take a rectangular computation domain in the - plane. The region is and , where , , and . We assume that is the rotational axis. A logarithmic grid spacing is adopted along the both and directions. Here grids are used. At the cell-surface boundary at between grids which are next to each other across the rotational axis, symmetric-boundary conditions are imposed. For , , and , we do not change signs at the boundary. On the other hand, for , , and , we change signs at the boundary. At the boundaries at , and , free-boundary conditions are imposed. Physical quantities are extrapolated from the values inside the boundary. We impose damping condition in the shell, , as where is the original value, is the value modified by the damping treatment, is the initial value at , is the coefficient of damping which depends on the distance from the origin, is the inner radius of the shell, is the outer radius of the shell.

We carried out numerical simulations of two models. One is for a model which does not include thermal conduction (Model 1). The other is for a model which includes thermal conduction (Model 2). To include the heating by dissipation of magnetic energy, we carry out simulations without including radiative cooling until . At , we incorporate radiative cooling in both cases. The variables are normalized by the units shown in Table 1 in calculations. Results also are shown in the units of Table 1.

This research was funded by JSPS KAKENHI, grant number 16H03954.

We thank the anonymous reviewers, Takaaki Yokoyama and Hiroki Yatabe for their helpful comments. 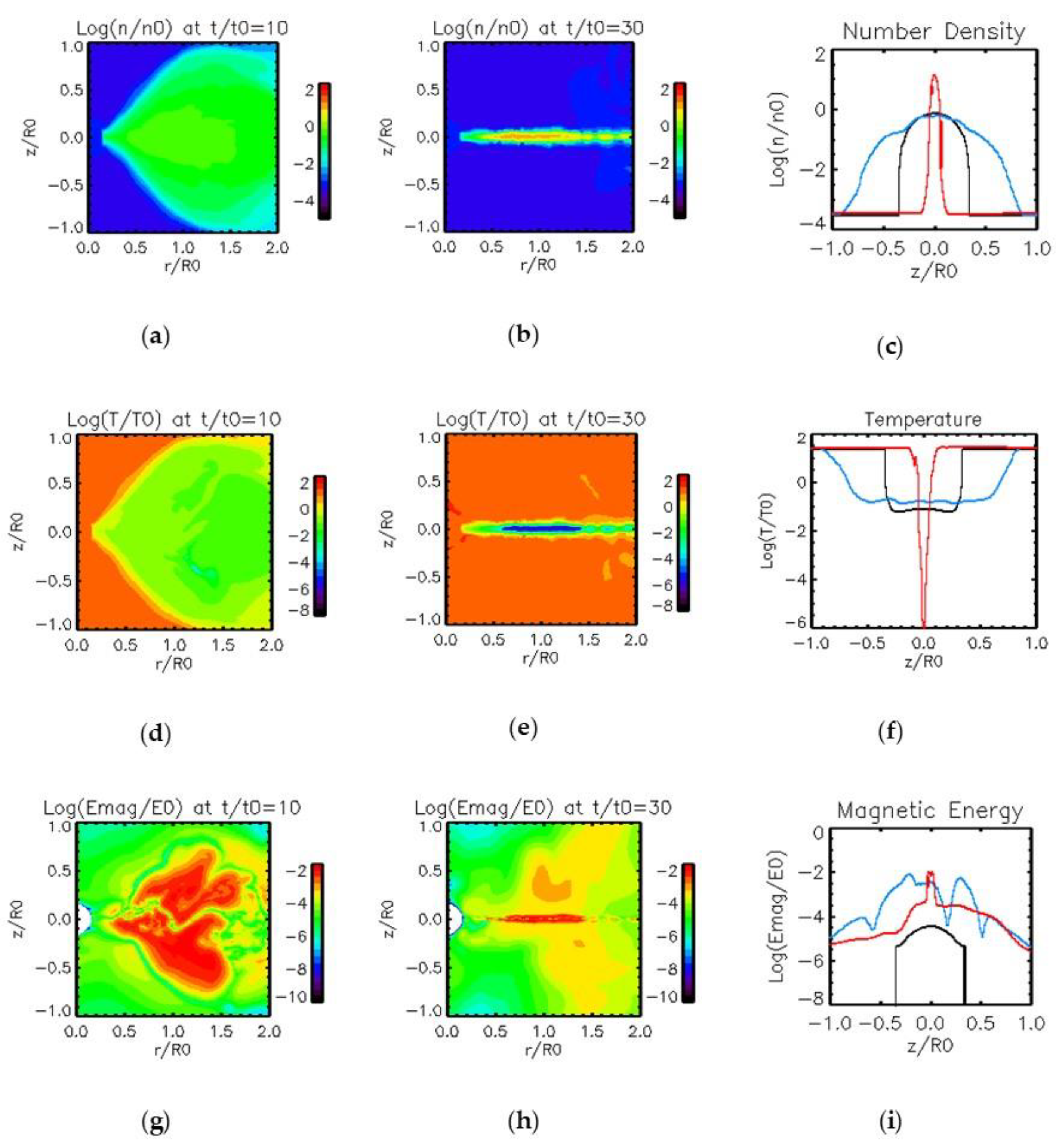 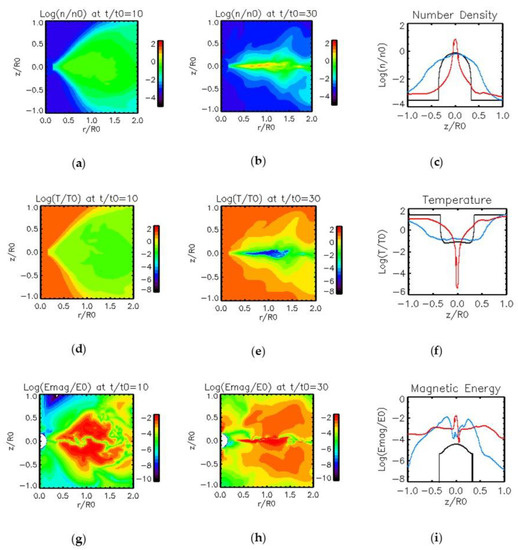 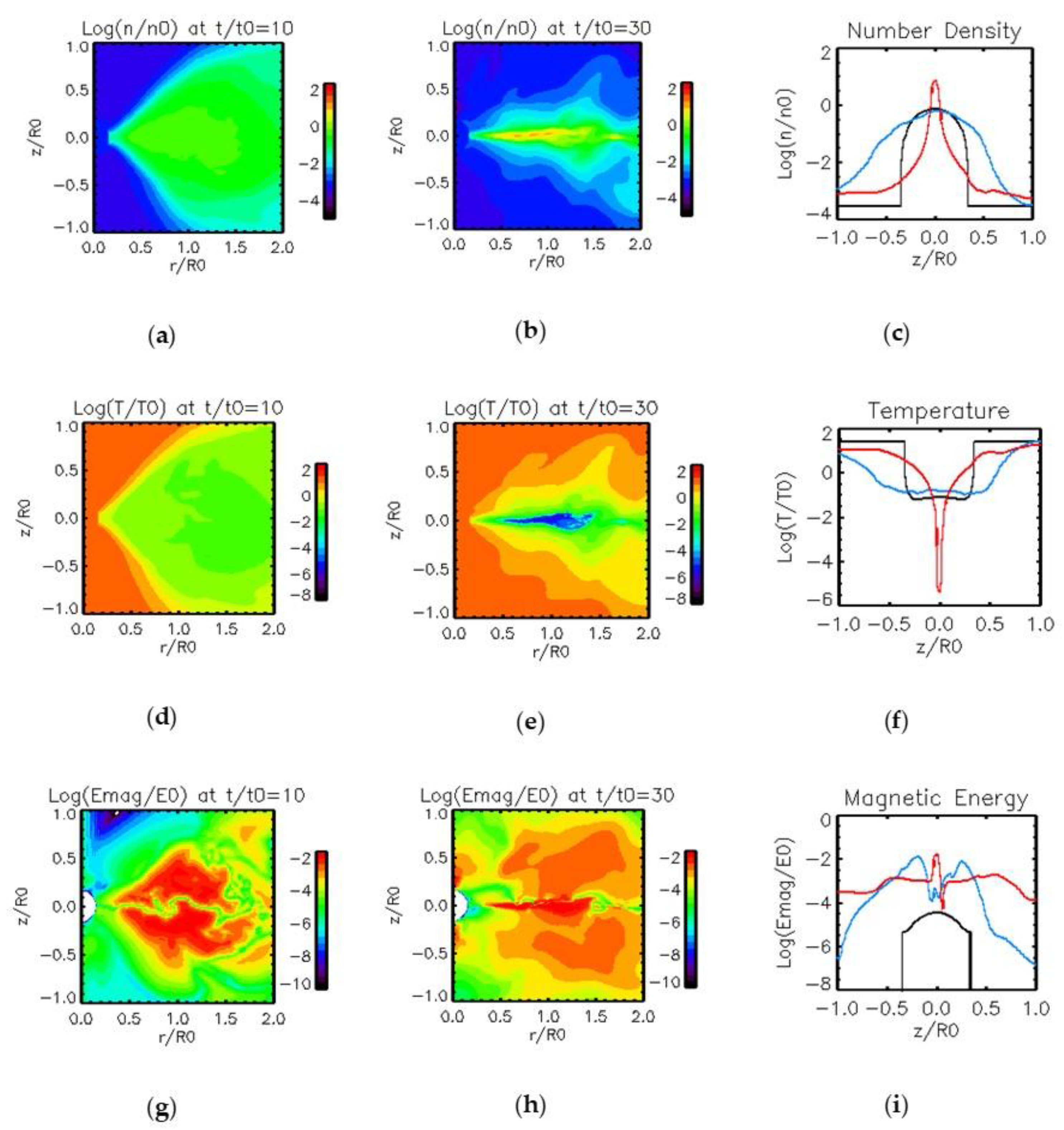 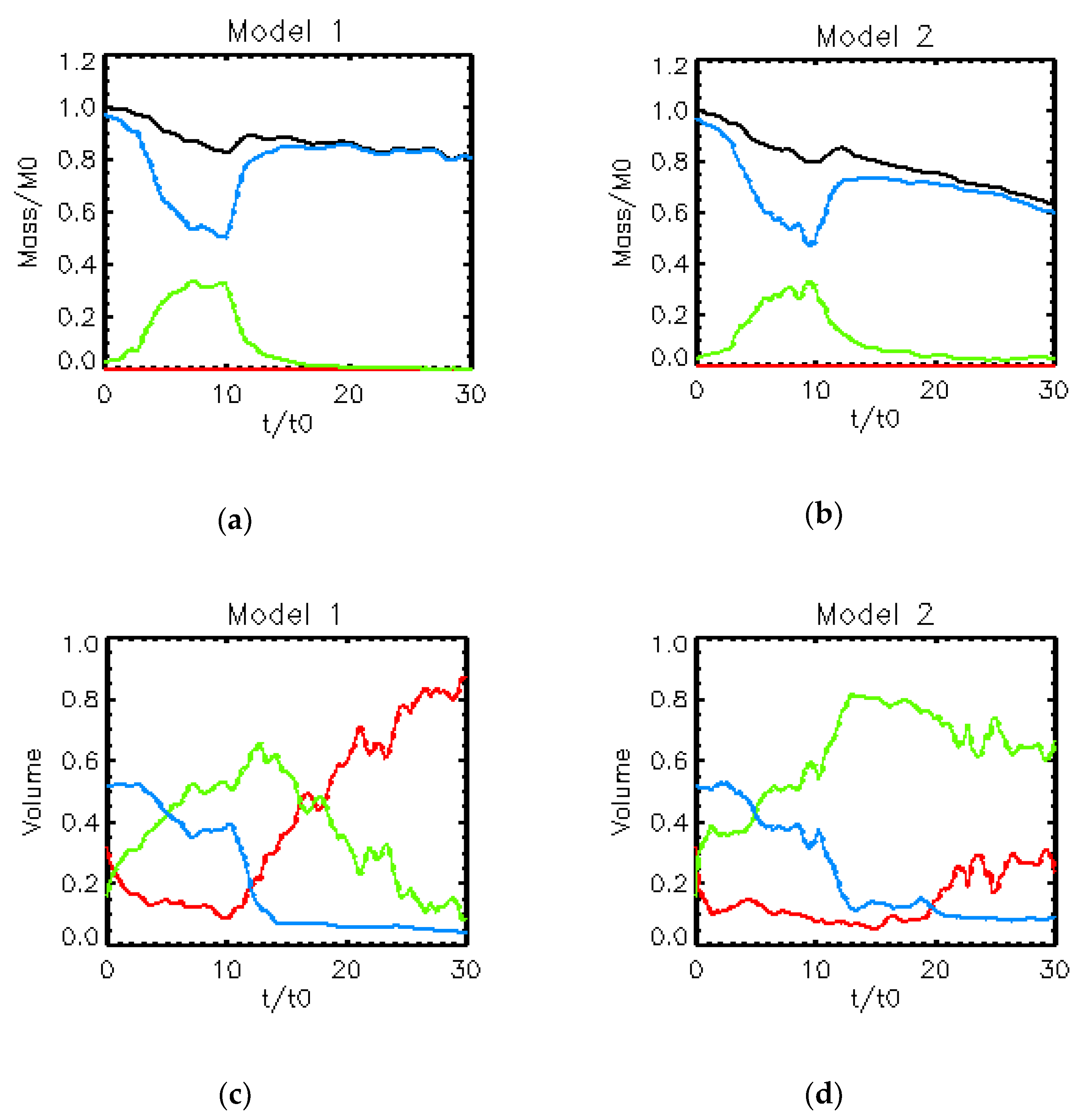