The University of Michigan Centimeter-Band All Stokes Blazar Monitoring Program: Single-Dish Polarimetry as a Probe of Parsec-Scale Magnetic Fields

The University of Michigan 26-m paraboloid was dedicated to obtaining linear polarization and total flux density observations of blazars from the mid-1960s until June 2012, providing an unprecedented record tracking centimeter-band variability over decades at 14.5, 8.0, and 4.8 GHz for both targeted objects and members of flux-limited samples. In the mid-1970s through the mid-1980s, and during the last decade of the program, observations were additionally obtained of circular polarization for a small sample of radio-bright (S > 5 Jy), active sources. Key program results include evidence supporting class-dependent differences in the magnetic field geometry of BL Lac and QSO jets, identification of linear polarization changes temporally associated with flux outbursts supporting a shock-in-jet scenario, and determination of the spectral evolution of the Stokes V amplitude and polarity for testing proposed models. Recent radiative transfer modeling during large flares supports a jet scenario with a kinetically-dominated, relativistic flow at parsec scales with embedded turbulent magnetic fields and dynamically-weak ordered components which may be helical; the circular polarization observations are consistent with linear-to-circular mode conversion within this turbulent jet environment. View Full-Text
Keywords: blazars; linear polarization; centimeter-band; magnetic fields blazars; linear polarization; centimeter-band; magnetic fields
►▼ Show Figures 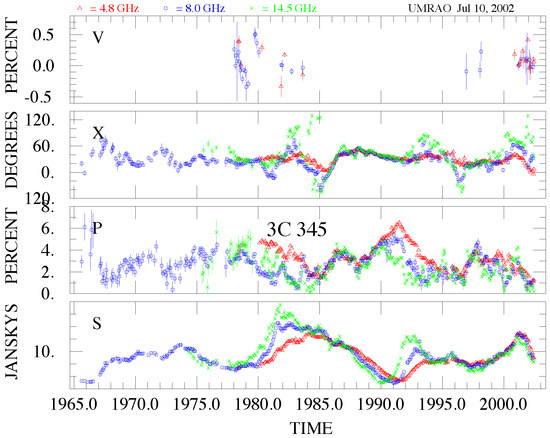