This paper reviews observational evidence obtained to date about the overall structure of the magnetic ﬁelds in the jets of Active Galactic Nuclei (AGN). Because they are sensitive to the line-of-sight magnetic-ﬁeld component, Faraday rotation observations of AGN jets provide an effective tool for searching for toroidal jet magnetic ﬁelds, whose line-of-sight component changes systematically across the jet. Transverse Faraday rotation measure (RM) gradients providing direct evidence for helical/toroidal magnetic ﬁelds have been reliably detected in nearly 40 AGN on parsec scales. Helical magnetic ﬁelds are believed to form due to the combined action of the rotation of the central black hole and accretion disk, and these observations demonstrate that at least some of this helical ﬁeld survives to distances well beyond the Very Long Baseline Interferometry (VLBI) core. Observations of reversals in the direction of the transverse RM gradients in a number of AGN provide evidence for a“return”magnetic ﬁeld forming a nested helical-ﬁeld structure with oppositely directed azimuthal components in the inner and outer regions of the helical magnetic ﬁeld. The collected data now provide ﬁrm evidence for a predominance of inward jet currents on parsec scales and outward currents on scales greater than a few tens of parsecs. This suggests a global pattern of magnetic ﬁelds and currents with an inward current near the jet axis and an outward current farther from the jet axis, with these currents closing in the accretion disk and far out in the radio lobes, forming a self-consistent set of ﬁelds and currents together with the implied nested helical-ﬁeld structure. View Full-Text
Keywords: active galactic nuclei; relativistic jets; magnetic ﬁelds; radio interferometry active galactic nuclei; relativistic jets; magnetic ﬁelds; radio interferometry
►▼ Show Figures 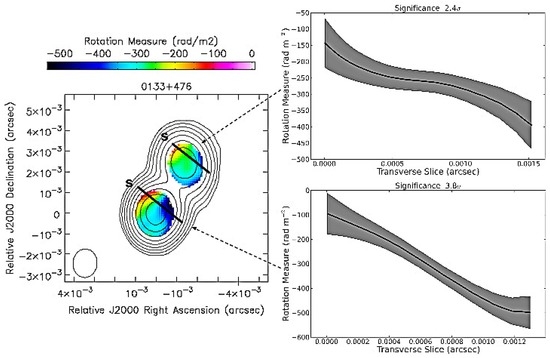