Barriers and Facilitators to Genetic Testing for Familial Hypercholesterolemia in the United States: A Review

Familial Hypercholesterolemia (FH) is an underdiagnosed condition in the United States (US) and globally, affecting an estimated 1/250 individuals. It is a genetic risk factor for premature cardiovascular disease and is responsible for an estimated 600,000 to 1.2 million preventable vascular events. Studies show that FH genetic testing can identify a causal gene variant in 60 to 80% of clinically suspected FH cases. However, FH genetic testing is currently underutilized in clinical settings in the US despite clinical recommendations and evidence supporting its use. Reasons for underutilization are not well understood. We conducted a literature review in the PubMed/MEDLINE database and eight peer-reviewed journals. After filtering for and reviewing 2340 articles against our inclusion criteria, we included nine commentaries or expert opinions and eight empirical studies reported between January 2014 and March 2019 in our review. After applying the Consolidated Framework for Implementation Research (CFIR), we identified a total of 26 potential barriers and 15 potential facilitators (estimated barrier to facilitator ratio of 1.73). We further estimated ratios of potential barriers to facilitators for each CFIR domain (Characteristics of Intervention, Outer Setting, Inner Setting, Characteristics of Individuals, and Process). Findings derived from our systematic approach to the literature and calculations of estimated baseline ratios of barriers and facilitators can guide future research to understand FH genetic testing implementation in diverse clinical settings. Our systematic approach to the CFIR could also be used as a model to understand or compare barriers and facilitators to other evidence-based genetic testing processes in health care settings in the US and abroad. View Full-Text
Keywords: familial hypercholesterolemia; genetic testing; implementation framework; barriers and facilitators; genomic medicine familial hypercholesterolemia; genetic testing; implementation framework; barriers and facilitators; genomic medicine
►▼ Show Figures 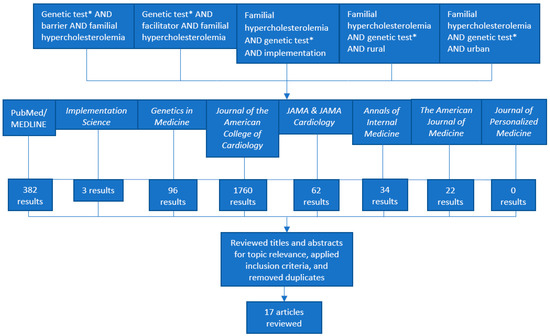