Plitidepsin: Mechanisms and Clinical Profile of a Promising Antiviral Agent against COVID-19
Previous Article in Journal

Calcium Identification and Scoring Based on Echocardiography. An Exploratory Study on Aortic Valve Stenosis
Previous Article in Special Issue

The emergence and rapid global spread of severe acute respiratory syndrome coronavirus 2 (SARS-CoV-2) causing coronavirus disease 2019 (COVID-19) is responsible for the pandemic in which we are now immersed. As of 31 March 2021, over 128,000,000 confirmed cases of COVID-19 and 2,797,000 associated deaths worldwide have been reported. Spain is one of the most severely affected European countries after Russia, France or the UK, with its 3,279,825 confirmed cases, including 75,199 deaths so far [1].
Physiologic or immunologic changes during pregnancy may have systemic effects that predispose women to complications from respiratory infections that lead to maternal and fetal mortality and morbidity [2,3]. However, the clinical characteristics of pregnant women with COVID-19 seem to resemble those of non-pregnant women, and most expectant mothers with SARS-CoV-2 infection show only mild or no symptoms [4]. Thus, maternal and perinatal outcomes seem favorable, especially in women who are asymptomatic or show a milder presentation [5]. Notwithstanding, studies have shown that pregnancy in itself may be a risk factor for death, pneumonia and ICU admission in SARS-CoV-2-infected women of reproductive age [6]. Further, a major risk factor for an adverse outcome in patients with COVID-19 is the presence of comorbidities, including advanced age [7], diabetes, hypertension and obesity [8].
In our country, as in many others, the incidence of SARS-CoV-2 has fluctuated throughout the pandemic and two clear waves were differentiated over the year 2020, the first between March and June 2020, and the second showing a more gradual rise from the summer months, remaining practically stable until the start of December [9]. During the first wave, many people with symptoms of COVID-19 in Spain did not have a RT-PCR test including obstetrics patients [10] and the general population [11]. In the second wave, the clinical severity of SARS-CoV-2 infections seemed significantly reduced, most likely reflecting a lower viral burden as a result of social distancing, increased use of face masks, promotion of outdoor activities and restrictions on gatherings [12] reflecting more detected asymptomatic cases in the population at large.
To address this possible changing pattern of infection, the present study was designed to compare between the two waves maternal, obstetric and perinatal characteristics along with maternal–perinatal mortality–morbidity events in obstetrics patients with COVID-19 in Spain.

This was an observational, analytical, ambispective cohort study with longitudinal follow-up performed according to Strengthening the Reporting of Observational Studies in Epidemiology (STROBE) guidelines [13].
Participants were expectant mothers registered by the Spanish Obstetrics Emergency group, recruited from several Spanish public and private centers. This national registry was started in March 2020 to determine the morbidity caused by COVID-19 in the mother–baby binomial, and to monitor the interventions and measures necessary to improve the care given to these patients [14].
Data were collected using a standard form and entered by the lead researcher at each center after child birth and over a follow-up of six weeks postpartum. All the patients were assessed six weeks after delivery; however, not all the patients had all the variables evaluated at this time.
SARS-CoV2 infection was confirmed by detecting viral RNA by real-time reverse transcription polymerase chain reaction (RT-PCR) conducted on a nasal swab, sputum or throat swab sample [10,15].
Inclusion criteria were obstetrics patients diagnosed with COVID-19 during their pregnancy and parturition. Patients were excluded if follow-up could not be completed over the 6 weeks after delivery.
The study period ran from 1 March 2020 to 3 November 2020. The two waves of the pandemic in Spain were defined according to the data published by the Centre for Coordination of Health Warnings and Emergencies of the Spanish Ministry of Health (REF). Accordingly, all cases produced between 1 March 2020 and 30 June 2020 were assigned to the first wave. During this wave, 249,271 cases and 28,355 deaths due to COVID-19 were registered in Spain [16]. For the second wave, patients included were those diagnosed with SARS-CoV-2 infection between 1 July 2020 and 3 November 2020, which was the last recruitment date. During this latter period, 1,010,095 cases and 8140 deaths due to COVID-19 were registered [17].
The data compiled were: date of diagnosis; number of obstetrics patients with active infection in each wave; maternal characteristics including age, tobacco use, body mass index (BMI) (kg/m2), morbidities (including diabetes, hypertension and others), nulliparous/multiparous, COVID-19 symptoms at triage, presence of pneumonia and need for treatment; maternal laboratory findings including complete blood count and coagulation parameters such as hemoglobin, hematocrit and leucocyte count, lymphocytopenia (lymphocyte count less than 1500 cells per cubic millimeter), thrombocytopenia (platelet count less than 150,000 per cubic millimeter) and activated partial thromboplastin time (aPTT); obstetric and perinatal characteristics including obstetric morbidities, gestational age (GA) at triage, GA at delivery and neonate birth weight; maternal and perinatal mortality; maternal morbidity including both COVID-19-related morbidity (defined as need for oxygen therapy if oxygen saturation in room air at rest was <94%, need for mechanical ventilation and maternal admission to an Intensive Care unit (ICU)) and non-COVID-19-related morbidity such as C-section, hemorrhagic maternal disorders (abruptio placentae, accreta/increta/percreta placenta, postpartum hemorrhage or ruptured uterus) and hypertensive disorders (hypertension, preeclampsia, eclampsia, hypertensive encephalopathy or HELLP syndrome) [18]; and perinatal morbidity including preterm birth (GA at birth less than 37 weeks), Apgar score at 5 min < 7 and admission to the Neonatal Intensive Care unit (NICU).

Data compiled for the study were entered in a Microsoft Office Excel database, version 16.42 (Microsoft, Redmond, WA, USA) and statistical analysis of data was performed using the package Stata 13.1 (StataCorp LLC, College Station, TX, USA).
An analytical study was conducted comparing the main maternal characteristics, laboratory test results, obstetric and perinatal characteristic and maternal/neonatal mortality–morbidity data between the two waves. Significance was set at p < 0.05. Quantitative variables were expressed as the mean (interquartile range or 95% confidence interval (CI)) and categorical variables as number of patients and rates (%) (95% CI). Univariate analysis was performed using Fisher’s exact test, chi-squared test or Student’s t-test, as appropriate.
Next, we compared between the two waves the relationship between maternal and perinatal morbidity and, through multivariate logistic regression analysis, the maternal, obstetrics and perinatal data collected. Variables proving significantly different or clinically meaningful in the univariate analysis (odds ratio (OR) > 1.5, OR < 0.67, or Pearson correlation coefficient > 0.1) were entered in the multivariate analysis. Finally, ORs and 95% CIs obtained in the multivariate analysis were graphically represented for maternal, obstetric and perinatal variables. Those proving significantly different and/or clinically relevant more related with maternal-neonatal morbidity in each of the two waves are provided on a scale of grey.

The authors declare no conflict of interest. All procedures involving human participants were in accordance with the ethical standards of the institutional and/or national research committee and with the 1964 Helsinki declaration and its later amendments or comparable ethical standards. The registry’s objective updates were approved by the coordinating hospital’s Medical Ethics Committee (Ref: PI 55/20) and each collaborating center subsequently obtained protocol approval locally. The registry protocol is available at ClinicalTrials.gov, identifier NCT04558996. For inclusion in the registry, patients were required to sign an informed consent form. In cases when this could not be obtained because of the emergency of the care given or because of insufficient individual protective equipment available, consent was verbal and noted as such in the patient’s medical record.

Our findings suggest that Spanish obstetric patients diagnosed with COVID-19 during the first two waves of the pandemic showed a different diagnostic profile, including more asymptomatic patients during the second wave. Differences were also observed in how the expectant mothers with COVID-19 were managed. Thus, there were fewer C-sections, and maternal and perinatal morbidity events were reduced in the second wave, while the impacts of respiratory symptoms and their severity, including a greater need for maternal treatment, were greater in this latter period. Knowledge of these changing patterns as the pandemic evolves will no doubt help improve the well-being of our patients and their newborns.

The data used to support the findings of the present study are available from the corresponding author upon request. 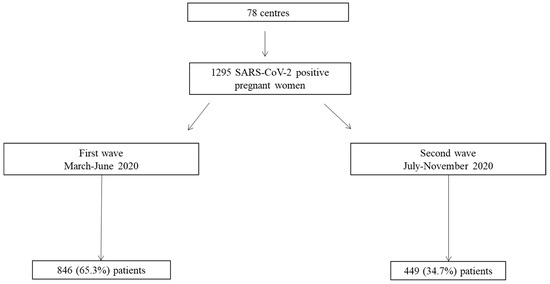 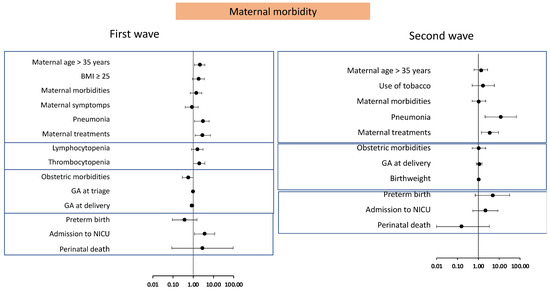 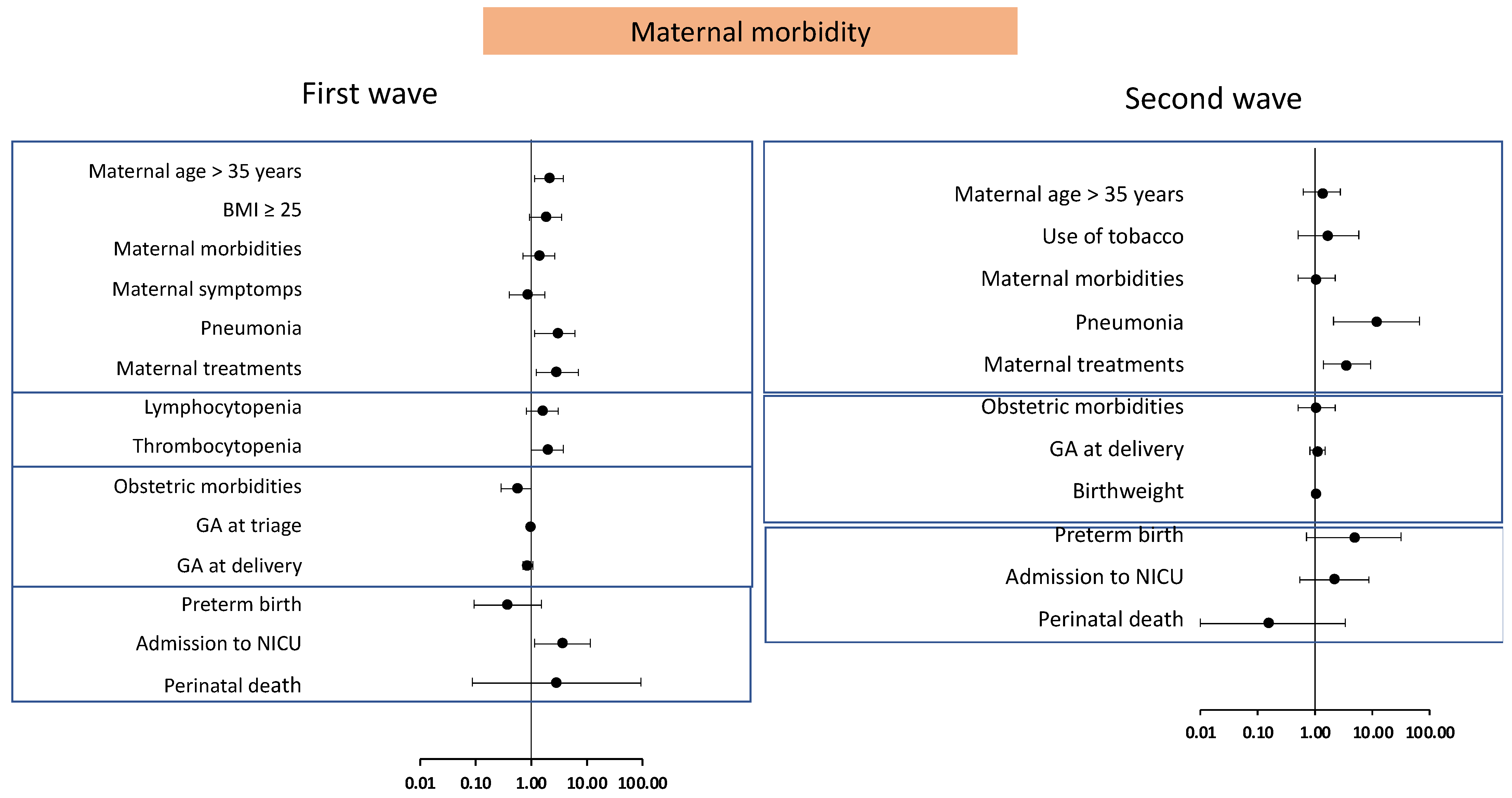