Endothelin-1 as a Mediator of Heme Oxygenase-1-Induced Stemness in Colorectal Cancer: Influence of p53
Next Article in Special Issue

Self-Reported Modifiable Risk Factors of Cardiovascular Disease among Seafarers: A Cross-Sectional Study of Prevalence and Clustering
Previous Article in Journal

:
Aim. This study was designed to evaluate the relationship between microRNAs (miRNAs), miR-126-3p and miR-223-3p, as new biomarkers of platelet activation, and predicting recurrent thrombotic events after acute myocardial infarction (AMI). Methods and Results. The analysis included 598 patients randomized in the PRAGUE-18 study (ticagrelor vs. prasugrel in AMI). The measurements of miRNAs were performed by using a novel miRNA immunoassay method. The association of miRNAs with the occurrence of the ischemic endpoint (EP) (cardiovascular death, nonfatal MI, or stroke) and bleeding were analyzed. The miR-223-3p level was significantly related to an increased risk of occurrence of the ischemic EP within 30 days (odds ratio (OR) = 15.74, 95% confidence interval (CI): 2.07–119.93, p = 0.008) and one year (OR = 3.18, 95% CI: 1.40–7.19, p = 0.006), respectively. The miR-126-3p to miR-223-3p ratio was related to a decreased risk of occurrence of EP within 30 days (OR = 0.14, 95% CI: 0.03–0.61, p = 0.009) and one year (OR = 0.37, 95% CI: 0.17–0.82, p = 0.014), respectively. MiRNAs were identified as independent predictors of EP even after adjustment for confounding clinical predictors. Adding miR-223-3p and miR-126-3p to miR-223-3p ratios as predictors into the model calculating the ischemic risk significantly increased the predictive accuracy for combined ischemic EP within one year more than using only clinical ischemic risk parameters. No associations between miRNAs and bleeding complications were identified. Conclusion. The miR-223-3p and the miR-126-3p are promising independent predictors of thrombotic events and can be used for ischemic risk stratification after AMI.
Keywords:
acute myocardial infarction; risk stratification; microRNA; miR-126-3P; miR-223-3p; antithrombotic therapy individualization

Balancing the intensity of antiplatelet therapy according to thrombotic risk and the risk of bleeding complications is a fundamental objective when optimizing pharmacotherapy in patients after acute myocardial infarction (AMI). The limitation of established risk scores is that many predictors of ischemic events are also predictors of bleeding risk. The use of new thrombotic risk predictors has a significant clinical benefit of choosing the intensity of antithrombotic treatment, especially when they are not related to the risk of bleeding.
MicroRNAs (miRNAs) are non-coding, single-stranded molecules of RNA, 21–24 nucleotides in length. MiRNAs are not translated into proteins but nonetheless, have regulatory functions. MiRNAs can activate or inhibit various messenger RNAs at the post-transcriptional level and also affect protein synthesis at the level of translation [1]. A single specific type of miRNA can regulate the expression of an entire chain of genes, which can encode functionally or structurally related proteins [2]. The presence of miRNAs in the extracellular space allows their use in the diagnosis [3,4,5] and prognosis of patients after AMI [3,4,5]. Prospective studies in small groups of patients found an association among miRNAs and the risk of AMI, mortality, and heart failure in AMI patients [6,7]. Furthermore, several miRNAs seemed to be responsible for platelet activation and are capable of being influenced by antiplatelet therapy [8,9]. The combination of aspirin and clopidogrel or dipyridamole resulted in a decrease in miR-126, miR-150, miR-191, and miR-223 [9]. Moreover, a decreased miR-223 expression was found to be an independent predictor associated with a reduced response to clopidogrel [10].
To the best of our knowledge, no clinical study of a representative AMI patient population has been conducted to monitor the relationship of miRNAs to clearly defined clinical endpoints over the duration of dual antiplatelet therapy (DAPT).
The goal of this study was to assess the roles of miR-126-3p and miR-233-3p, as new markers of platelet activation, for predicting the recurrence of thrombotic complications in AMI patients treated with the recommended intense DAPT.

This was a genetic sub-study of the multicenter randomized PRAGUE-18 study (NCT02808767), which compared treatment with prasugrel and ticagrelor in AMI patients undergoing primary percutaneous coronary intervention (PCI). A total of 1230 patients were enrolled in the study and were monitored for one year. During the 12-month study follow-up, 40.6% of patients switched to clopidogrel. The most common reason was patient cost sharing for study drugs (73.0%), followed by the need for oral anticoagulation therapy (6.1%), adverse effects (8.3%), and other reasons (12.6%). The study did not find a difference in the primary net clinical endpoint (death, reinfarction, urgent target vessel revascularization, stroke, severe bleeding requiring transfusion, or prolonged hospitalization) within 7 days after enrollment. Analysis of the key secondary endpoint within 30 days (cardiovascular death, nonfatal myocardial infarction, or stroke) did not find a difference between prasugrel and ticagrelor in terms of efficiency and safety [11]. Furthermore, an analysis of ischemic and bleeding risk over the duration of the study indicated the safety of very early controlled de-escalation of dual antiplatelet therapy in patients with low thrombotic risk [12].
The genetic sub-study was approved by the multicenter ethics committee and the local ethics committees of the participating centers.

The present sub-analysis involved a total of 598 AMI patients treated with primary PCI who were recruited from 5 of the 14 study centers. Patients signed informed consent to participate in the clinical study and genetic examination. The inclusion and exclusion criteria for the PRAGUE-18 study were described in detail in the original study [11,12]. Patients were divided into groups according to the median miR-123-3p and median miR-126-3P to miR-223-3p ratio.

Blood collection was performed 24 ± 6 h after admission, and whole blood was kept frozen at −80 °C until analysis. EDTA plasma collection tubes were used for blood collection, and all samples were processed simultaneously in the laboratories of BioVendor—Laboratory Medicine, Brno, Czechia.

Based on the observed [14,15] opposite trends for miR-126-3p and miR-223-3p in relation to the occurrence of cardiovascular events in patients with coronary artery disease, the miR-126-3p:miR-223-3p ratio was used as a new parameter for endpoints prediction.

An increased risk of a subsequent ischemic event was defined as the presence of at least one of the following risk factors: age > 65 years, diabetes mellitus (DM) on medication, chronic kidney disease, multiple vascular involvement (peripheral artery disease, prior history of stroke), history of MI, and failed PCI [16].

The median value was selected as a cut-off value for each miRNA based on two reasons: (i) to obtain groups with balanced and sufficient sample sizes and (ii) to apply the same consistent rule based on ranks of miRNAs. Descriptive statistics were applied in the analysis using absolute and relative frequencies for categorical variables and the median with 5th–95th percentile for continuous variables. The differences of continuous variables between two independent groups were tested by using the Mann–Whitney U test. The relationships between miRNAs; the combined ischemic endpoint (cardiovascular death, non-fatal MI, stroke); and all-cause mortality, stent thrombosis, all bleeding events, thrombolysis in myocardial infarction (TIMI) major bleeding, and Bleeding Academic Research Consortium (BARC) >3 bleeding at 30 and 365 days was computed by using logistic regression, and the effect estimates were presented by odds ratios (ORs) and their 95% confidence intervals (CIs). Multivariate logistic regression was adopted (i) for the adjustment of the miRNAs’ influences on endpoints for potential confounding characteristics of patients, including (1) ischemic endpoints: study arm, age, sex, BMI, cigarette smoking, history of hyperlipidemia, hypertension, diabetes, previous MI/PCI/coronary artery bypass grafting (CABG), chronic heart failure, chronic kidney dysfunction, periphery artery disease, BBB, symptom onset to needle time, number of diseased vessels >1, left main disease, and TIMI < 3 after PCI and (2) bleeding endpoints: age, sex, chronic kidney dysfunction, hemoglobin, creatinine, history of bleeding, and proton pump inhibitor therapy, respectively. The adjustment for covariates was performed by using the forward stepwise algorithm with only each given miRNA forced into the model. A multivariate model of ischemic factors and miRNAs was built to compare its predictive power with that of the model of ischemic risk factors only. The influence of switch to clopidogrel on evaluated endpoints was analyzed separately, such that no statistically significant influence on the results as a time-dependent covariate was found. Therefore, it was not included in further analyses using logistic regression with potential confounding factors. Receiver operating characteristic (ROC) analysis was conducted to illustrate the predictive powers of the ischemic risk factors only model and the multivariate model combining ischemic risk factors and miRNAs for the analyzed endpoints, respectively, and the area under the ROC curve (AUC) and its statistical significance were computed. These analyses were conducted by using SPSS 25 (IBM Corporation, Armonk, NY, USA).

The authors have nothing to declare in relation to this work.

All data are available upon request.

The authors of the manuscript express their thanks to the doctors and nurses in the five cooperating study centers who cooperated on the project and contributed to obtaining clinical and laboratory data. Administrative costs of the PRAGUE-18 study were covered by the Charles University Cardiovascular Research Program P-35 and Q-38, Charles University, Czech Republic. Laboratory analysis of miRNAs was performed by BioVendor—Laboratory Medicine and funded by the grant project “Application in the field of in vitro diagnostics“ (project No. CZ.01.1.02/0.0/0.0/16_084/0008832), provided by Ministry of Industry and Trade of the Czech Republic and co-funded by the European Union—European Regional Development Fund, Operation Programme Enterprise and Innovations for Competitiveness. The authors thank Thomas Secrest (Secrest Editing, Inc.) for the English editing. 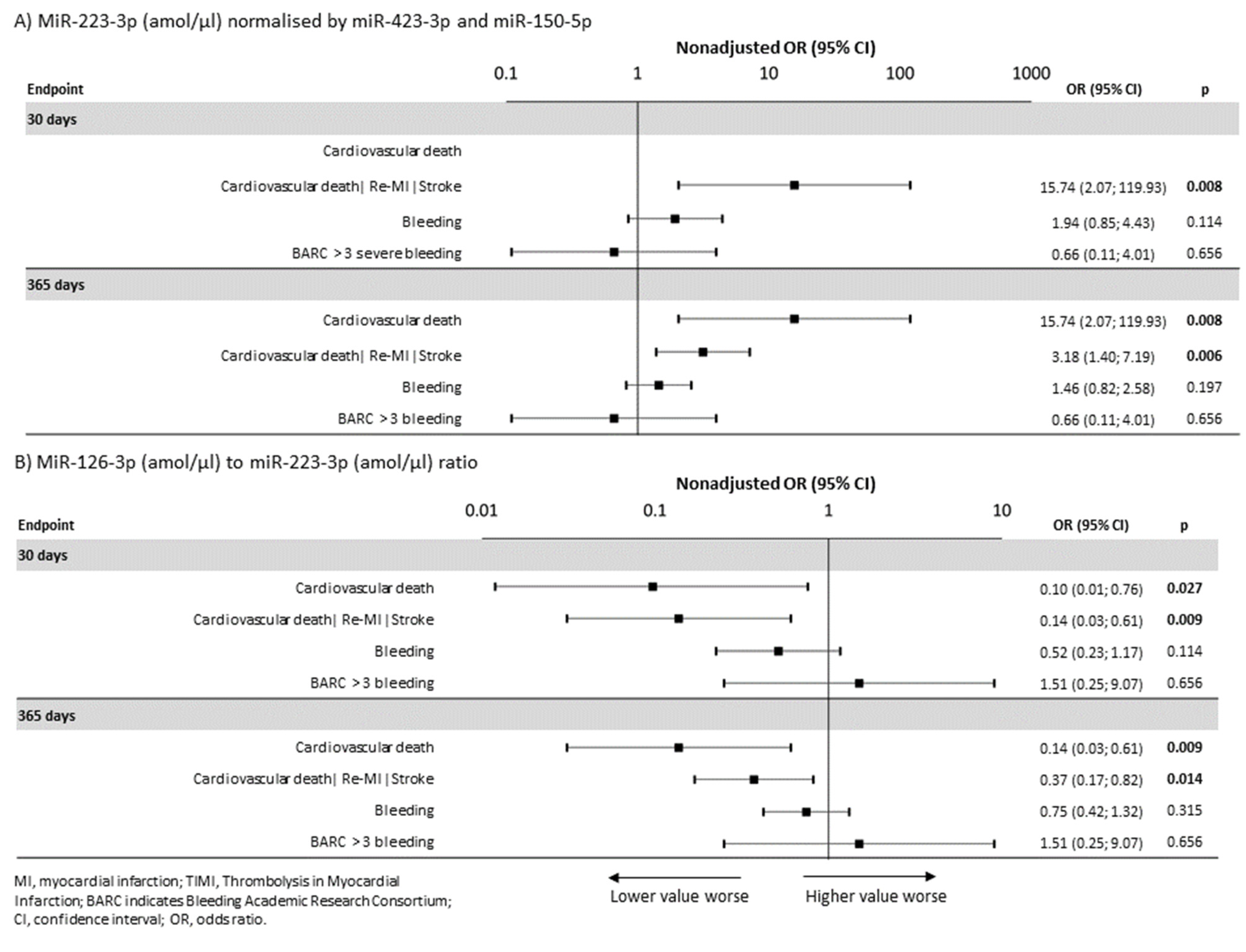 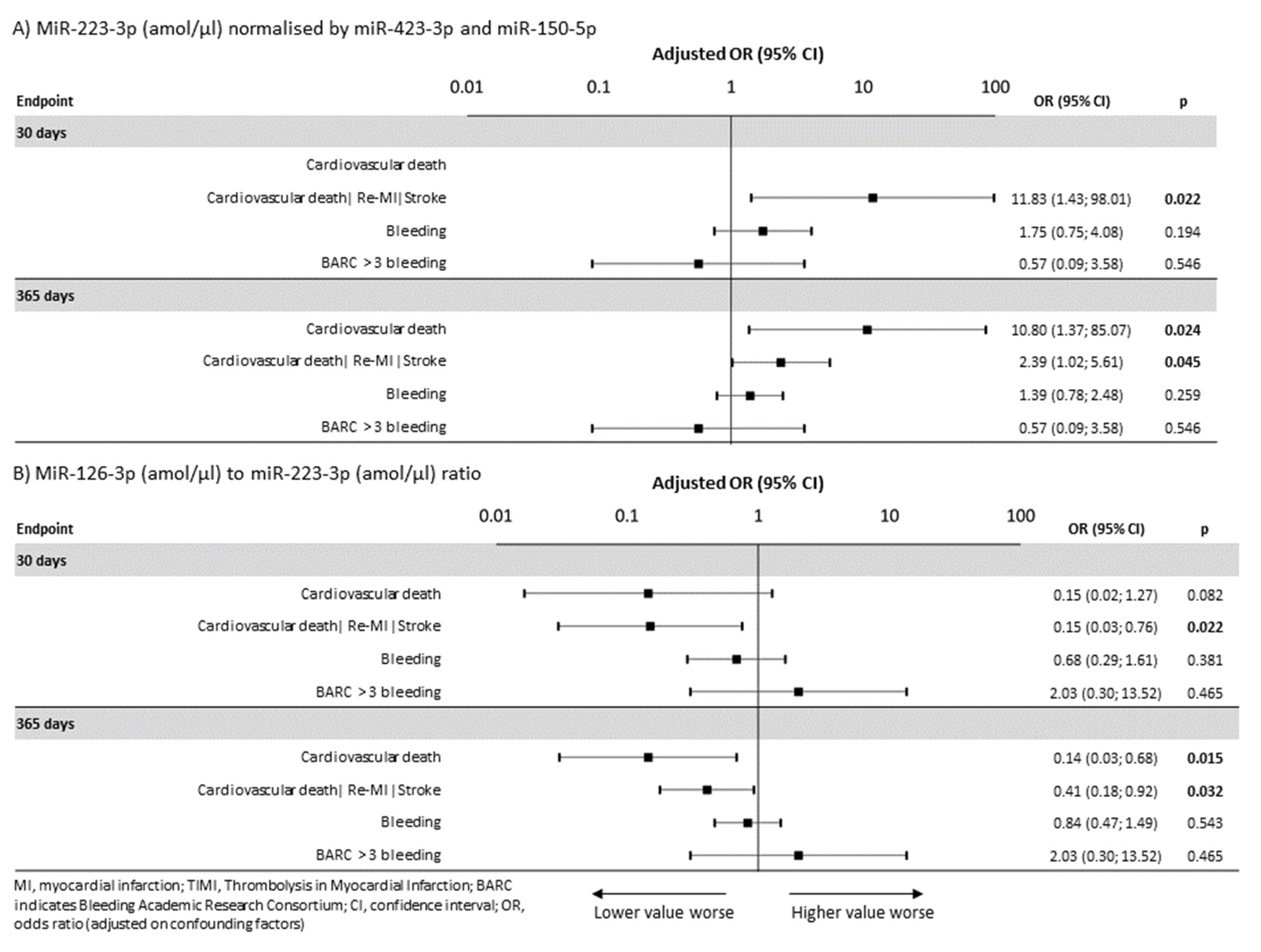